Inwood Street is a classic Dorchester side street, densely packed with three-deckers, but still somewhat insulated from the bustle and bus traffic of the Bowdoin Street business district a block away.

Kevin Chapman no longer lives here, but Inwood is still home for the actor and producer who is best known for playing either a cop or a criminal (sometimes, both) on TV and film. Now 55, he is so connected to this street that he named his film company, Inwood Street Productions.

“It’s the last street where my entire family lived together,” Chapman said during a visit to his old stomping grounds last week, as the Reporter tagged along. The Chapmans arrived here when he was eight years old.

“We thought we had got the house on the hill, getting out of the Mission Hill projects,” he recalls, looking up at his former address, 5 Inwood, a tidy, well-decorated house with flowering plants swinging from the second-floor porch that used to be his perch. “Looking at it now, it’s relatively small, but as a child it was massive.”

He calls up to a current occupant of the house, who is lounging on the porch. “I used to live in that apartment,” he hollers. “That’s good!” the man replies good-naturedly. “I think I left a few things; mind if I come up and get ‘em?” Chapman counters, bursting into a belly laugh. The man on the porch answers in kind.

Chapman can still rattle off the old Inwood family names — “the Haleys, the Butts, the Curriers, the McGees, the Sullivans, the Phippses.” Kevin’s mom raised him and his three siblings here for most of his childhood, spending $325 a month for renting the second-floor apartment.

“A lot of families here were struggling. I think maybe there were two families on the whole street who had a Dad. It was just getting by. But, we were like one big, dysfunctional family.”

The kids on Inwood and nearby Norton and Olney streets found common ground in more than just family hardship. On weekends, they took over the parking lot of the old Meetinghouse Bank across the street and played street hockey for hours on end— until the bells tolled nine o’clock from the top of St. Peter’s.

“That’s how we knew it was time to pack it in.”

Some days, they’d hike up Mount Ida Road to Ronan Park at the top of the hill with its majestic vistas of Dorchester Bay and beyond to go head-to-head with kids from the other side of Bowdoin Street in their chosen game.

When he wasn’t polishing his slapshot, Chapman was hustling himself to or from one of several public schools he attended over an academic life that was roiled, like many, by the chaotic desegregation-era busing order. He attended, variously, the nearby Mather School on Meetinghouse Hill, the Holmes School in Codman Square, the Holland School off Geneva Ave, and the Grover Cleveland in Fields Corner.

“In the sixth grade, I was sent over to the King School on Lawrence Ave., which wasn’t the most convenient location,” he says. “I never went to the same school two years in a row. We were constantly shipped somewhere else.”

But when he was out of the classroom, Chapman stayed grounded in his immediate environs. The young “Chappy” earned extra coin by stocking shelves at Brother’s Market— now America’s Food Basket— for $1.50 after school and $3 all day on a Saturday. He shined shoes at the Horseshoe Tavern. Later, he watched his older sister Gail get married inside St. Peter’s Church, the monument to Catholicism and Puddingstone engineering that still dominates the eastern end of Bowdoin Street.

“Anytime anyone asks me, I always say St. Peter’s Parish, that’s where I grew up,” says Chapman.

Other jobs came later. He wheeled tour buses through tourist-trap Boston, cleaned up at a pig farm up in Holliston, ran a parking lot next to the State House, and, for a time, worked as a bouncer at a Boston comedy nightclub. Chapman also worked as a teller at South Boston Savings Bank— a role that he says has informed one of his most high-profile local gigs of the last few years — serving as the spokesman for the City of Boston Credit Union. (He has maintained his membership with the credit union since his days as a city employee.)

His last career turn before he became a professional actor was the most fortuitous for more than one reason. When the late Boston Mayor Thomas M. Menino was first elected in 1993, Chapman, who had supported his campaign, applied for and won the job of City Hall’s neighborhood services coordinator in Dorchester’s District Three. It was – and is – grueling and thankless work, carrying the mayor’s banner in front of sometimes disgruntled community groups on a nightly basis, responding to incidents and accidents of all sorts when they happen.

But the job had definite upsides, too. Chapman met his future wife, Meaghan Kennedy, at one of Father Dan Finn’s monthly community meetings at St. Mark’s on Dorchester Ave. They now have two children.

Paying his dues on the nightly Dorchester political beat eventually led to a promotion: He was assigned to head up the now-defunct Boston Film Office, where he provided logistical support to filmmakers shooting pictures in the city. The job put him in daily contact with people like Ted Demme, the late filmmaker who gave Chapman a part in the Denis Leary film “Monument Ave.,” which was set in Charlestown.

From there, his career snowballed, as directors filming in Boston found a willing apprentice in the brawny, 30-something Dorchester “kid.” At that point in his life, Chapman, who admits to having yearned for the spotlight much earlier, was ready for the challenge.

In a 2001 interview with the Reporter, he admitted that he had always yearned to act, but he got off to a late start, in part because he had a touch of self-doubt sowed in by some of his early experiences in the neighborhood.

“There’d always been that constant corner badgering,” Chapman told the Reporter later on, in 2006. “Acting was always in the back of my head, but there was also the evil twin, I guess, saying, ‘You’re a kid from Bowdoin Street. You can’t do that.’

“You really have to be secure in your life as a person to pursue something like that,” he said. “After about the third or fourth job you say, ‘I must be okay at this because they keep hiring me.’”

In fact, Kevin Chapman has been in demand. 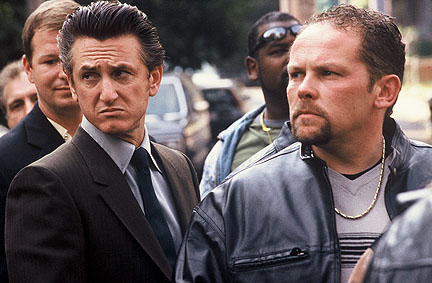 Most recently, he ended a very successful five-season run portraying NYPD Det. Lionel Fusco on the popular series, “Person of Interest.” He is one of the film industry’s go-to character actors with credits that will soon include a brand new Showtime police drama series set in his hometown— “City on a Hill.” Produced by Matt Damon and Ben Affleck, the series— which is set to begin production soon, with a tentative premiere date set for next year— is purportedly about the so-called “Boston Miracle,” a 1990s setting that has already rankled some Bostonians, since early buzz is that the show will lean more heavily on the hackneyed theme of Charlestown as the home of Boston Irish bank robbers than on the streets of Roxbury and Dorchester where the true carnage of the early 90s was so much more acute.

Chapman’s character – Dickie Monogue – is a cop with a conscience. “I play a Boston narcotics officer who is kind of the antagonist for Kevin Bacon’s character,” he said. “When you first meet this guy, you kind of assume that he may be the one who is morally challenged, and then, as the story unfolds you realize that he is probably the guy whose moral compass is calibrated.”

Chapman says he’ll bring his own understanding of how policing and community activism dovetail to drive down crime rates. He had a unique vantage point to observe this interaction as Tom Menino’s eyes and ears in much of Dorchester — attending crime watch and civic association meetings, serving as a liaison to other elected officials and police— and helping to direct city services to constituents.

“It was eye-opening to see how active this community is,” said Chapman as he walked his dog Maverick along the crest of Ronan Park last Thursday. “I didn’t realize how many community groups and crime watches there were, so many people I met over time who are really invested. It was a great education for me.”

In that job, Chapman helped the city choose targets for programs like the Top Ten Most Wanted Drug Den, a task force that picked off vacant properties that were— back then— havens for sales or drug use.

“When I was there working for the city, I didn’t really reflect on what was happening. It was a period of time where everyone pulled together. No one person can take credit for it.”

Chapman isn’t part of the writing team for “City on a Hill.” He has learned from experience that his role will likely stay on the periphery. Unless asked, he’s not likely to offer much input beyond his own character. “If they do, I welcome it,” he said. “If they don’t, I know what my approach is going to be for my character and how I’ll find the truth in my character.”

The notion of character is a frequent theme with Chapman, who says he stays grounded to the roles he takes on by his formative years soaking up the people he grew up with in the Bowdoin Street neighborhood.

Reporter editor Bill Forry can be reached at bforry@dotnews.com.