A new memorial to Mark S. Charbonnier and Richard "Ricky" Dever has been installed in Neponset II Park. It will be dedicated on Sunday at 11 a.m. Bill Forry photo

A striking new granite memorial honoring the memory of two Dorchester men who gave their lives defending the public will be dedicated in a ceremony at 11 a.m. this coming Sunday, May 6, at Neponset II Park. The memorial to the late Trooper Mark S. Charbonnier and Sgt. Richard ‘Ricky’ Dever, a Suffolk County deputy sheriff, has been erected just steps from the Granite Avenue drawbridge inside the waterfront park.

Sunday’s ceremony will cap a three-year effort to raise funds and support for the memorial— which was aided by legislation filed by state Rep. Dan Hunt. “I’m proud to have worked with the friends and families of State Trooper Mark S. Charbonnier and Deputy Sheriff Sgt. Richard “Ricky’ Dever” to get this fitting memorial to the finish line,” said Hunt. “I’d like to thank the governor and DCR for seeing it through.”

Charbonnier, a six-year veteran of the State Police was murdered by a gunman while on duty on Route 3 in Kingston in 1994. Dever was killed in 2005 as he tried to stop a disturbance in a Charlestown bar caused by a man who later stabbed him to death at the scene.

As the memorial seeks to make clear in words etched on a stone bench facing three large granite markers, “It’s not how they died that made them heroes, it’s how they lived.”

Mark was older than Ricky by about seven years— but the two “Ronan Park kids” shared a bond with many of their contemporaries from St. Peter’s parish and Meetinghouse Hill. One of the three markers explains their common roots and includes a simple, but poignant salute: “Mark and Ricky: American Heroes, Dorchester Born, Boston Strong.” 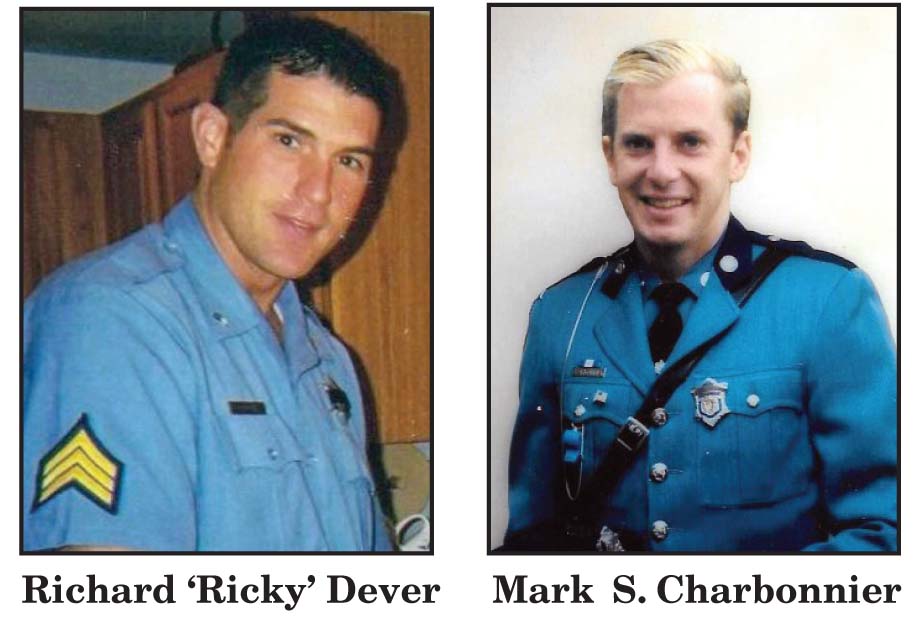 Mark’s younger brother, Steve Chabonnier, himself a veteran Boston police officer, was best friends with Ricky Dever. Both grew up looking up to Mark— and followed him from St. Peter’s School to Don Bosco Tech to law enforcement careers.

“Mark was a guy who everyone looked up to in Ronan Park and St. Peter’s,” explains Steve. “He was such a leader, and it was a tight-knit community. It was a great area to grow up in and a great crew.”

You can expect to see a large crowd assemble for the dedication and for an after-party planned inside— and outside— the nearby McKeon Post on Sunday. Last April, an overflow crowd packed Florian Hall for a fundraising “time” that raised $40,000 to help fund the project. SullyMac, the company based in Port Norfolk, has been instrumental as a donor and in-kind supporter. Teddy Ahern, another childhood friend of both men, has been a driving force along with Dorchester’s Feeney Brothers company, which donated labor and more.

Steve Charbonnier says the families could not be more pleased with the results. “It used to be an old industrial site. Now that it’s a beautiful park, right along the river, you can sit there on a bright sunny day. It’s a nice place to sit with the bench.

“But I think this is for the good that’s come out of Mark’s death and Ricky’s death. All the money that’s been raised in their names to help with scholarships for Dorchester kids and youth leagues here.

“It’s a legacy for Mark and Ricky. So much is within walking distance. You see it from the expressway. Mark and Ricky were proud to come from Dorchester and to [this] tells their story for people who might not know about the sacrifices they made for Dorchester and Boston.”