A rendering shows an early concept of what could be built along Morrissey Blvd. between the former Globe property, far left, and JFK-UMass station.
Image courtesy Center Court Mass LLC

Proponents of a pair of residential towers along Morrissey Boulevard offered their long-term vision for their stretch of property along the corridor during a briefing at the Columbia-Savin Hill Civic Association’s monthly meeting on Monday.

Through a three-phase plan that could unfold over a decade or more, Center Court Partners intends to transform the parcels between the former Boston Globe site and the Hub 25 buildings near JFK/UMass station into a streetscape of towers with an internal roadway.

An existing Columbia Point Master Plan— published in 2011 by the-then Boston Redevelopment Authority — still serves as a general guide for the parcels controlled by Center Court, but a lawyer representing the development team noted that present-day conditions along Morrissey have changed significantly since the master plan was conceived.

“We’re trying to deal with the realities as we see them today and prepare and present a plan that’s going to work with the community and provide the housing that’s called for in the initial master plan,” the lawyer Dennis Quilty said during a presentation.

The Center Court team last visited the civic group’s planning committee in March to pitch two tall residential towers for the 75 Morrissey parcel, a site that was last used as a TV station.

“Questions arose almost immediately about what goes on in the other parcels,” said Quilty. To help contextualize the towers, developers rendered a potential future view of the Morrissey parcels between the Globe site and the JFK UMass MBTA station. The plans are very preliminary, Quilty emphasized. Nothing has been filed with city authorities and no specific timeline has been set, he said.

The latter sites involve long-term leases stretching into the 2030-2040 range, which could limit the development timeline.

At the meeting, developers floated a possible solution. If their development rolled through in three phases, they could construct a new Star Market at the current Beasley site, allowing the grocery store to stay open during construction and then slide seamlessly into the new site before the building that houses the current supermarket would be demolished in phase three.

Renderings show the phase one buildings as two towers – a slightly reduced 24 and 21 floors, respectively– next to the forthcoming The BEAT site on the former Globe property. The buildings at 75 Morrissey would include 694 residential units, 11,400 square feet of retail, and two levels of parking with 374 spaces. 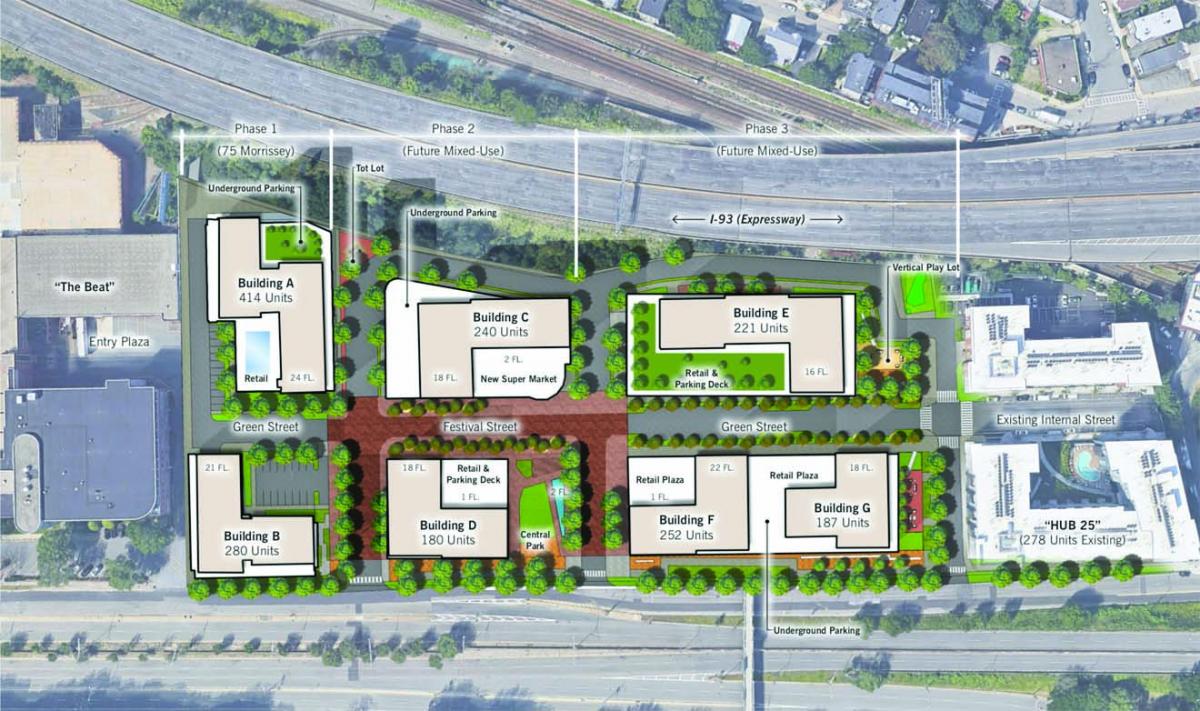 A rendering shows how the owners of several Morrissey Boulevard parcels between the former Globe property and JFK-UMass station might phase in new buildings over time. The development team stresses that these designs are purely conceptual in nature. Image courtesy Center Court Mass LLC

Some in the civic hall were openly skeptical that this amount of parking would be sufficient or that the Red Line and commuter rail would be able to pick up the increased load. The development team said their traffic engineer is confident that expected improvements to the trains would be sufficient to handle the need, coupled with a general move away from cars in the coming years.

Down the line, Center Court envisions four or five new buildings in phases two and three, accounting for 1,080 units of housing, 86,500 square feet of retail, including a 60,000-square foot market, and around 1,000 parking spaces.

An existing roadway through the middle of the Hub 25 site could be extended through the new project, creating a tree- and park-lined internal road that could in part serve as a festival or farmers’ market space if needed.

Other parks and play lots are included in the potential design. The developer and architect David Raftery said there have been meetings between nearby stakeholders like Boston College High School, The BEAT developers Nordblom Co., UMass Boston, future Bayside developers Accordia Partners, and Corcoran-Jennison, looking at “the macro picture” for the area.

Todd Freemont-Smith of Nordblom noted at the meeting the Santander site at 2 Morrissey Blvd. at the entrance to Columbia Point is under agreement as well, so that is an additional parcel to watch.

Coordination between major development players speaks to concerns from civic members like Don Walsh, who objects to a “piecemeal” approach “where everyone goes their own way” around Columbia Point.

The developer team will return to the planning committee and the general membership as the process moves along.