The parade of renovations, revitalizations, and redesigns at the city’s libraries continued this week, with the idea of a mixed-use new library for Fields Corner given a positive reception at a public meeting of some 40 attendees on Monday night at the branch on Dorchester Avenue at Park Street.

Several Boston Public Library sites are being considered for some sort of mixed-use purpose, said BPL President David Leonard. In Fields Corner, that may mean a two-story library with up to three additional stories of some other use above. Housing, commercial, community or nonprofit space are some of the options on the table.

“What we’re doing, and we’re doing this with our city colleagues, is really explore these properties as city assets and is there a way to both deliver a fabulous new library that’s responsive to the community but also address some of the other challenges the city is experiencing,” Leonard told the Reporter. “That won’t work for every single location for a multitude of reasons, but we have between three and five of the projects that we’re looking at over the next five to seven years where we’re at least going to explore the idea.”

The current Fields Corner branch, which was built in 1969, is now in the process of using a $12.1 million investment to come up with a facility assessment, develop a building program, and support the construction of a new facility. It is a long process; the team is in the midst of 12 months of programming, including three to four public meetings, which will be followed by a review period, after which a 12-month design phase will include three to four additional public meetings before a bidding and construction phase that could last up to two years.

Matt Oudens of Oudens Ello Architecture and Kevin Deabler of RODE Architects reviewed both the current library setup and the maximum program and space needs of the new facility. Issues with the current building’s mechanical systems and its age mean “a lot of fundamental things would need to happen” on the site even if they just rehabbed the space, Oudens said.

Priorities so far include a bigger library with a second floor; more and better meeting space, including conference rooms and study rooms; indoor-outdoor connections; better designated child and teen spaces; and a diversified collection. Some at the meeting asked for dedicated space for other populations, like the elderly.

At its maximum size, Oudens estimated, the current 8,557-square foot library could be transformed into a 14,970-square foot facility with more than double the amount of community space. Deabler added that the building’s corner lot placement with good transit access should support the potential new library even if the building height tops out at five stories.

“I just want to say I love the idea of a mixed-use building,” said Jacquie Bishop, of the St. Mark’s Civic Association, who added that she was hopeful that there could be “a way to make this a library and community-use building.” She suggested a public radio component like the one at the Copley location.

In that vein, Leonard noted that the forthcoming permanent Chinatown library is primed for mixed-use because its location in a high-density area makes it highly unlikely that the library would occupy a stand-alone single-use building. A $100,000 study is included in the mayor's Fiscal Year 2020 budget for a new Codman Square branch.

Much of the meeting lingered on issues of process, with those in attendance asking for a dedicated smaller group of community advisors to meet more regularly and offer direct feedback on any potential plans. Some said that the standard larger group format was not conducive to offering helpful notes and was not the most productive forum. Just over half an hour at the start of the Monday night meeting was consumed by these critiques before architects and BPL officials were able to begin the planned presentation.

Library officials said they would make public the list of members of the Community Advisory Committee and they encouraged residents to reach out to the local Office of Neighborhood Services liaison if they believed they should be part of the CAC. Leonard said he would confer with his cohort and report back with either plans for additional meetings or clarification on channels where additional comments could be submitted and library data shared. 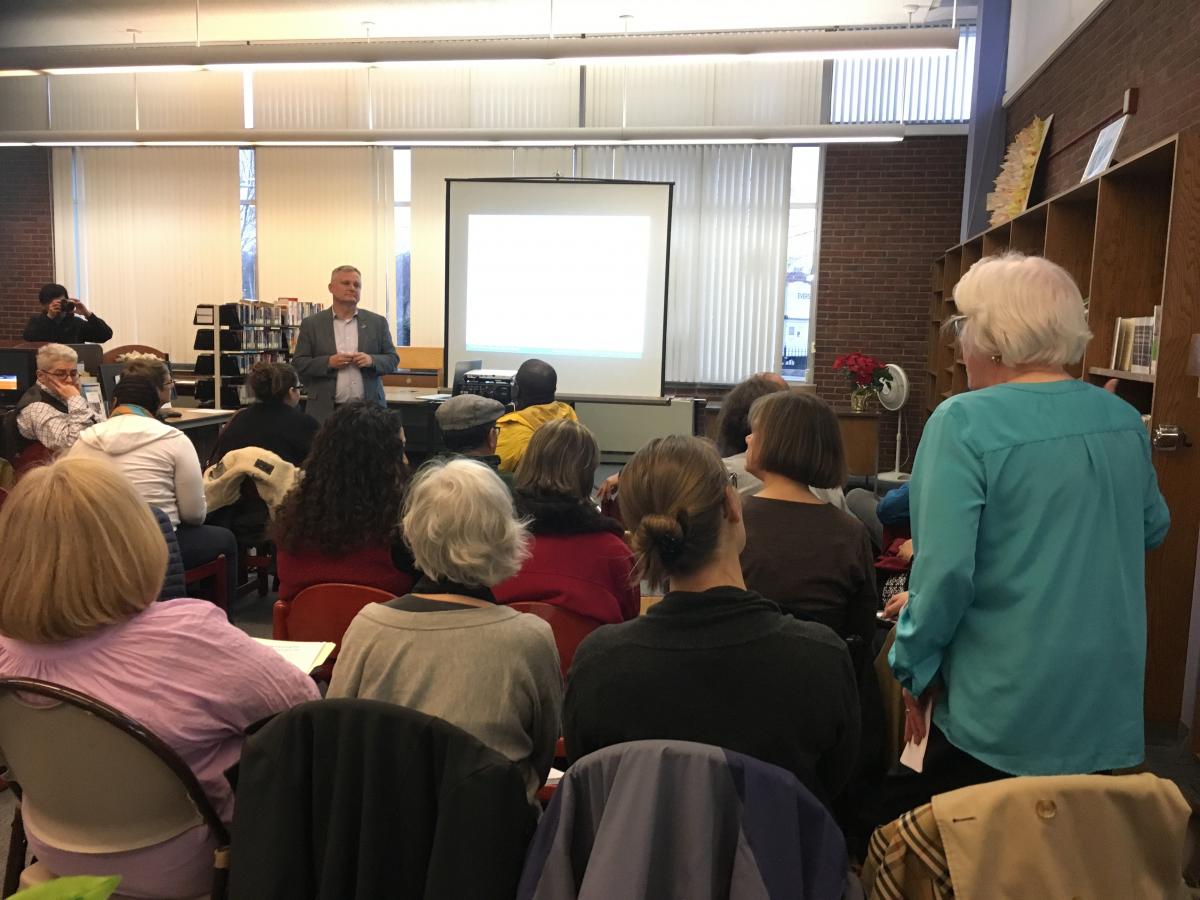 Although some at the meeting said they had heard frustration “almost universally” from the Friends of the Adams Street Library about their planning process, the moderator on the Adams Street group’s Facebook page said, “In my opinion, the process was fair and well presented each time the team came to the library. The BPL, Neighborhood Development, Mayor’s Office and the architect were all topnotch and respectful to the entire Adams St. community. They answered questions fairly and made changes to their original plans based on community feedback.”

It was bumpy in places, the Friends group acknowledged, but the BPL team worked to incorporate desired changes.

The Adams Street plan has evolved during rounds of input so far, library officials noted, all part of a “healthy process” of revision. “I’ve seen designs go through pretty radical feedback, based on what the community was prioritizing, but it’s not just “Oh, we’ll just change the color on this room,” Leonard said. “It’s been, in some cases, a radical shift of the site configuration, in response to community feedback.” This is how the process should work, he said.

BPL spokeswoman Lisa Pollack said officials estimate the Adams Street design will be completed in a month or so. They plan to close the branch at the end of day on July 12, with service continuing at the Lower Mills and Fields Corner branches for Adams Street patrons. If all goes smoothly, Pollack said, construction could begin at the end of July or early in August.

The Lower Mills branch is also in line for a $226,000 spruce-up. The branch will be closed at the end of service next Friday (April 19) through about mid-summer. During that time, workers will replace the Borrowers Service desk and flooring throughout the branch, paint the site, and arrange furniture in the adult area to accommodate the new Borrowers Service desk.

One resident, Candelari Silva, asked the team if they had reached out to the abutting businesses in Fields Corner both for neighborly reasons and to see if the overall streetscape was being factored into the planning. They have not yet was the answer. Across the city, Silva noted, “a lot of these properties keep coming to play within a few months of each other, but nobody’s talking to each other, so there’s been no shared sense of design.”

As the priority in this case is to see first what can be done with the property already owned by the city, library officials said they are focused on the existing Fields Corner site but would reach out to abutters at a later point in the design process.

In terms of planning out across multiple properties, Leonard spoke favorably of the Uphams Corner revitalization project, where an $18 million new branch library is planned for the site of a former bank building near the Strand Theatre.

“The process I’m really liking right now is Uphams Corner,” he said, “where a lot of the properties are discussed together and are really in conversation with each other, and I’m thinking that’s going to go really, really well. It’s a little more complex, but there are some good lessons to be learned from that about how to do that. Once we get past this exploratory phase and say, “Yeah, there’s real merit to this,” then we’ll talk to the other [business neighbors].”

Meetings regarding final Request For Proposals language have been happening over the past year in Uphams Corner. And months of meetings lie ahead for the Fields Corner branch alone, Leonard said, with the next larger public meeting expected in August.

“We’re still early enough that there is a great opportunity to look at the trends in the neighborhood,” he said, “to see if is there a displacement opportunity that we could help alleviate, but also to understand what are the community needs for a library that will be there for the next 10, 20, 50 years.”

Editor's note: This story has been updated since publication with new library investment from the mayor's budget announcement.