Federal agents on Monday began rounding up alleged members of the Norton/Olney/Barry Gang, whom they accuse of being a full-service gang that, when not busy shooting rivals, dealing drugs, pimping women and robbing people at gunpoint, made lots of rap videos, often featuring scenes from the neighborhood, sometimes on rival turf as a way to taunt other gangs.

In the most serious of four separate cases unsealed in US District Court in Boston yesterday, 15 alleged gang members were charged with RICO violations that include murder, attempted murder, conspiracy to commit murder, armed robbery, narcotics trafficking and sex trafficking across state lines for incidents in Dorchester, New Bedford, Stoughton and Brockton and in Connecticut and Maine.

In two separate cases, 11 more alleged members were charged with dealing cocaine and fentanyl in Dorchester and on Cape Cod. One alleged member was charged separately with bank fraud on the South Shore; four others were charged individually for crimes such as being a convicted felon caught in possession of a firearm. Complete list.

According to an affidavit by an ATF agent in the investigation, three alleged members of the gang - who sometimes called themselves Head Shot Mafia and who have ties to the Westover Street Gang - were responsible for an incident on Feb. 20 of this year in which one kidnapped a five-year-old girl on Dorchester Avenue.

When they spotted a man get out of his car to get some Vietnamese takeout, leaving the keys in the ignition, one ran over, got in and drove away - with the man's daughter in the back seat. The thief let the girl out in Randolph, physically unharmed.

According to the affidavit, gang members, most prolifically Michael "G Fredo" Brandao, frequently made YouTube rap videos, that extolled their shootings and other crimes, mourned murdered members and threatened rivals, in particular, the Cameron Street Gang, with which NOB had a particularly vicious feud.

From the video, a flaming Houston cap, of the sort Homes Avenue members would wear: 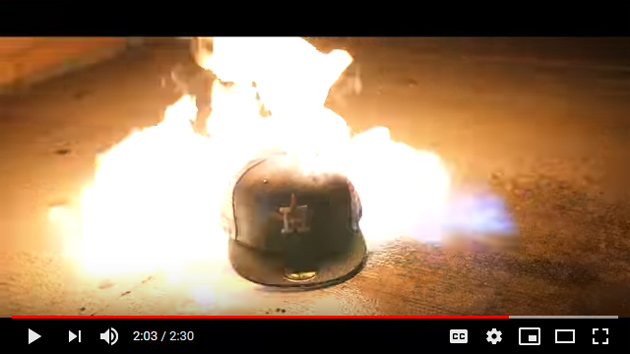 Among the specific crimes gang members were charged with are three murders and one failed murder attempt in Dorchester:

Sept. 5, 2017: Albert Monteiro shot to death in a barbershop, in a hit targeted at the Cameron Street Gang, according to the affidavit. "Based on ballistic evidence, the pistol used for this prior shooting was recovered from NOB member Alidio Barbosa's possession on or about September 11, 2017." Also:

"Based on the BPD homicide investigation, two individuals arrived on a scooter (a vehicle used by the gang as it can be driven to locations inaccessible by car). The individual on the back of the scooter walked into the barbershop and shot the victim multiple times. At the time of the murder, defendant Ricky Pina was on state court-ordered GPS monitoring, which provided information as to his location on the date of the murder. The GPS information identified that, in a short time period leading up to the murder, Pina drove past the area of the murder multiple times - consistent with conducting reconnaissance for the murder."

"Based on the BPD investigation, the two shooters approached from the area of an adjacent alley before they started shooting. The victim was shot multiple times. Per witnesses, prior to the murder, a vehicle (subsequently identified by investigators as a Chrysler Pacifica) was seen by the victim and others driving slowly past them - consistent with setting up a shooting. Witnesses told BPD investigators that the victim stated out loud that one of the people in the vehicle was "G Fredo" - the street name for defendant Michael Brandao. Per witnesses, the victim also identified the “kids” in the vehicle had “smoke” [a conflict] with the victim. The vehicle was observed by witnesses driving slowly to the area a second time. The shooting took place shortly thereafter.

"Less than six weeks after the murder, Brandao put out a rap video titled They Don't Know, which includes several other NOB members/associates, including the NOB member/associate who rented the Pacifica. In the video, Brandao references the murders of two NOB associates. Brandao further states that they got revenge for one of the murdered NOB associates, and notes that he “ran up and dropped a body.” The video also recreates a murder that shares the same circumstances as the murder of John Doe 4 [Colon]."

July 14, 2019. Adilson Barbosa shot in the head. Phone and surveillance-camera evidence suggests a NOB member had something to do with Barbosa's murder as he stood at the corner, waiting for the light to change so he could cross. On Feb. 8, 2020, Barbosa's twin brother was murdered in Brockton. ATF suspects this was NOB-related as well.

May 17, 2018. Two men shot on Winter, a street in Cameron Street Gang territory. One was a Cameron Street member, but one was a NOB member - he got out of his car and opened fire on a group of men, but they had guns, as well, and fired back - and proved better shots, hitting the NOB shooter and the NOB driver.

The RICO charges also include driving women across state lines - two runaways from Dorchester to Connecticut and a separate woman to Maine - to offer them up as prostitutes on backpages.com.

In a separate case, nine alleged NOB members are charged with running a coke and fentanyl ring in Dorchester - where one member continued to sell drugs even though he was on house arrest and another didn't let the fact that he was on probation for child rape stop him, according to a separate affidavit by the FBI agent.

This mini-ring of NOB members was done in by an undercover operation in 2017 - in which one member was recorded offering a sort of affiliate deal to one undercover officer posing as a street-level drug dealer - the member would pay the supposed dealer in fentanyl for every new customer he recruited.