As design plans for the proposed Dorchester Bay City project on Columbia Point begin to take form, city planners and developers will consider feedback from a 25-person Community Advisory Committee (CAC) comprised of architects, organization heads, and other local residents from surrounding Dorchester neighborhoods. The CAC was scheduled to hold its first meeting virtually Wednesday night, with five more CAC and public meetings slated for October, November, and December. The first community-wide virtual forum is set for Oct. 19 at 6 p.m.

Input provided by the individuals on the CAC, who hail from a wide range of civic and institutional backgrounds, are intended to help the developers of the site proceed with a holistic vision that takes into account the needs of the neighborhood.

Rosemary Powers, president of Cristo Rey High School in Savin Hill and a Savin Hill resident, said she was honored to serve on the committee and highlighted the potential for the project to boost low-income families in Dorchester.

“The main things I think we need to pay attention to are height, density, and transportation impacts, and as far as the built-out site goes, climate mitigation,” Powers said. “Another thing to pay close attention to is the impact on Dorchester’s low income communities, and the ability for our community to benefit from the development through workforce training, or other small business development opportunities. For folks from Dorchester and South Boston, how do we make sure they’re sharing in the success of the project and in a position to be included, but also how do we make sure our students have an opportunity to participate--for example, being able to view the site and including them in discussions around climate impact.”

Another Dorchester resident on the committee, Kevin Deabler of RODE Architects, advised patience and cautioned against “judging a book by its cover” for folks who may have strong feelings about any preliminary plans or renderings.

“I think it’s too early to have a reaction to it other than just being excited that this investment has come into Dorchester,” Deabler said. “It’s a massive opportunity for the neighborhood, for that area to be put to use...reacting to anything we see right now is probably premature until I’ve had a chance to talk to the development team.

But I do know they’re working with the Columbia Point Master Plan, they’ve borrowed from that heavily which is the right thing to do, and made a really strong focus on the landscape. They’re already listing out ways they can mitigate any impacts, and I trust they’re adopting a lot of the city’s guidelines for climate readiness.”

Ed Roche, a member of the advisory committee with nearly 50 years of architectural and urban design experience under his belt, told the Reporter he is excited for the opportunity to help guide what he believes to be “the biggest development in the history of Dorchester.”

A native of Port Norfolk, Roche knows the Columbia Point site intimately, having served as the assistant director of efforts to form the Boston Harborwalk at the Department of Harbor Planning and Development under Mayor Ray Flynn. Since the property was acquired by UMass Boston in 2010, Roche has recognized it as “an open book” with loads of potential.

“The best thing that has ever happened to this site was when Dr. [Keith] Motley bought it— that was a principal, key moment in the history of the development of the site.”

Motley’s leadership paved the way for this current proposal, said Roche, who cautioned against repeating past mismanagement mistakes related to construction projects at UMass Boston.

Traffic flow is also a prime concern for Roche, who highlighted the project’s proximity to Morrissey Boulevard and Day Boulevard, and its location on key conduits connecting the South Shore and downtown.

“I know what kind of problems we face every day and have faced historically...with over 20,000 vehicles a day going through Neponset Circle, I don’t think you can ignore it,” he said. “There has to be questions as to how we begin to talk about the effect it will have on the rest of Dorchester and also going into downtown and streets that people will be bypassing...who’s taking charge of the traffic?”

Roche indicated a need for action on the part of the state’s Dept. of Conservation and Recreation (DCR), whose pending redesign of Morrissey would likely dovetail with the buildout of the Dorchester Bay City project. The department has been more or less silent on the redesign’s progress for several months, he pointed out. But transforming the thoroughfares by Columbia Point could make a large project more feasible.

“I’ve long been an advocate of the parkways but the nature of the recent growth and development--which I welcome--has overtaxed the parkways and boulevards to the point that they’ve kind of lost their purpose from what they were meant to do in the 30s. They might as well just be an expressway, and we need to take some pressure off of them.”

Roche posited that a water transit stop--which is already being considered for possible Boston Harbor Tours at a Fallon Pier next to JFK Library--and improved shuttle bus connection with JFK/UMass station could alleviate some of that pressure. 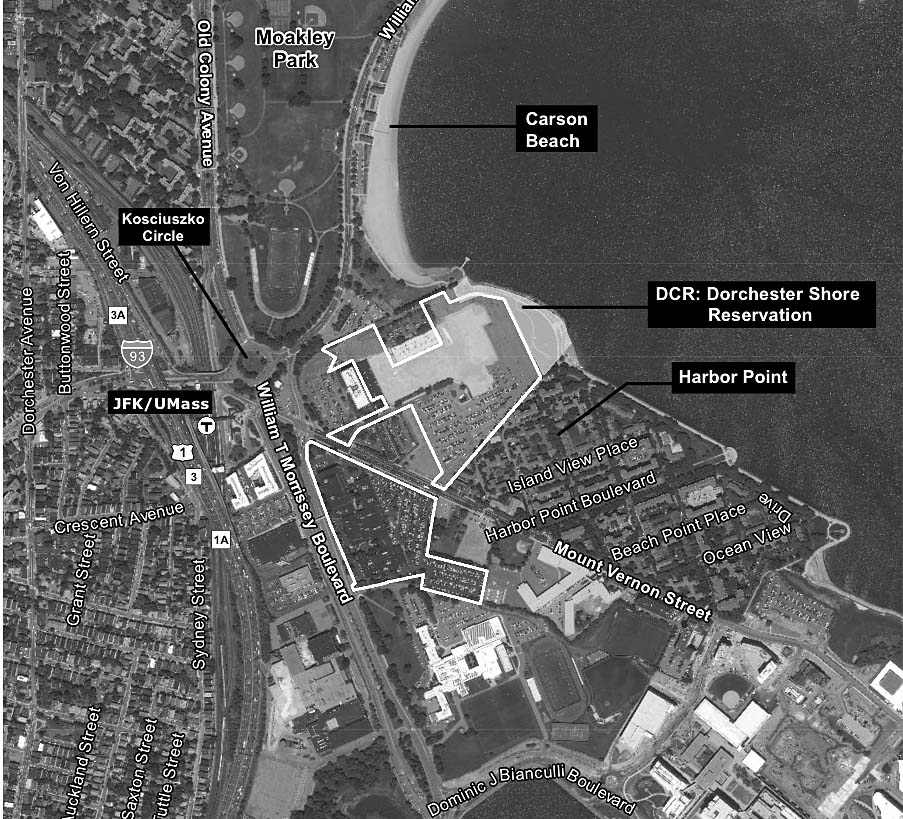 Current renderings of several proposals show the site as a cluster of high-rise buildings, which Roche expects to be more compact and less “disorienting” than similar construction patterns in South Boston’s built-up Seaport. In the end, Roche hopes the site will be home to a new form of “village” as a nod to Dorchester’s past.

“That’s how Dorchester was developed over time. If you go through the villages of Dorchester for example, there are many common threads that give each of those villages its own character...what is the vision for this? It’s not a village, not as it is now, but I think there’s got to be a better way to orient the buildings.”

For Kathy Abbott, President/CEO of Boston Harbor Now, the project all but promises to transform the surrounding areas and how they interact with the waterfront in the years to come.

“It’s obviously a huge development that has incredible potential to connect this part of the city to the harbor and to the waterfront in a way that the current configuration hasn’t really supported, so that makes it incredibly exciting,” said Abbott. “It also, in its scope and scale, has the potential to impact the surrounding transportation routes and systems, improving the circulation and connectivity and safety of Morrissey Boulevard, the circle, and the T station. And then I think the potential for this project to contribute to redevelopment of Moakley Park and surrounding public infrastructure is just phenomenal. You can really see that corner of the city being transformed.”

The project’s impact on climate resiliency will prove important for residents of the public housing structures behind Moakley Park and for stretches of Morrissey Boulevard that have been prone to flooding for years, she added.

On the potential to make Columbia Point a water transit stop, Abbott referred to a recent study Boston Harbor Now did with MassDOT and MassPORT that saw the Downtown-Quincy/Dorchester loop emerge as the second most important route out of about 30 routes in the city. The strategic location of Fallon Pier means it will likely remain a focal point of the planning process, she suggested.

An influx of housing or retail to the area could also spur BHN’s vision for a Harborwalk 2.0, which Abbott described as “a bigger and better Harborwalk that would go up in some areas and out in others, so that it’s more climate-resilient and can accomodate more people.”

Deabler, an experienced architect himself, said that “in the end, it’s just about going through that whole process.” “There are a lot of things that need to be fixed outside of their purview, and the committee will try to put as many of those concerns to bed. It’s great we’re bringing together a collection of people from diverse backgrounds to make an impact, hopefully positively, towards an outcome that the community is going to be proud of and on board with.”

For more on the project and meeting schedules, see bostonplans.com/projects/development-projects/dorchester-bay-city.