On a warm day in early September, the Humphreys Street Studios in Dorchester bustle with activity. Jemuel Stephenson stands in a room overlooking a massive workshop, next to a stack of his laser-cut bamboo boxes. Patterned with bright, psychedelic swirls, they’re deceptively simple, edges fit snugly together without nails or hinges.

“This one has a little twist and a pull right there,” Stephenson says, picking up a box and giving the lid a deft spin. “And that’s how that one opens.”

The workshop is home to a number of creatives and entrepreneurs, whose makeshift studios line the edges of the space. Stephenson says the artists often work together, sharing tools and resources. He values that collaborative environment.

“It’s huge, as far as being able to actually manufacture and actually produce and do the kind of business that we need to actually continue,” Stephenson says. 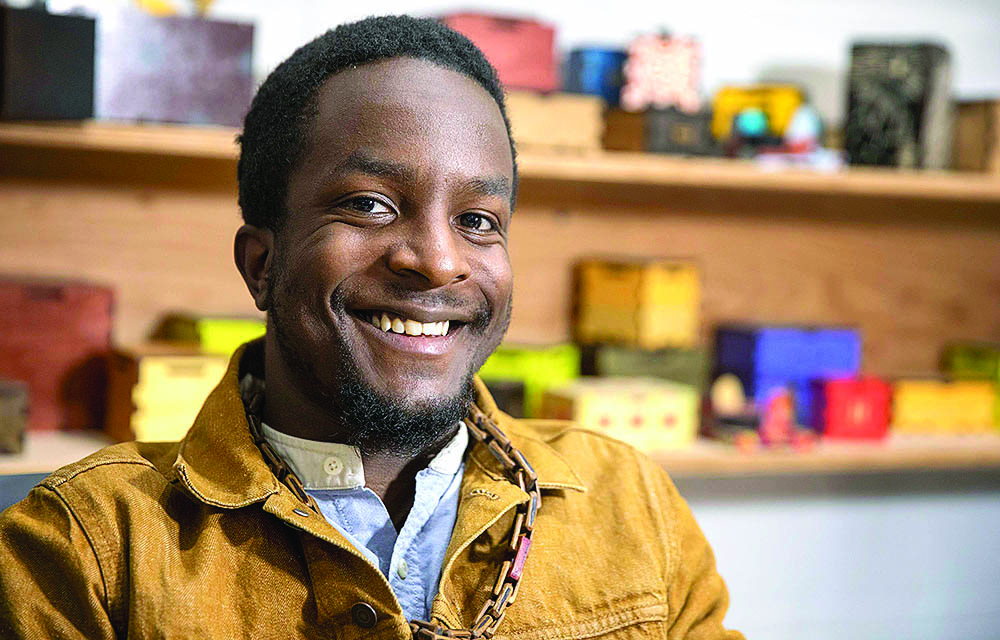 Whether they’ll be able to actually continue is a question. The studios, which are used by 35 artists, have been up for sale for about a year. The property at 11-13 Humphreys Street is prime real estate in gentrifying Uphams Corner, and the tenants fear that once it’s bought, they’ll lose their studios.

Sculptor Nora Valdez says if she has to leave Humphreys Street, she probably won’t be able to work in the city. She sculpts primarily in stone and carves on the patio behind her studio to avoid filling the interior space with dust.

“The problem is, when you find space in the city, you may have windows, but it will go to somebody’s yard,” she says. “They’re not going to be very happy.” 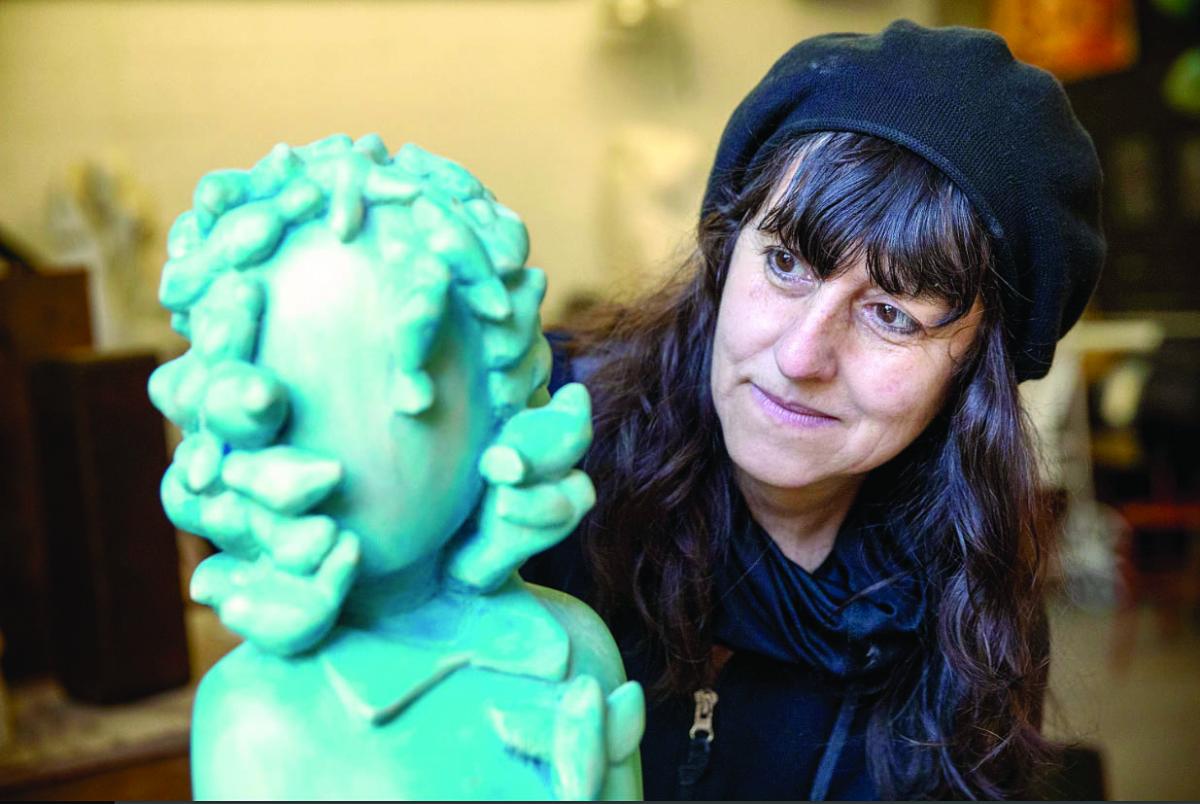 Valdez’s studio mate, the sculptor Gillian Christy, has a similar problem — it’s not easy, she says, to find studios that can accommodate the heavy industrial equipment she uses to make huge, twisty stainless-steel sculptures. The two artists pay $1,045 a month for their space, or $11 per square foot. That’s significantly less than the going rate, according to Christy. A similar-sized studio in the area would cost $500 to $700 more than what they pay now. “You can imagine moving is an increase in rent, but that’s such a substantial jump,” Christy says.

Low rents have been part of the design of the Humphreys Street Studios since they were bought in 2001 by the sculptor Joe Wheelwright and a wood carver named Neal Widett, whose handmade signs can still be found above storefronts all over the city.

“Neil and Joe’s goal was never to be empty, so they kept the rents very, very reasonable,” says James Cooper, one of the owners of the property. Cooper, along with another partner, helped Wheelwright and Widett purchase the building, an old dry-cleaning facility built in 1899. An underground oil tank that fueled the facility’s garment steamers had leaked into the soil, leaving it too toxic to allow people to live full time on the property. But the massive buildings were perfect for artists to work in.

“It was just a spectacular colony of people there,” Cooper says. “Every year they’d have an open house, and it was always packed. The artwork was unbelievable.”

Wheelwright and Widett both passed away in recent years, and Cooper and the remaining owners decided to sell the property. It was appraised at $3.1 million, an astronomical jump from the $100,000 Cooper says the partners paid 20 years ago.

But the place has been hard to sell, likely due to the soil contamination. While it sat on the market, the artist tenants organized. They’ve been in close contact with several city departments, and the Office of Arts & Culture agreed to pay for a feasibility study of the property to figure out how the studios might be preserved. 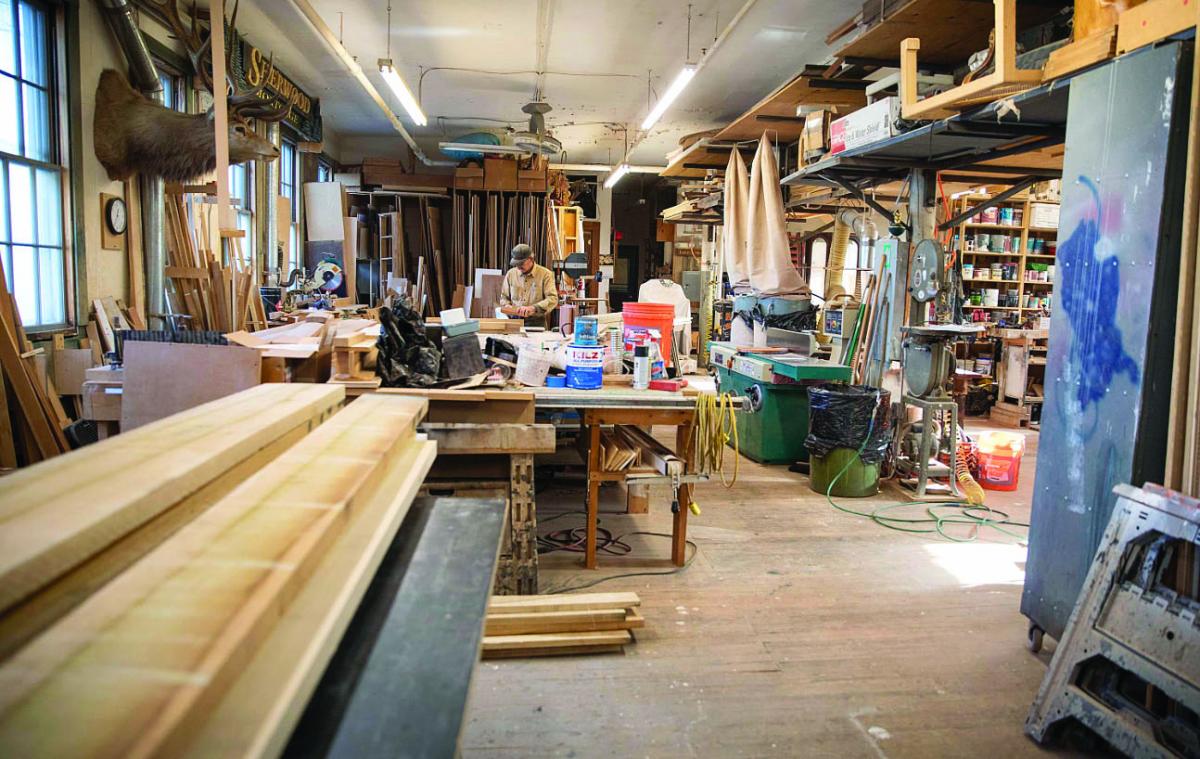 The woodwork shop at the Humphreys Street Studios.

The artists believe their best chance of survival is to find a developer who would agree to allow them to stay. Their search led them to New Atlantic, a mission-driven developer with a long track record of preserving cultural spaces in Boston, like the Midway Artist Studios in Fort Point and the Brookside Artist Studios in Jamaica Plain.

For those projects, New Atlantic was able to take advantage of subsidies for live-work artist spaces. That’s not an option at Humphreys Street, whose artists don’t live in their studios. But New Atlantic sees an opportunity in the property’s empty back lot.

“If we can develop, say, a 20- to 30-unit housing project back there, that could help subsidize the work studios,” says New Atlantic owner Bill Hardy.

With the help of another developer, Hardy hopes to buy the property, build residential units on the back lot and create a nonprofit to take ownership of the studios. The nonprofit’s board would consist of artist tenants and developer owners, a structure New Atlantic has had success with in the past. “That’s what I’m trying to figure out how to do here at Humphreys, is get ownership of the building itself into the hands of the tenants and maintain its current use,” Hardy says.

It’s strange to think that a for-profit developer may be the savior of the Humphreys Street Studios. But Hardy cautions against looking to the market to save artists. It would be better, he says, if the city subsidized commercial studios like Humphreys.

“I’ve looked at a number of buildings that we just couldn’t figure it out, and it was lost,” he says. “I would like to see a program in in the city’s economic development center or within the Office of Arts & Culture where they actually have funds to put into these properties.”

Still, New Atlantic is probably the artists’ best bet. And Hardy is determined to make it work. “Once you start to meet people, you get invested, you know?” he says.

A lot needs to go right for the project to succeed. Hardy submitted a proposal to conduct the city-funded feasibility study. He also hopes to find a way to deal with the contaminated soil. The company also needs to raise enough money to get in the ballpark of the property’s $3.5 million asking price.

In the meantime, the artists are exploring other options, like historic preservation. And they wait, and they hope.

This article was originally published on Dec. 16 by WBUR 90.9FM. WBUR and the Reporter share content through a media partnership.