Alexis de Toqueville, the French observer of American culture, traveled through the United States in the 1830s noting characteristics that made America different from Europe. He published his seminal work, “Democracy in America,” in 1835. His particular interest was the development of equality in America, the foundation of which he attributed to the Puritans who settled in New England.

One of his better-known quotations notes a characteristic of Americans that describes many of my experiences in Dorchester: “These Americans are peculiar people. If, in a local community, a citizen becomes aware of a human need that is not being met, he thereupon discusses the situation with his neighbors. Suddenly, a committee comes into existence. The committee thereupon begins to operate on behalf of the need and a new community function is established. It is like watching a miracle.”

I arrived in Dorchester as an 18-year-old who was smitten with a woman, Linda Johnson, who lived in Codman Square. Her family was a Dorchester family. Her father grew up in Fields Corner and worked with her uncles at the Baker Chocolate Factory in Lower Mills. My family was from the coal fields of northeastern Pennsylvania. But she and I had a lot in common.

It was the early 1970s, and we were both devoted to ending the Vietnam War and fighting for social justice. As Catholics, we were attracted to the work of Cesar Chavez, who was fighting for the civil rights of California immigrant farm workers.

Both of us dropped out of college to move out west and help organize the lettuce boycott that supported the farm workers. We decided to get married first, at St. Gregory’s Church, before leaving.

We returned some months later in 1973 and moved into a neighborhood near Codman Square. We picked up jobs, she at the Star Market in Lower Mills and I as a spray painter in a factory in Waltham. The Codman Square area was undergoing a dramatic transformation at the time that was both racial and economic. Sapped by suburban growth at the expense of urban neighborhoods, unsettled by racial change as African Americans moved into segregated neighborhoods in red-lined western Dorchester, and destabilized by economic turmoil as Massachusetts was changing from an industrial commonwealth to a service-oriented state, Codman Square was in a state of collapse.

As Boston’s population continued its nosedive (since 1950, the city had lost 30 percent of its population), the value of housing was dropping like a stone. 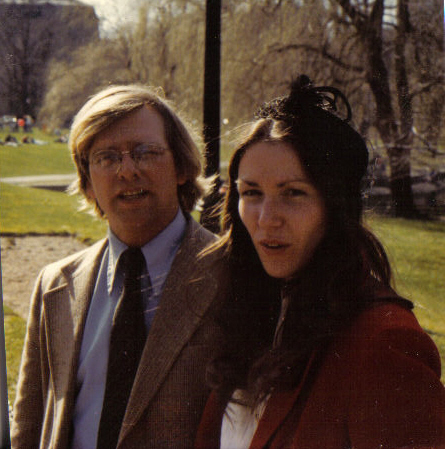 Bill and Linda (Johnson) Walczak back in the day.

I remember people asking me if I had $5,000-$10,000 available to purchase a home in the neighborhood. Many vacant houses burned down for lack of buyers, some of them for insurance money, others because they were vacant after being stripped by thieves of their copper plumbing. There were, literally, hundreds of house fires in the mid 1970s, resulting in hundreds of vacant lots. A few streets had more vacant lots than houses.

When busing for desegregation of the schools started in the fall of 1974, racial turmoil erupted in the Codman Square area. Some black families who had moved east of Washington Street were firebombed out. Groups of teens clashed, with some of the turmoil resulting in violence, including murder. The Codman Square business district declined quickly, given that it was seen as an emerging racial war zone.
Although thousands of mainly white residents moved out, many remaining whites joined with black residents in an effort to stop the decline. At least six different neighborhood associations sprung up around Codman Square. A majority of them were either mostly white or mostly black, but the leaders of the groups knew one another, and cooperated around shared goals.

In 1974, City Hall announced that a new library would be built in the Square, and the old library (now the Great Hall) would be abandoned. The building was in terrible shape due to lack of maintenance. It was built in a very stylish Georgian Revival style in 1903 to replace the Dorchester Town Hall that had been made unnecessary after the town’s annexation by Boston in 1870. It had retained its architectural beauty even as it was falling apart. At a fall 1974 meeting of the Codman Square Civic Association, the issue of what to do about the old library building was a major part of the agenda.

Neighborhood people genuinely believed that the building would burn down if the library moved out, as most abandoned buildings had burned, including the Lithgow Building across Washington Street (now Codman Academy’s elementary school and a Bank of America branch), which had had three major fires in the previous few years and showed trees growing through its roof.

Those at the meeting looked for ideas about what kind of businesses might want to come into Codman Square, and quickly noted that businesses were leaving, not coming. Someone mentioned that Bowdoin Street had recently gotten a neighborhood health center to locate in that business district and the discussion turned toward that possibility. Most people at the meeting (including me) did not know what a health center was, so a panel discussion on the topic was scheduled for the association’s December meeting.

The panel included Ethel Lenox, a founder of the Uphams Corner Health Center, Jean Hunt, a founder of Neponset Health Center, Pat Edraos, a founder of the Bowdoin Street Health Center, and Sr. Kathleen Natwin, head of Ambulatory Care at the Carney Hospital, which supported the development of a number of health centers. They spoke for a few minutes about how their centers started, the health needs they addressed, and how they had made a difference in their communities. Such a facility seemed to those in attendance an attractive option for the old building.

In classic de Toqueville fashion, a committee was created to look into establishing one. I was chosen to be the chair after asking many questions during the panel discussion.

A 20-year-old newcomer from out of state with a funny accent and long hair, I certainly was an odd choice. And though employed as a working-class spray painter, I was seen as a radical. In fact, I was once accused of being a “communist” for suggesting that the civic association occupy abandoned houses and look for families to move into them. I realized years later that naming me chairman was something that the association leadership figured would keep me occupied and less likely to irritate other members with, to quote one member, “Walczak’s crazy ideas.”

The Codman Square Health Committee comprised representatives of six community groups from both sides of Washington Street, and incorporated in April 1975 as Codman Square Health Center, Inc. The group investigated the need, and found it enormous. Though there were 10 practicing physicians in the square at the time, all but one had closed their practices to new patients. Primary care was generally gotten via the emergency room of the Carney or Boston City Hospital.

It wasn’t an easy road to the opening of the health center, however. For still unknown reasons, the Kevin White administration in City Hall opposed allowing the facility to use the nearly abandoned library building. City officials put roadblocks in front of the planning effort for several years.

The frustration level of the board of directors boiled over in April 1978, when we called a press conference to condemn the White administration for failing to allow a community group to use a largely abandoned city building to provide desperately needed health care services to a community without access to primary care.

Charlie O’Hara spray painted a sign that said “Codman Square Health Center” and some children held it up on the front stairs of the library building (it now hangs in the Great Hall). Because we held the press conference on a Saturday, we got decent media coverage.

What we didn’t know at the time was that the White team was planning its 1979 election campaign, which was looking like a close match between Joe Timilty and White, who had beaten Timilty by only 4 percent in 1975. Having a community group with a good story and White as its bete noire wouldn’t look good to the electorate.

A couple of days after the press conference, White asked to meet with us in the Eagle Room at City Hall. He listened as we explained what we were trying to do, then asked, “But what do you want from me?”

I said, “We don’t want anything from you, we just want to use a largely abandoned city building,” but failed to understand that White was actually channeling King Louis XIV’s view of himself, “L’etat, c’est moi.” He was the city.

He answered that not only could we have the space, he would provide money to create health care space in the basement of the building. What he didn’t say was that the dedication of that space would be done at a campaign stop three days before the election.

At the dedication, a Codman board member was holding a sign that said, “Better late than never” when a White aide wrestled it from the member’s hands and tore it up just before the mayor arrived. At the ceremony, I quoted the statement from de Toqueville that launched this story and added the phrase that completed the statement after “miracle” – “because these citizens perform this act without a single reference to any bureaucracy, or any official agency.”

It was meant as a snide remark, and, unfortunately, it was taken as one. White won the election and the health center received no additional help from the city, except for one grant that required additional community efforts to achieve. But that’s a story for another day.

The members of the Codman Square Health Committee had no idea that it would take almost five years to achieve their goal. Even then, most said that the new Codman Square Health Center would not survive. But this small group of citizen volunteers built a facility that, situated on more than 100,000 square feet of space, today has several hundred employees, a budget of nearly $39 million, over 22,000 patients, and more than 114,000 visits per year.

It has helped create two schools (the Edward Kennedy Health Careers Academy and Codman Academy), the HealthWorks Fitness Center, Daily Table, Latin Academy Housing, and much more. And it has enhanced the idea of a health center as a hub for community change.

Alexis de Toqueville would be impressed.