A rendering of a proposed apartment complex that would be built at 780 Morrissey Blvd. Image courtesy C3 Architects

Development plans to transform a landmark Morrissey Boulevard dining and function facility that shut its doors in 2017 into a 206-unit apartment complex with a roof deck, dog spa, and 136 parking spaces received an extensive airing – and forceful pushback about flooding, access to the sea, traffic, and displacement from some of the 30 or so neighbors who participated in a virtual meeting hosted by the Boston Planning and Development Agency (BPDA) last Tuesday.

The acre-and-a-half site at 780 Morrissey Boulevard, once home to the popular Phillips Old Colony House and Freeport Tavern, is now being used by a neighboring car dealership as a storage area for its vehicles. The parcel is owned by Phillips Family Properties, which also controls Boston Bowl, Phillips Candy House, Ramada Inn, and Comfort Inn among its Dorchester holdings.

Phillips Family Properties partnered with national developers at the Michaels Organization and Cube 3 Studio Architects to commission the project.  Jay Russo, vice president of development at Michaels, said the team amended its original proposal — first outlined in community meetings last year—to address some of the concerns raised by critics.

As now planned, the complex would include two segmented residential buildings – one four stories tall and the other five – connected by a glass corridor and built over ground-level garages of 130 parking spaces with 6 additional spaces available outside.

The proposal also outlines plans for a roof deck, a leasing office, dog spa, and bike storage areas inside the building, as well as a designated short-term shuttle and drop-off area accessible from Freeport Street, an outdoor dog park, and patios.

“After 27 years the Phillips Old Colony House and Tavern is ready for a new chapter,” said Phillip Strazzula, a partner at Phillips Family Properties. “We commissioned several studies and they all pointed toward a residential development.”

Added John Harding, a senior associate principal at Cube 3: “We’re trying to develop a piece of property that once had a big piece of community engagement. We’re trying to bring that back.”

He said that the team created two distinct buildings and scaled down the size length-wise to “get rid of that feeling of the wall” and create “transparency from the Morrissey side to the I-93 side,” by linking the two buildings through a glass corridor.

“What we have now is a much better and more appropriately scaled building that we think is the right mix for this project for this location,” he said. The team hopes to create “a nice pedestrian and bike-friendly environment,” he added, by updating the sidewalks on the Freeport Street side and the side facing I-93.

Developers have focused on the idea that the project could enhance a still incomplete and still unfunded plan to create a multi-use path that would begin at Malibu Beach and end at Conley Street, providing a connection through Victory Road and Tenean Street.

“We’re favoring a bike-centric design to interact with what would be this future trail that’s between the highway and our project. It’s not part of our project, but it’s a community benefit that we want to encourage and support” said Harding.

The team has received Massachusetts Environmental Policy Act (MEPA) approval and has entered into the Chapter 91 compliance process, which assesses public access to the coast. To that effect, said Harding, “We’ve accommodated Boston’s resiliency planning for anticipated sea level rise by building up the ground floor elevation.”

Charles Cook, a longtime Dorchester resident and former city employee, told attendees, “I want to voice my support of the project. I lived in Dorchester as a lifelong resident for 70 years, up until about a year ago,” he said. “I supervised and did inspections as a city employee in the Inspectional Services Department. They’d [The Phillips Group] always come in compliance with anything we needed and do what we asked. I can’t say enough of the family and the group.” 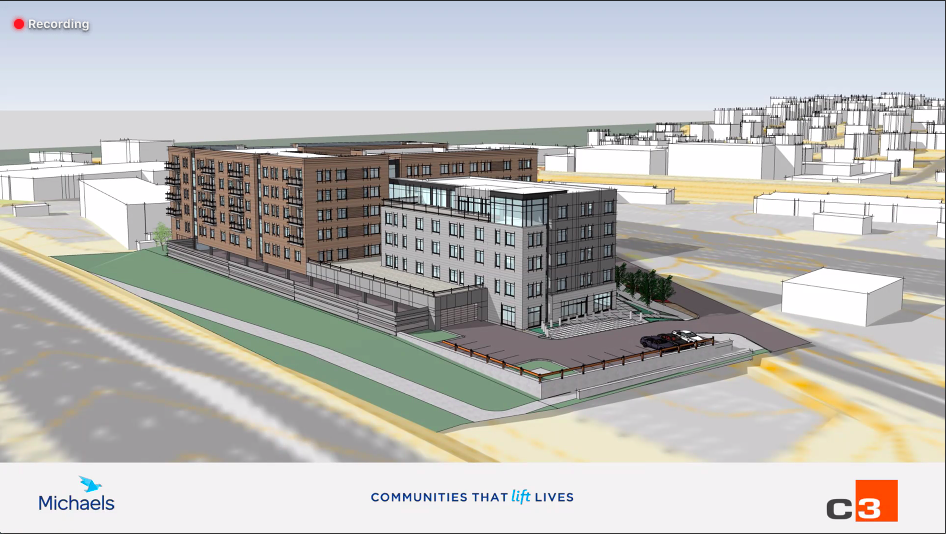 A rendering of the proposed new buildings at 780 Morrissey Blvd., currently the site of the Old Colony House/Freeport Tavern, which closed in 2017. C3 Architects image

But others mainly spoke up to oppose the project in its current form.

Maria Lyons, a resident of nearby Port Norfolk, said she was concerned with potential flooding from rising sea levels, the height of the proposal, and a lack of comprehensive neighborhood planning.

“I have concerns that the area is a flood zone that was significantly flooded in the storms we had a few years ago,” she said. “Climate Ready Boston hasn’t finished [its] report, Boston Water and Sewer hasn’t done their study yet, so I’m concerned about any kind of building in the area,” she said.

“I understand that the building is being built with all of the specifications for flooding,” she said, “but I’m concerned about the water around the building— where will it go? It could be in the future that they say, ‘we should have built retention ponds’ and now we have buildings.”

She also noted that the building’s height, although scaled back, would still effectively create a barrier to the waterfront. “This is going to now be a wall,” she said. “You’re creating a wall between Dorchester and the ocean and this is going to set a bad precedent. That’s going backwards in terms of environmental justice.”

Grady Eason, a Dorchester resident, said he believes that the project is “out of place. I don’t see anything in there about how you’re going to address the traffic. This blocks our view and it just seems like they’re forcing big business in the area. I just don’t feel like it’s in the best interest of Dorchester.”

He added that he would’ve liked to have seen a project that was “low” and “out of the way,” with units that would be more accommodating for families.  “From the beginning we’ve heard about traffic, and it was very important for us to make sure that we had access to the shuttle, “he said. Speaking in response for the development team, Russo said, “I think that is, although not perfect, going to be used. We’ve also provided parking. Overall I’m confident that we have adequately addressed the parking needs for the residents.”

One person, Russell Weiss, took issue with how the BPDA’s project manager Stephen Harvey conducted the meeting, accusing him of making a case for the developers instead of acting as an impartial facilitator.

Harvey had replied to Eason’s concern over the lack of family-oriented units, saying that “with the addition of more single units, especially in new developments, this would lessen the burden on [three]-deckers and family-aimed housing so that we can keep family units from being split up into single units, which is often happening in some neighborhoods.”

Rebutted Weiss: “You’ve given counter arguments to each person who has expressed concerns about the project and it sounds to me in this meeting as though you are making a case for this project when, as a BPDA person, you should be facilitating a discussion about this project in a neutral manner and I don’t think you’re doing that.”

Said Harvey, “I’m sorry you feel that way. I don’t lean to one side or the other; my job is just to carry us through the process and clarify information.”

Weiss said he opposed the project because he thought it would add to the displacement of residents. “The idea that you’re trying to come into this neighborhood and build a building that’s not for people now, but for this demographic that you’ll bring in from elsewhere. That’s not the Dorchester that I believe in,” he said.

Raheem Shepard, a Dorchester resident and business representative for the Carpenters union, asked the proponents to commit to using union contractors.

“If this project was to be built, I would want it to be built with responsible union contractors. I’m looking for a commitment that you will use union workers on this project,” he said.

Russo replied, saying, “Not at this time. But we’ve worked with the Carpenters Union on another project and I will always consider using union wherever possible. But we don’t even know what we’re building just yet. We will definitely pick a contractor that has relationships with the Carpenters union. We’ve done that before. I plan on letting every union bid this job.”

Sharon Cho, a Dorchester resident, said she heard many of the same concerns that were raised by residents in the last meeting, especially over affordability and displacement. She asked the team if they would consider including more affordable units than are required.

Said Russo, “As I sit here today I can’t commit to adding more affordable units until we get further along. We’ll take a look at what we can do here, whether it’s deeper subsidies or more units, through this process and with the IAG (Impact Advisory Group) and work on that issue.”

A breakdown of the 206 rental units in the proposal includes 46 percent studios; 43 percent one-bedrooms, and 11 percent two-bedrooms. A total of 27 units would be reserved as affordable in compliance with the city’s Inclusionary Development Policy (IDP.)

The policy requires proponents of market-rate development projects with 10 or more units to reserve a portion, generally 13 percent of units, for income-restricted residents. To comply with IDP, developers can also create income-restricted units in a separate location near their building, or pay into the city’s IDP fund, which are used by the city’s Department of Neighborhood Development (DND) to finance affordable housing projects in Boston.

The Boston Civic Design Commission (BCDC) will now review the proposal, and the developers will also participate in several more community input sessions and IAG meetings under the BPDA’s review process.

“Right now, with the Covid situation, we are taking it day by day. This team has been very patient in terms of having to wait this all out,” said Harvey. “We still have quite a way to go and we will make sure to inform you of the process as it goes forward.”