The faces and names of more than 100 victims of police violence from across the country are the focus of a new mural in Fields Corner. Daniel Sheehan photo

A new mural in Fields Corner bearing the names and faces of more than 100 individuals said to be victims of police violence across the country serves as a temporary memorial while promoting justice and declaring “Black Lives Matter” in large bold lettering.

The bright, colorful artwork that has caught the eye of passersby on Dorchester Ave. adorns three sides of the building that once housed the John Gallagher Insurance Agency and is now operated as a mixed-use space and community fridge by Fields Corner Main Street.

The artist, Savin Hill resident Jorge Morfin, told the Reporter that he conceived of the memorial earlier this summer in the wake of several high-profile killings as a way to “ensure that the victims aren’t forgotten.”

He added: “It was around the time the George Floyd video had come out, and everybody was hitting the pavement and protesting. I’m not a protestor. I like to speak through my work. I’m not somebody to go out there and march and scream. But when I saw the Floyd video, I broke down and realized I had to do something.”

As an alternative to full-voiced protest, Morfin wanted the memorial to be in a “serene” place of reverence and quiet reflection. He found an ideal spot outside of the Black-owned Ripple Cafe in Ashmont, where, drawing on his background in floral design, he constructed a memorial “garden” of sorts by mounting on dowels the names and faces of victims like Floyd, Ahmaud Arbery, Sandra Bland, and dozens more. 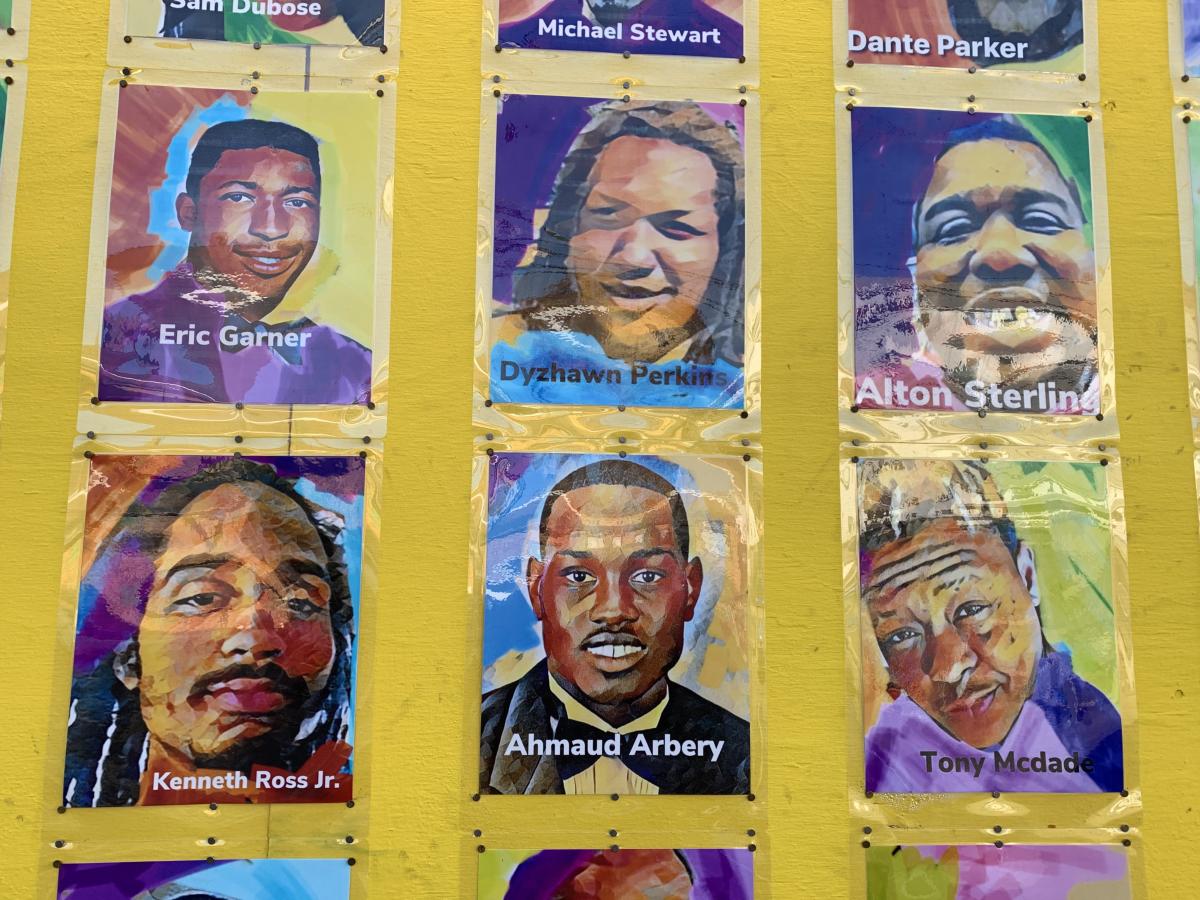 “I thought the city would take it down within one or two days,” said Morfin. “But it really made an impact with people. I witnessed one woman break down and start crying as she was reading the names.”

Then, sparking what Morfin called a “Ripple effect,” another observer suggested that he share the memorial with other parts of the city as a traveling art installation. He reached out to the owner of the Fields Corner property, local developer Travis Lee, who said he was fully on board with the idea. A partnership between Morfin, Lee, and Fields Corner Main Street took form, setting the wheels in motion for the project. 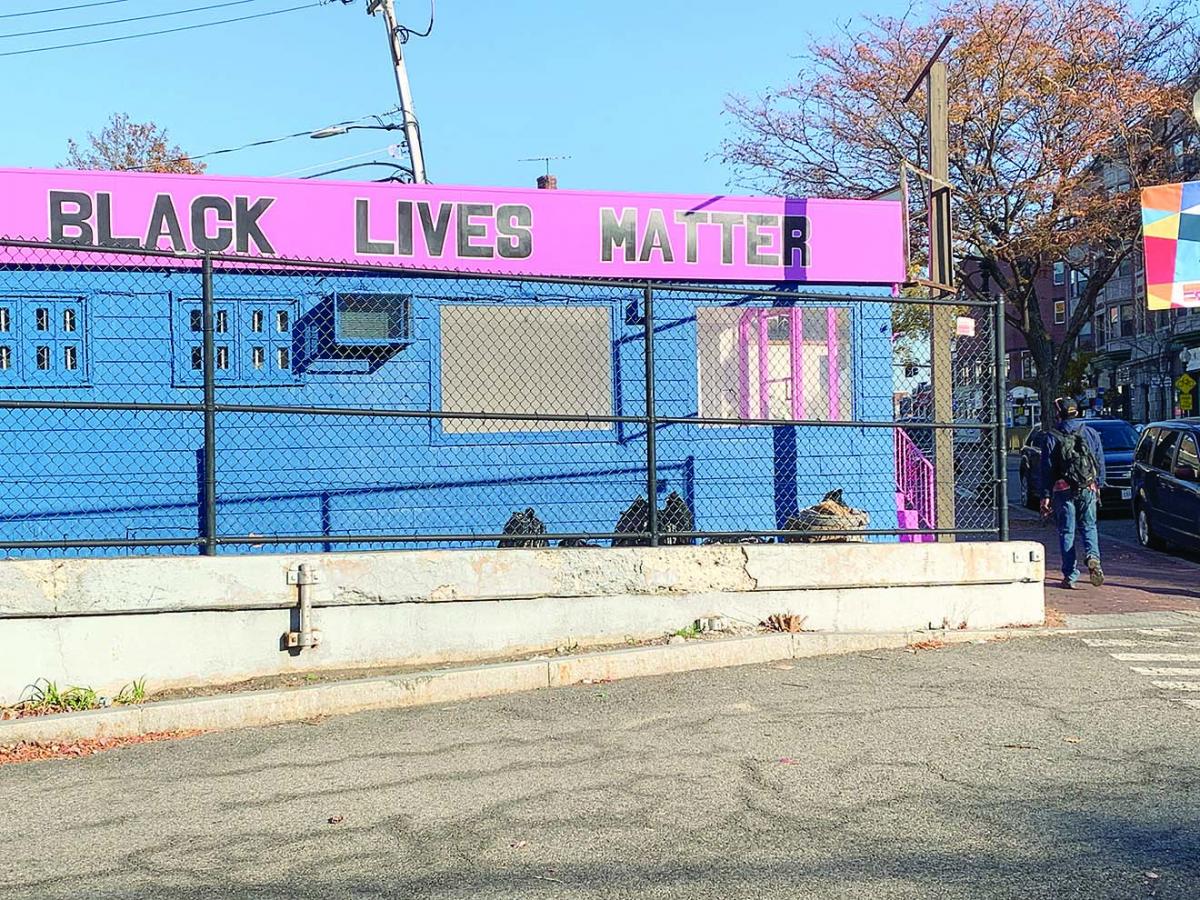 Morfin finished the mural on Monday, but noted that as he was working on it during the last few weeks, the unfinished product drew emotional reactions from community members.

“People were driving by honking their horns, shouting thank you, and I even had some people coming up and sharing their lives with us and what it meant to them, telling us about victims they remember. It was pretty special,” he said.

The vibrant colors used in each portrait—as well as the bright pink that highlights the Black Lives Matter lettering— make the mural hard to miss. Morfin hopes to attract young people to the exhibit and create space for conversations with their families.

The bright hues are also meant to imbue the victims themselves with love and life. In combing through each victim’s story for the project, Morfin noticed that some were portrayed to the public in unflattering or misrepresentative ways.

“While researching, I discovered a lot of these victims had one single photo that people saw, and at times it was a mugshot, and others were just bad photos,” he said. “I wanted this to be a celebration of them and of their lives...I digitally colored all the photos and erased the background, so in a sense humanizing them a bit more, and taking away any sort of stigma.”

And while some of the higher profile victims of police violence are likely to be known nationally, Morfin is hopeful that pedestrians studying the wall will see names they don’t recognize and learn more about the stories and lives of those people. 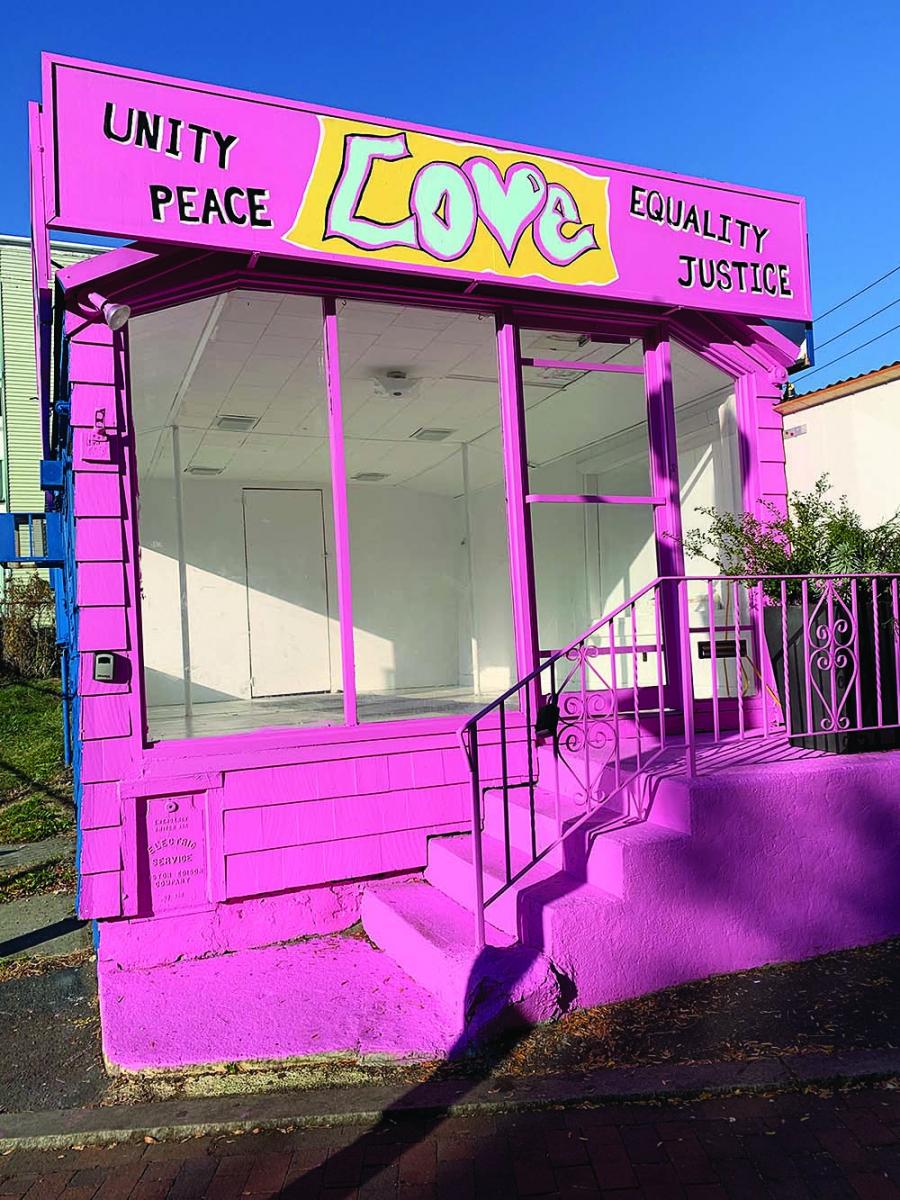 In the coming weeks, Morfin plans to reinstall the exhibit in Ashmont, where it was on display for only a week this summer. The Fields Corner mural is on borrowed time, as the property is expected to be razed to make way for an income-restricted apartment building sometime next year.

But the mural, and its message, will survive by changing locations yet again at the end of the year, potentially moving to somewhere in Roxbury.

“I hope it touches the community of color the most,” he said. “I wanted to ensure it was speaking directly to that community, so that people walking by felt that, you know, this was done for me. So far people have been really responsive...it’s amazing to have an idea and then see it have true impact.”