Bert Bremer and Karen Fegley, homeowners on Grampian Way, hold a panel of the Tesla V3 solar roof that is being installed at their home this week. Katie Trojano photo

A Dorchester couple looking for ways to be more energy efficient is having a Tesla V3 solar roof installed on their three-story home on Grampian Way. This installation of the latest solar roofing model, now in the final stages, will be the first in the state and the second on the East Coast, according to homeowners Bert Bremer and Karen Fegley, who had been on the list to get the new device for three years.

“Since then, Tesla has come up with this new version that’s better and less expensive. The installation was originally supposed to happen in early April, but due to the pandemic it got put off until now,” said Bremer.

The panels are made up of sleek black tiles with thousands of cells that absorb sunlight. Once they are installed, the homeowners will be able to manage their solar system and home energy consumption on Tesla’s mobile app by watching consumption rates rise and fall in real time, including historical usage. 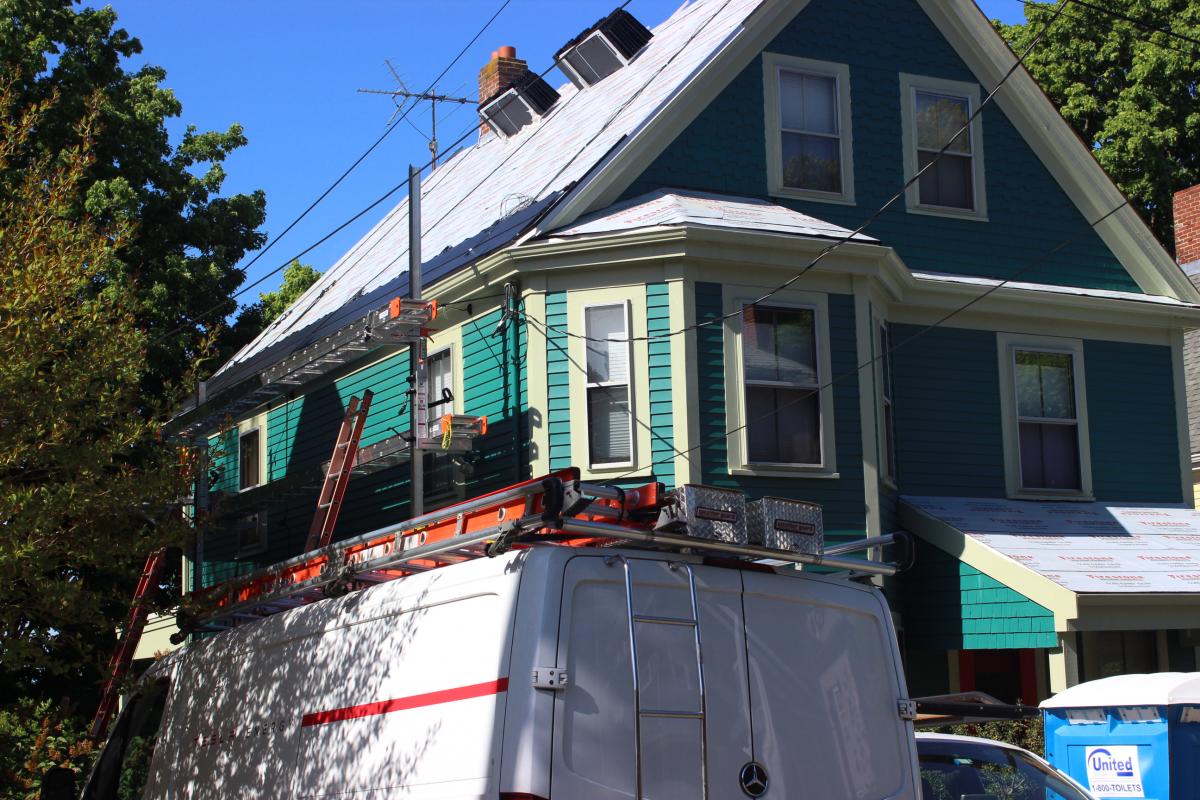 “We decided on this option in part because we needed a new roof anyway. We’ve lived here since the ’70s and the existing roof went on in 1991. So, we thought it was time, and this system made the most sense,” Bremer said.

The couple have made personal adjustments to “live as lightly on the planet” as possible — switching to vegetarian diets and looking for other ways to support environmental sustainability.

“We’re always looking for ways to get more efficient and use less,” said Bremer, “I don’t know if this is the thing that’s going to save the world, but it’s a good step.”

“The problem with traditional solar is that aesthetically, it doesn’t look great. We take the existing roof off of the house down to the decking, get it water-tight, and start to put the panels on and bind them together,and that’s pretty much it,” he said.

“You get a much better warranty with this than you would with traditional roofing plus the cost is significantly closer to a new roof with new solar. So, if you’re in the market for a new roof and solar, it’s kind of a no-brainer,” said Coehlo.

“It’s a pretty durable material and it’s very impressive. There’s no point in putting a beautiful shingled roof on your house and covering it with traditional solar panels. With this option, you’re creating your own solar electricity with a battery that will charge via solar and would power the house during a power outage.”

The team used what Coehlo called a “lader-vator,” which he said is standard in the roofing industry, to lift the Tesla V3 solar panels up onto the roof.