Dorchester Potteryworks is one of our community’s historical treasures. Founded in 1895 by a Connecticut man, George Henderson, and operated by him and his family, the company produced earthenware pottery for eight decades until it closed in 1979.

The business was located on Victory Road, near the edge of what in the late 1800s was the Dorchester waterfront and is now Morrissey Boulevard.
Henderson learned the pottery business in New Haven before moving to Dorchester, where he built his home and bought an industrial building across from the Mill Street residential neighborhood.

Before and just after the turn of the 20th century, the Henderson family produced plain and utilitarian products, largely for farm use – feeders for chickens, storage jars, acid pots, and dipping baskets. The company also sold a popular product known as “Henderson’s Foot Warmer,” a porcelain pig that could be filled with hot water and placed at the foot of a bed.

In 1914, Henderson expanded the business and built a huge “beehive kiln” – 20 feet in diameter – and for the next half century it helped to produce many thousands of pieces of stoneware pottery, adding such household items as beanpots, everyday plates, and casserole dishes. It is the only building that still stands on the site.

The potteryworks was situated adjacent to the Old Colony Railroad’s tracks from which boxcars of firewood were delivered to furnish the fuel to fire the furnace. Once the pottery was formed by hand, it was placed on rows of brick shelves inside the kiln, which when sealed produced temperatures reaching up to 3,000 degrees Fahrenheit.

The pottery would “cook” for some days, and then cool down for many more days afterwards. There was always the fear that if cooler air broke into the sealed super-heated kiln, every piece of pottery inside would crack.

When the furnace was cooking, huge clouds of black smoke would fill the neighborhood for days around Clam Point and Pope’s Hill. In the mid-1960s, new environmental laws caused the shutdown of the wood-fired kiln and the family added new gas-fired and electric-fired kilns. But they soon found that the lower heat generated in them changed the texture of their product. 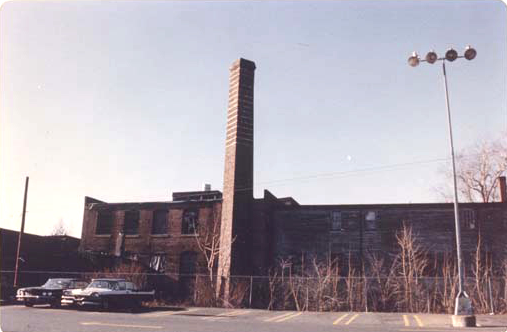 The Potteryworks building on Victory Road as seen in the 1960s. Photo courtesy Dorchester Historical Society.

While the early products were intended for very basic and unadorned utilitarian uses, in the 1940s, the company brought in decorators who developed a distinctive design to the work. Much of the pottery was produced in a distinctive blue motif, and attracted by the designs, buyers soon opened a new market for the potteryworks.

It was in 1963, when I was visiting the home of a college friend’s parents, that I first heard about Dorchester Pottery. When they learned I was from Dorchester, they excitedly told me that each time they came to Boston they would visit the potteryworks and return home with many pieces – coffee mugs, plates, bowls, and other collectibles. They proudly showed me their full eight-piece dinner set – plates, cup & saucer, sugar & creamer, all in the distinctive “Blueberry” pattern. 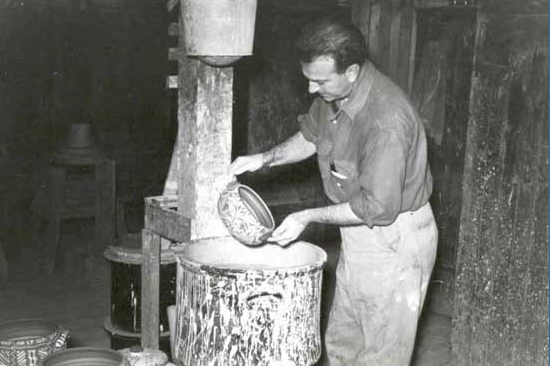 Later, back home in Dot, I found my way to the Victory Road factory and bought four large coffee mugs – for $4 each.

After the large wood-burning kiln was replaced by the smaller, gas/electric units, the company reduced its hours and placed limits on sales. By the late 1960s, the retail shop was opened just one day a week and purchases were limited to two pieces per customer.

Interest in Dorchester Pottery surged after the business shut down, and several community activists sought to establish a museum at the industrial site.

In 1980, a fire destroyed the original Henderson residence and most of the industrial buildings nearby; only the brick beehive kiln structure survives today. It was added to the National Register of Historic Places in 1985, and in 2001, the property was acquired by Bay Cove Human Services, which still uses the building to this day.

Material from the Dorchester Historical Society archives was used in preparing this report.