The scene today next to JFK-UMass station where a state-owned stairway was removed over the weekend. Gintautas Dumcius photo

State workers over the weekend demolished rusted stairs which were located near the JFK/UMass MBTA station and the focus of a death investigation.

David K. Jones, a Boston University professor, fell to his death from the stairs on Saturday, Sept. 11. Jones, a 40-year-old Milton resident who was an associate professor in BU’s School of Public Health, was out for a run and somehow accessed the stairs, and fell from 20 feet.

According to the State Police, the stairs had been closed for 20 months after they were deemed unsafe. 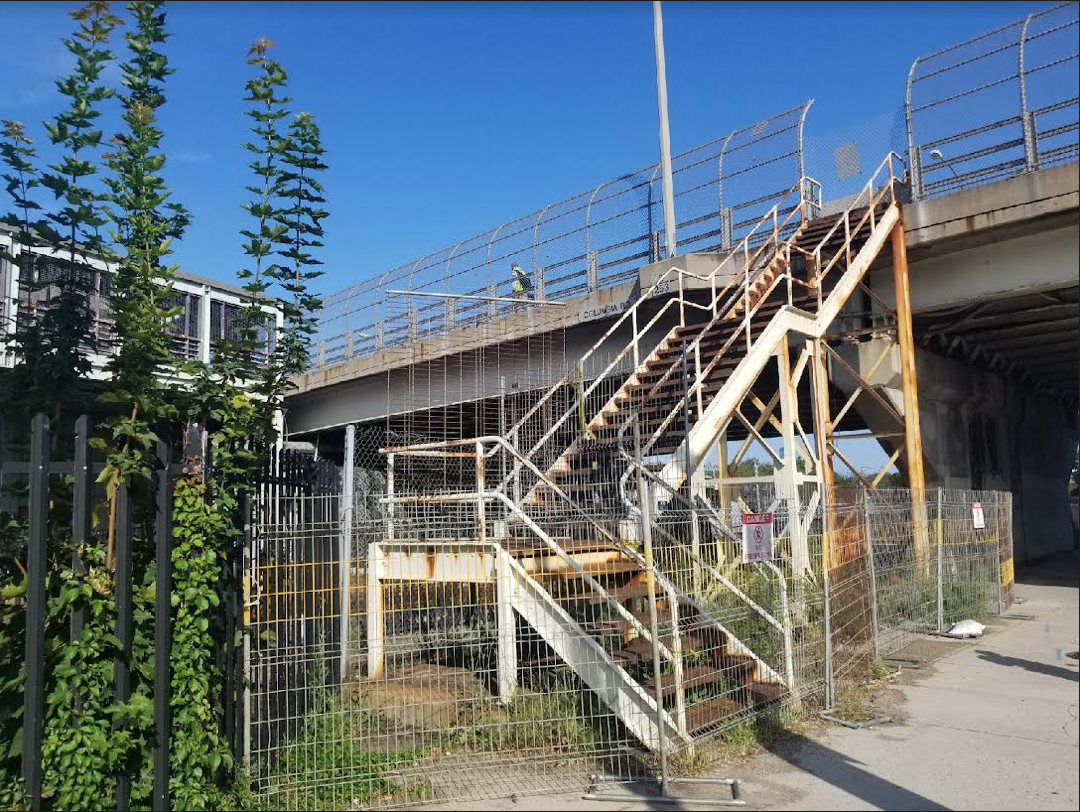 Above, the stairway in question as seen last Monday, Sept. 13 before its demolition. Gintautas Dumcius photo

On Monday morning, a spokesperson for the Massachusetts Department of Transportation said agency crews demolished the stairway, with the work starting Saturday night and ending Sunday morning. Black fencing had replaced the silver wire fencing that had previously in place.

On Sunday, family and friends of Jones gathered for a wake at the Alfred D. Thomas Funeral Home in Milton. The Boston University School of Public Health is planning a memorial service, both virtual and in-person, from 3 p.m. to 5 p.m. on Thursday, Sept. 23.

A Utah native who was raised in New York’s Washington Heights, Jones was remembered as a “devoted husband and father of three children, a beloved teacher and a writer who dedicated his work to health justice,” according to his obituary.

Gov. Charlie Baker spoke to reporters about the stairs after an unrelated meeting with top state lawmakers this week. “We felt it was important to take them down,” Baker said, according to the Boston Globe.

Annissa Essaibi George, a city councillor at-large and candidate for mayor who lives not far from where the tragedy occurred, said the fatality brings to mind the continued disrepair of infrastructure, whether it’s state-owned or city-owned.

“This was a huge safety issue,” she said. “We have to make sure at the city level that we are reviewing all of our public
spaces and when they’re not safe, we need to move quickly. My heart breaks for the family, for their loss.”

City Councillor at- Large Michelle Wu, who is also running for mayor, said she was “devastated” by Jones’s death and extended her condolences to his family.

“This terrible incident shows that failure to invest in our public infrastructure can have tragic consequences,” she said.

“I will be following the investigations closely to determine what happened and work to ensure it never happens again.”

While the stairs were close to the JFK/UMass MBTA station, they did not belong to the transit agency. But the stairs that directly lead up to the station, from the busway, are also rusting and appear to be shored up with lumber. Similarly, the stairs leading up to the platform at the Fields Corner station, just two stops away, are also in rough shape, with cracks appearing in the stone and evidence of efforts to add mortar and bind the steps. That station was completely renovated more than ten years ago.

The MBTA spends roughly $31 million a year on maintenance and upkeep of its facilities.

“Regular maintenance is a central component of the MBTA’s asset management program and includes inspections, preventative maintenance, and corrective maintenance of our vehicles and infrastructure,” MBTA spokesman Joe
Pesaturo said in an emailed statement after the Reporter asked about the state of the stairs.

The transit agency has a reliability engineering group that regularly inspects MBTA properties, with help from third-party
engineering firms that identify safety concerns.

“All MBTA stairs are routinely inspected by the MBTA and reviewed by third party engineering firms,” Pesaturo added. “Patch repair work has been performed from time to time, and the steel treads have been deemed stable in recent inspections.”

In an interview on Sept. 2, before Jones’s death, MBTA General Manager Steve Poftak acknowledged the state
of the Fields Corner steps. The combination of stone and metal, along with the vibration of the train station, isn’t
working well, he said. “Right now, we’re in Band-aid mode in terms of fixing it.”

MBTA officials are trying to find another design that is “more durable,” he added.

“When I took this job, I didn’t realize how much time I’d spend on stairwells,” said Poftak, who assumed the GM post on a permanent basis in 2018. “They’re an issue at a bunch of different places throughout the system.”

This story was updated on Wednesday, Sept. 22, with additional reporting.