Genaro “Gio” Ortega with his dog, Turtle, in front of his portrait of Boston’s Ruth Batson, a life-long champion of school desegregation in Boston and across the United States, on the Grove Hall mural.
Seth Daniel photo

For decades, visitors entering Grove Hall from Roxbury by foot, car, or bus were greeted by a derelict brick wall and an overgrown empty lot next to the neighborhood’s busy Post Office and business district. It was hardly the first impression that community members were looking for.

Today, thanks to a grass-roots effort of volunteers and artists, those coming into Grove Hall are greeted with a new mural whose portraits convey the strength and character of Boston’s great Black leaders throughout history. Gone are the brambles and broken bricks; in their place are images of Malcolm X, Ella Collins, Melnea Cass, Frederick Douglass, the escaped slave whose activism was key to the abolitionist movement in Massachusetts and New York – he gave multiple speeches in Boston, and a square is named in his honor in Roxbury – and many others.

“I like doing portrait work and I was ready to get on this,” said Ricardo “Deme5” Gomez, a Four Corners native who also worked on the acclaimed “Roxbury Love” mural. “I was really inspired to paint Frederick Douglass…I was inspired to learn about his dedication to learning and teaching his people. In the end, his goal was to reach the minds of the masses. Paintings like these teach us about the amazing people central to this city. I’m not a scholar but I can understand how important all of these people were to the city we’re in today and that’s what I tried to reflect in my work.”

While the mural has been in place since September, the artists – particularly Thomas “Kwest” Burns and organizer Jamarhl Crawford – felt it appropriate to highlight the mural in a big way in honor of Black History Month 2022.

“Kwest was the first to put out the SOS to all of the artists,” said Crawford. “He told everyone it was poppin’ and that we have this opportunity now. It all just came together. This is completely grassroots; there wasn’t any funding or any budget, but people coming together. Cats did the work first and other folks pitched in.” 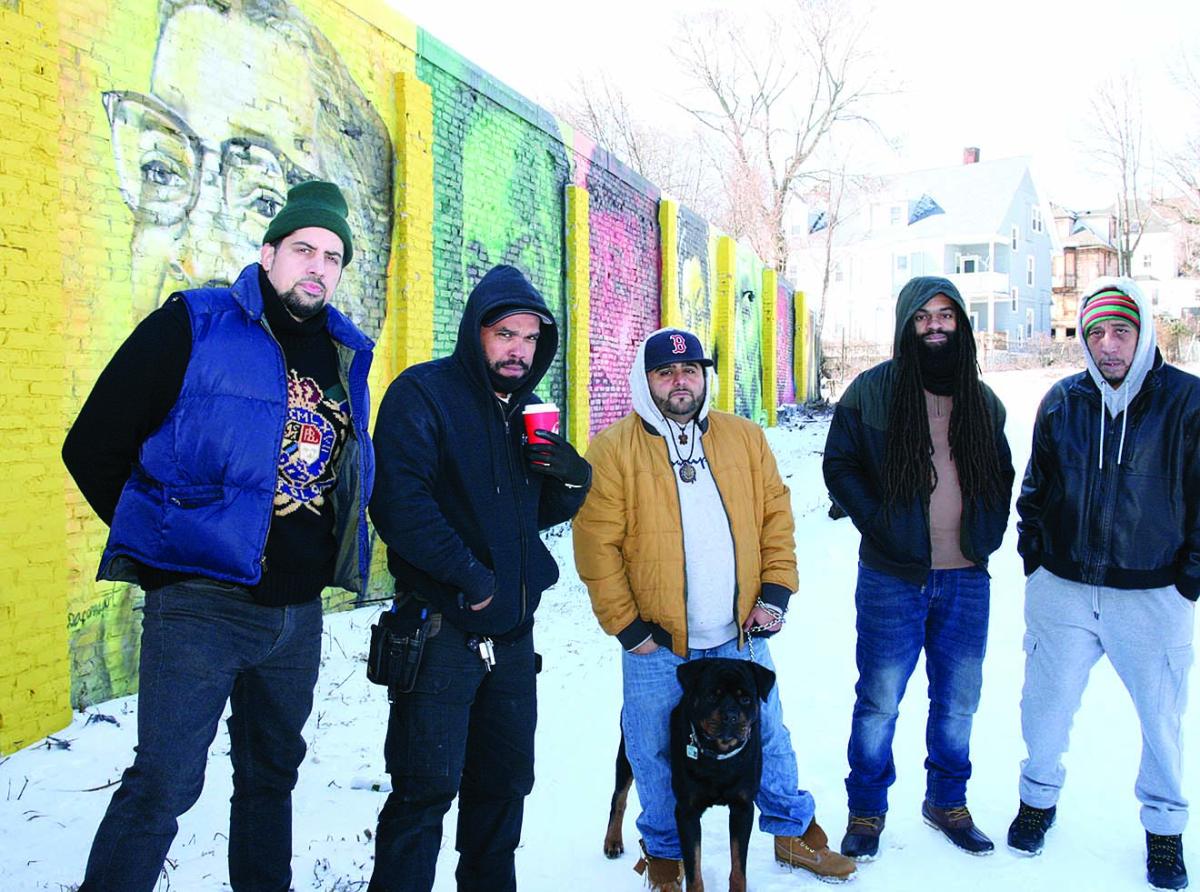 The new Boston Black History mural in Grove Hall has been in place since last fall, but artists and organizers are drawing new attention to the improvement now in honor of Black History Month. Shown here are Ricardo “Deme5” Gomez, Thomas “Kwest” Burns, Genaro “Gio” Ortega, Jeremy “Sobek” Harrison, and Jamarhl Crawford. Several other artists participated but could not be in attendance for the photo. Seth Daniel photos

Crawford said he started advocating for a mural on the wall back in 2013 when he was running for public office and had set up a trailer in the lot as his headquarters. He said he began talking to the property owner about putting the Nelson Mandela mural there, an effort that was blocked by the fact that a federal agency, the Post Office, occupied the building.

Then, last year the idea for a mural, this one depicting Boston’s historical Black leaders, was re-kindled. This time, Crawford said, the Post Office didn’t have the same concerns as it did seven years earlier. Still, before any paint could hit the bricks, there had to be a major clean-up effort.

“The first part of this project was a landscaping project,” said Crawford. “There was so much to remove from here and we had to level this place out.”

For Kwest, getting the project going artistically and then completing it last summer was a labor of love – bringing something to the community that would be a point of pride and not just another vacant lot.

“This wall has been like this for so long and sitting empty right in a part of the city where if you’re caught in traffic, you see that wall and field prominently,” he said. “When Jamarhl called for heads to come through, I jumped…The other artists jumped right on, too. It was a beautiful thing…It made quite a transformation of this wall that’s just been sitting here. As many times as people come back and forth here, it brings a new dimension to the community – and long overdue.”

Added Genaro “Gio” Ortega: “These are some of Boston’s best graffiti artists working to memorialize some of the greatest leaders in Boston. I’ve seen this wall empty for years and I used to live not far from here in my 20s. The wall was always calling for some life and some color.”

The mural captures eight Black leaders from Boston, or those have a deep connection to Boston, including Malcolm X, Melnea Cass, Martin Luther King Jr., Ruth Batson, Elma Lewis, Frederick Douglass, Ella Collins and Crispus Attucks. Each leader is highlighted in a natural panel break in the wall running backward from Warren Street. Each panel uses a distinct and vibrant color to capture the individual portraits. A scroll at the beginning identifies the leaders and the artists.
Community response has been favorable since last fall, and the artists and community leaders hope that even more people will pay attention to during Black History Month.

Ed Gaskin, executive director of Greater Grove Hall Main Streets, the mural is a great new entry point to the community. “We used to get so many complaints from residents about the lot and the wall,” he said. “Now people coming into the Grove Hall business district will have a much better first impression.”

Said Jeremy “Sobek” Harrison – an artist who has been working on numerous things in the community, including the annual ‘Graffiti in Grove Hall’ event: “I wanted to be like these guys as a kid, and now to be able to work with them on this side-by-side is such a blessing to me as an artist,” he said. “This mural is also such a blessing because I’m born and raised in this area. Driving here and going to church up the street I always saw this wall sitting here. It looked like that since I was nine or ten years old. Now it’s a light and a blessing for the community.”

WHO’S WHO IN THE MURAL LINEUP

The portraits, from left:
•Malcolm X – Born Malcolm Little, he spent his teen-age years living on Dale Street in Roxbury not far from Grove Hall. The home where he lived in Boston was purchased in 1941 by his sister Ella Little-Collins. After being incarcerated in Massachusetts for burglary, he and his family converted to the Nation of Islam and he changed his name to Malcolm X in 1952, going on to become a major leader in the Civil Rights movement and the Nation of Islam before his assassination in 1965.

•Melnea Cass was a long-time community and civil rights activist in Boston who was affectionately known as “The First Lady of Roxbury.” She was a key player in the fight to desegregate Boston public schools, and was a board member and president of the Boston chapter of the National Association for the Advancement of Colored People (NAACP). She also fought for women’s right to vote and did voter registration drives in the 1920s after the 19th Amendment passed.

•Martin Luther King, Jr., the Nobel Prize-winning civil rights activist and martyr had deep and longstanding connections to Boston. He attended Boston University and met his wife, Coretta Scott, while attending BU and while both lived in the South End on Massachusetts Avenue.

•Ruth Batson was born in Roxbury to parents who immigrated from Jamaica. Inspired by her mother, Batson was the first Black woman to gain a seat on the Democratic National Committee. She led an early challenge to the Boston School Committee on the segregated, inadequate schools in the Black community.

•Elma Lewis, who lived in her childhood home on Homestead Street, was best known for her great contribution to the arts, including in the field of education and as the founder of the National Center for Afro-American Artists. She was the long-time proprietor of the Elma Lewis School of Fine Arts and a recipient of the Presidential Medal for the Arts in 1983.

•Frederick Douglass was a national figure in the mid-1800s and had deep ties to Massachusetts and Boston. He and his wife, Anna Murray, lived in New Bedford and Lynn after escaping enslavement in the South. Many of his greatest speeches were given in Boston, and he wrote his best-selling autobiography, “Narrative of the Life of Frederick Douglass: An American Slave” while living here.

•Ella (Little) Collins was the sister of Malcolm X and lived with him in their home on Dale Street in Roxbury. She and her family joined the Nation of Islam in the mid-1950s and helped establish its mosque in Boston, which also contained a childcare center. Well-known for supporting Black and ethnic studies programs in universities all over the country, she founded the Sarah Little School of Preparatory Arts in Boston.

•Crispus Attucks was a sailor who died in Boston on March 5, 1770, when British soldiers fired two musket balls into his chest. His death, along with those of four other colonists, became widely known as the Boston Massacre. His death instantly transformed him into a martyr for the cause of revolution and freedom. He was born in Framingham and had an indigenous heritage as well.