Skip to main content
Samuele Petruccelli, Special to the Reporter

Showing off multiple generations of girl hockey players, DYH U14 players Kaylan Walsh, Riley Porter and Meredith Gracia presented flowers and took photos with Stephanie O’Sullivan (center), who was the first girl to play hockey for DYH in the 1970s. Seth Daniel photo

There was a special touch between the second and third periods of the hockey game between Boston Latin Academy and Archbishop Williams High School at William Devine Memorial Rink last Tuesday night: Stephanie O’Sullivan wasn’t the only girl on the ice as she and dozens of Dorchester Youth Hockey Chiefs walked out for a ceremony to retire her jersey, No. 28.

The trailblazer for girls’ hockey was a Massachusetts Hockey Hall of Fame inductee (2008) and US national team player. Before that, Stephanie, the middle child of 11 in a single-family home, was the first female to play Dorchester Youth Hockey at age 3 in 1974.

It wasn’t a smooth tradition-breaker. After she was initially denied a spot in the program because she was a girl, her father took her home, cut her hair, and returned to sign her up as “Steven” O’Sullivan. Said Stephanie, “He actually cut it, so you can imagine how it came out.” Her brother Tommy remembers her boy teammates calling her “Steve,” as her name was listed on her helmet.

After Dorchester Youth Hockey, she went on to play as the only girl on the hockey team at Matignon High in Somerville (“She was the only young lady in the program, and I was there 40 years,’’ legendary Matignon coach Marty Pierce said in a 2012 Globe story by Stan Grossfeld. “She just treats everybody with dignity and respect.”); she then attended Providence College, where she was named rookie of the year as a freshman and player of the year as a senior as her team won four straight ECAC titles. On the national stage, she scored 10 goals and 13 assists for Team USA from 1993 to 2001 while playing in four world championship competitions.

“I just kind of followed what I love to do,” O’Sullivan said.

Now, with a master’s in criminal justice in her portfolio, she’s a detective with the Boston Police Department and a founder of the O’Sullivan Skating Academy, which trains players across New England. 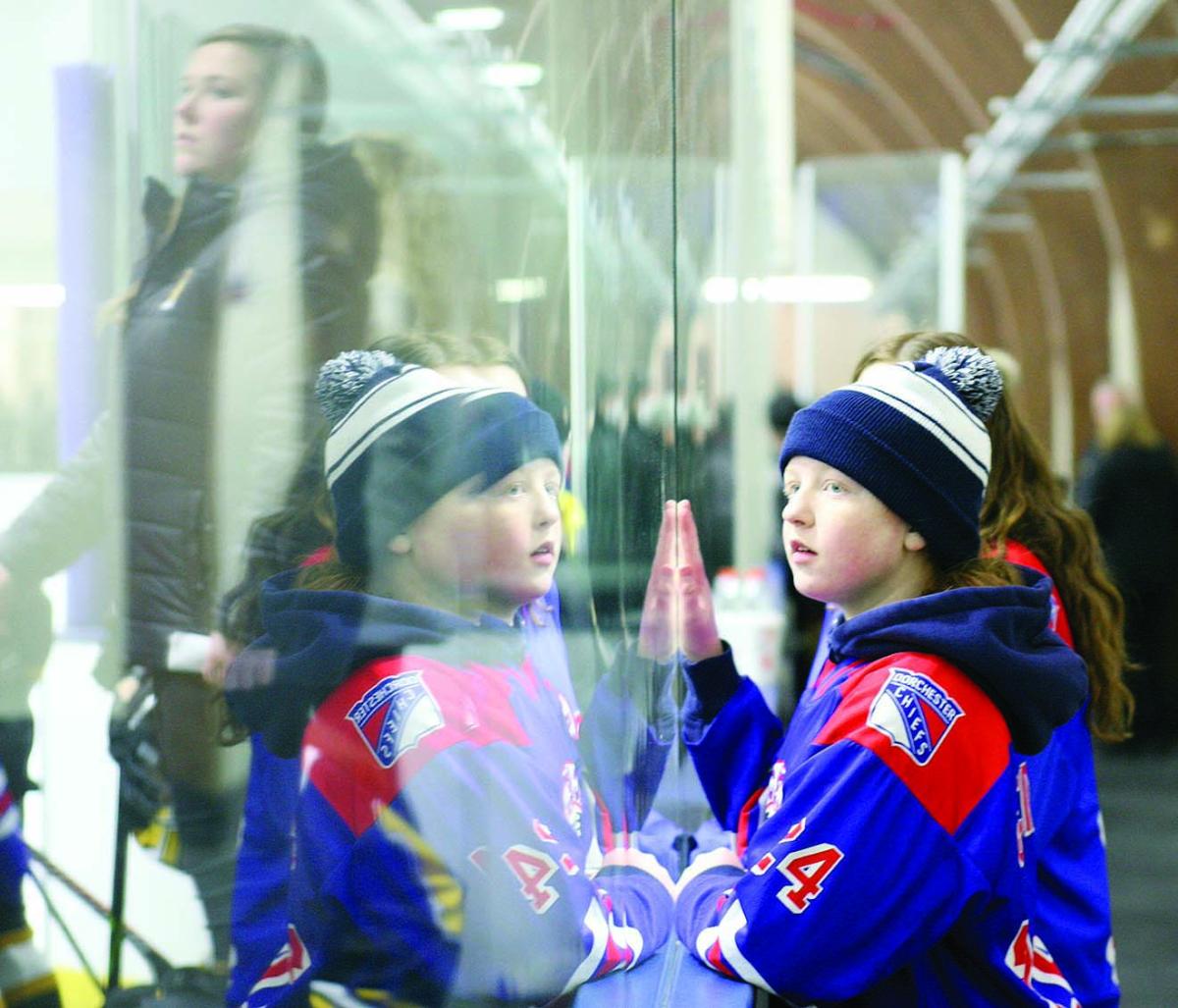 “People call me a pioneer, but it’s pretty overwhelming,” said O’Sullivan. “The growth in women’s hockey is just really tremendous, and it’s only gonna get better as we go on,” O’Sullivan said about the future of girls’ hockey in Dorchester. “The girls’ coaches down here are amazing.”

Katie Nolan, the coach of Latin Academy’s high school team, said that when she started skating at three years of age, O’Sullivan began mentoring her, saying things like “get rid of that milk crate, come on!” referring to an old-time hockey training tool. “She just turned me into an absolute elite player. She helped me develop a lot, not only as a player, but also as a person.”

Nolan, who’s also a U12 girls coach for The Chiefs, said that with the ceremony, she felt things coming full circle.

“Playing DYH growing up, we didn’t really get this type of hype or, really, recognition for girls hockey, so seeing this tonight was absolutely amazing,” she said. “The younger girls deserve to see it – Okay, wow, girls’ hockey is a big deal.”

Dorchester Youth Hockey sent its first girls team onto the ice during the 2004-2005 season and it won its first championship three years later. This is the first year that the Chiefs have three teams: Under 10, Under 12 and Under 14.

In game action on Tuesday, Archbishop Williams defeated Latin Academy, 4-1, with West Roxbury senior Jill Gallagher scoring her team’s only goal. Both teams came onto the ice to hug and take photos with O’Sullivan.

Andrew Daley, a Dorchester Youth Hockey and Latin Academy alumnus, enjoyed the event on Tuesday. Now living in Weymouth, he recalled playing Youth Hockey with one girl on his team, Emily Sweeney, now a reporter for The Boston Globe. “Since then, obviously, girls hockey has exploded,” he said.

Cassellius, who cheered for BLA, said she didn’t play hockey growing up. When she was 40, she began to skate with her children, and is still playing 14 years later.

“It’s a great sport to play with other women, and it’s also a great sport that teaches you a lot of soft skills about teamwork, about how to get scrappy in the corners, and still get up,” she said.

Murphy, a friend of the O’Sullivan family, attended St. Ann’s grammar school with Stephanie. Sporting BLA clothing, Murphy said she came to support the players. “Nothing stops girls hockey, even with the Zamboni breaking,” she added. 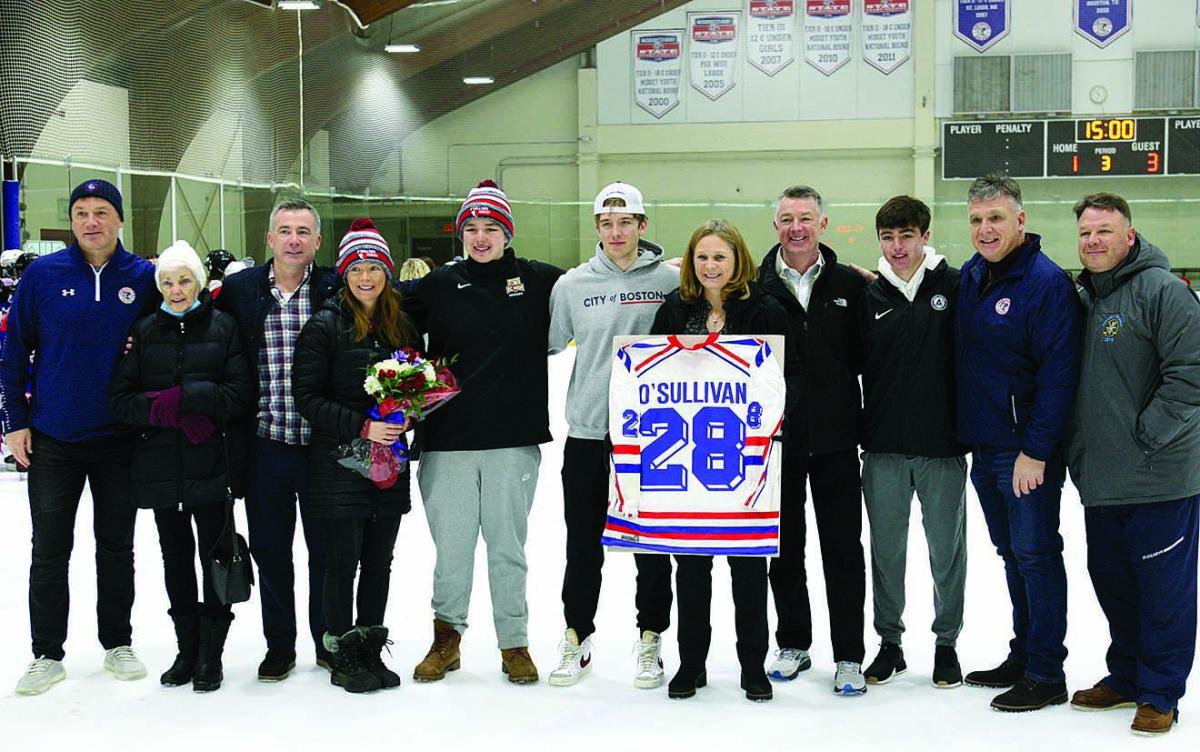 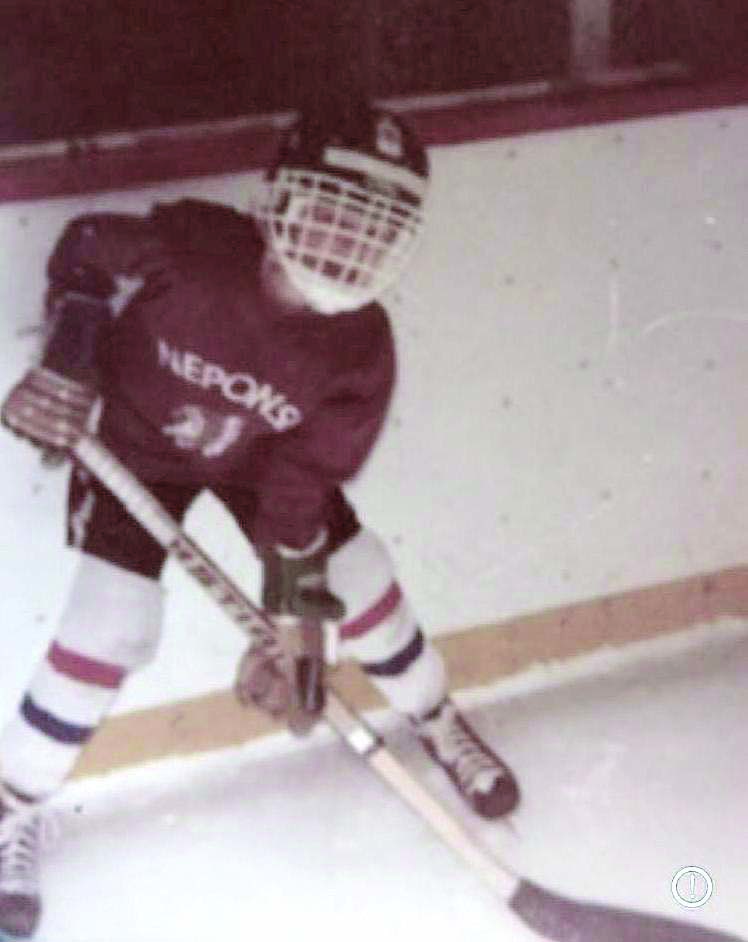 A young Stephanie O’Sullivan on the ice for the Neponset squad. 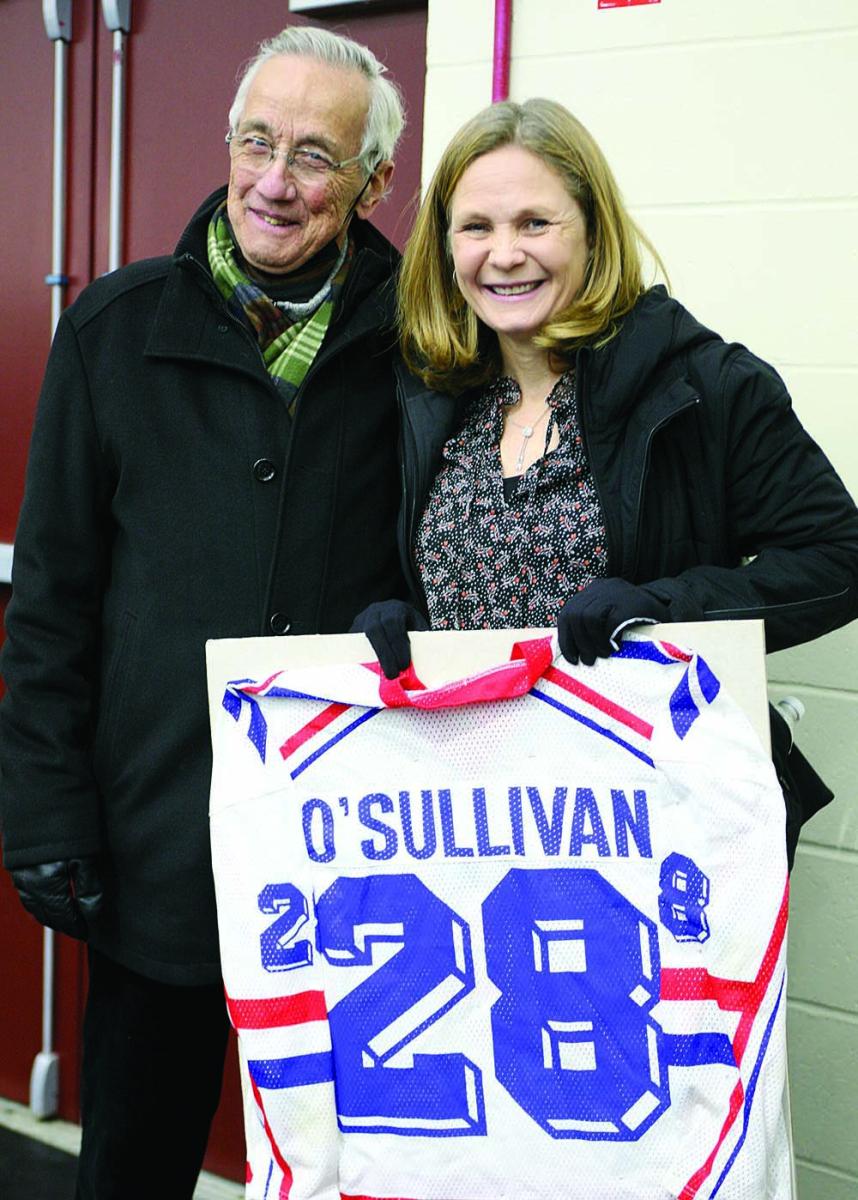 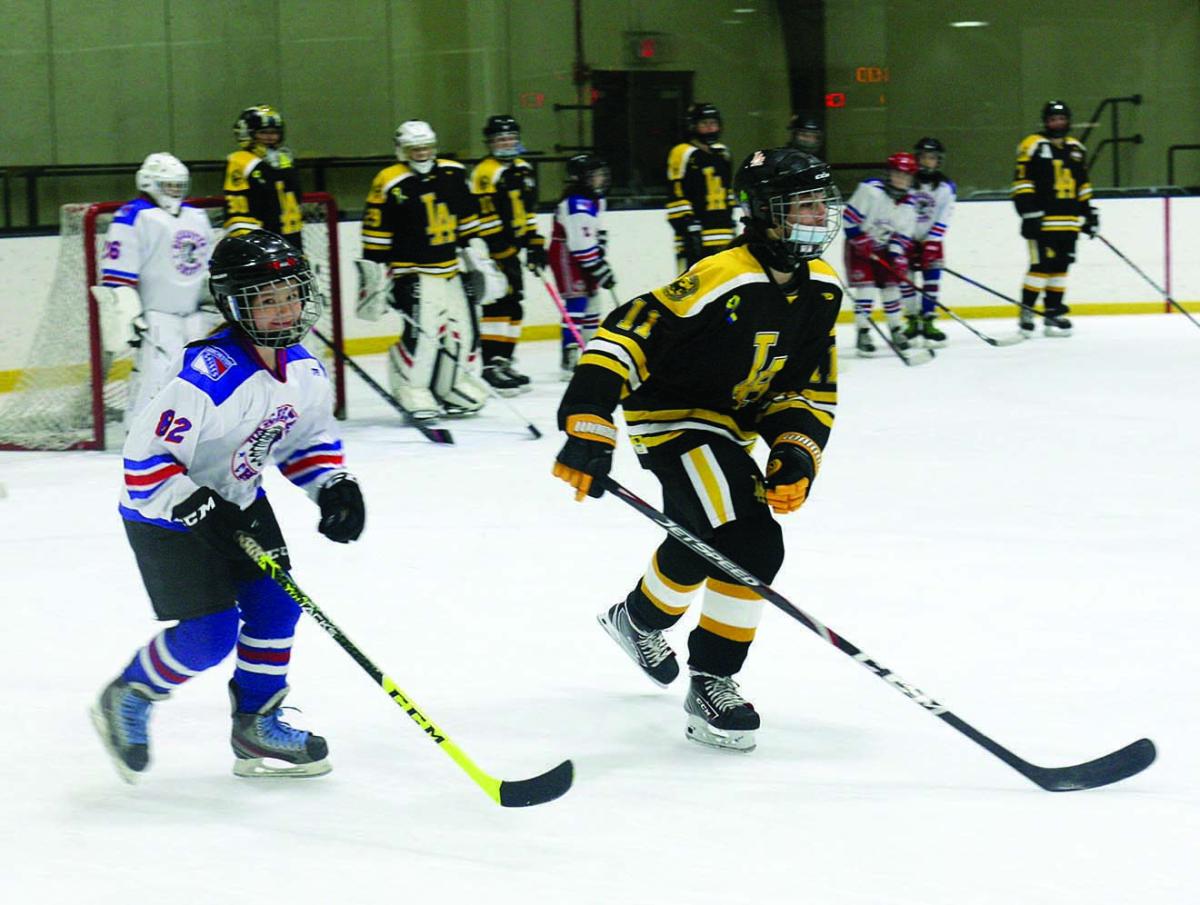 DYH U10’s Penny Walsh was all smiles as she skated out pre-game with BLA Forward Caitlin Sweeney. 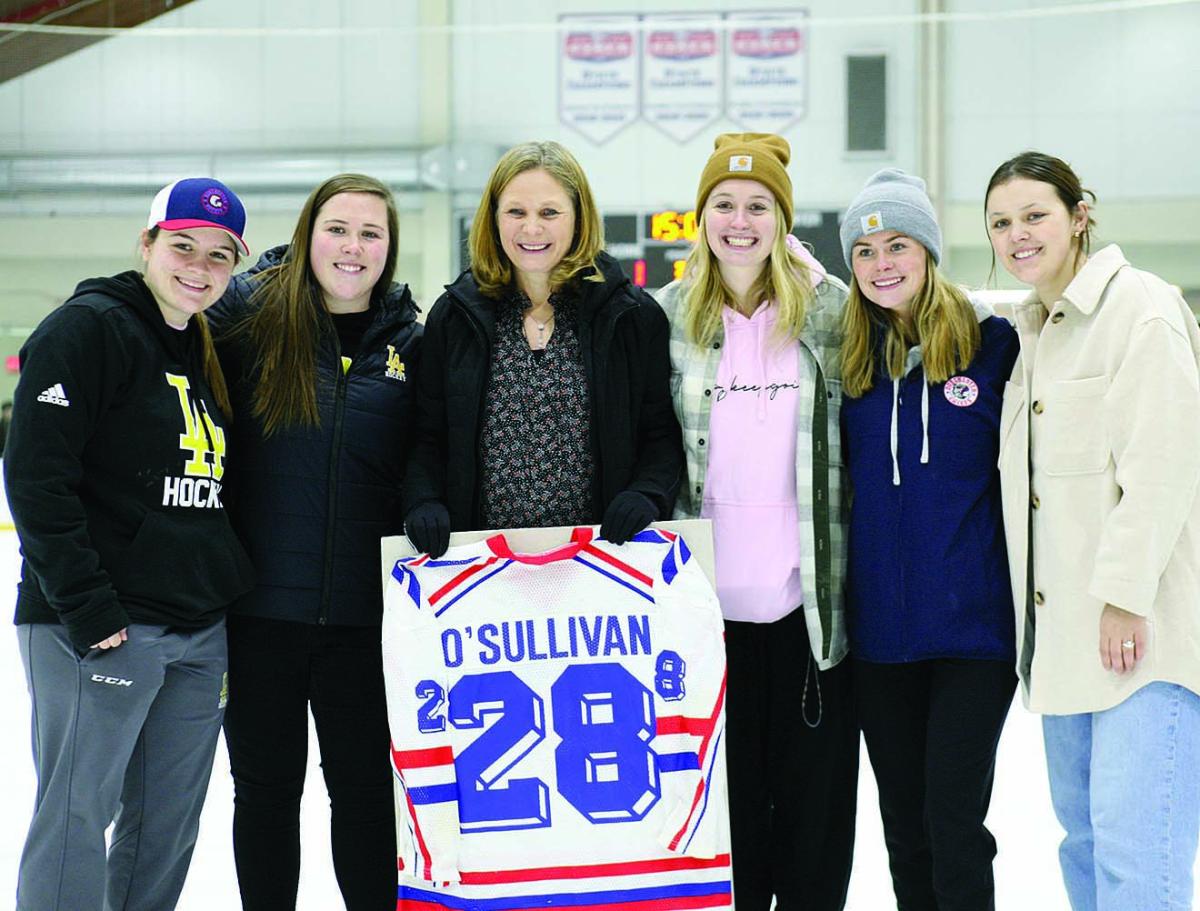 Stephanie O’Sullivan shows off her retired jersey alongside fellow Dorchester Youth Hockey standout alums Patrice Guerard, Katie Nolan, Lily Galvin, Paige McEachern, and Maisie Whalen. All noted that they followed in the footsteps and example of O’Sullivan when they chose to play hockey. Seth Daniel photos 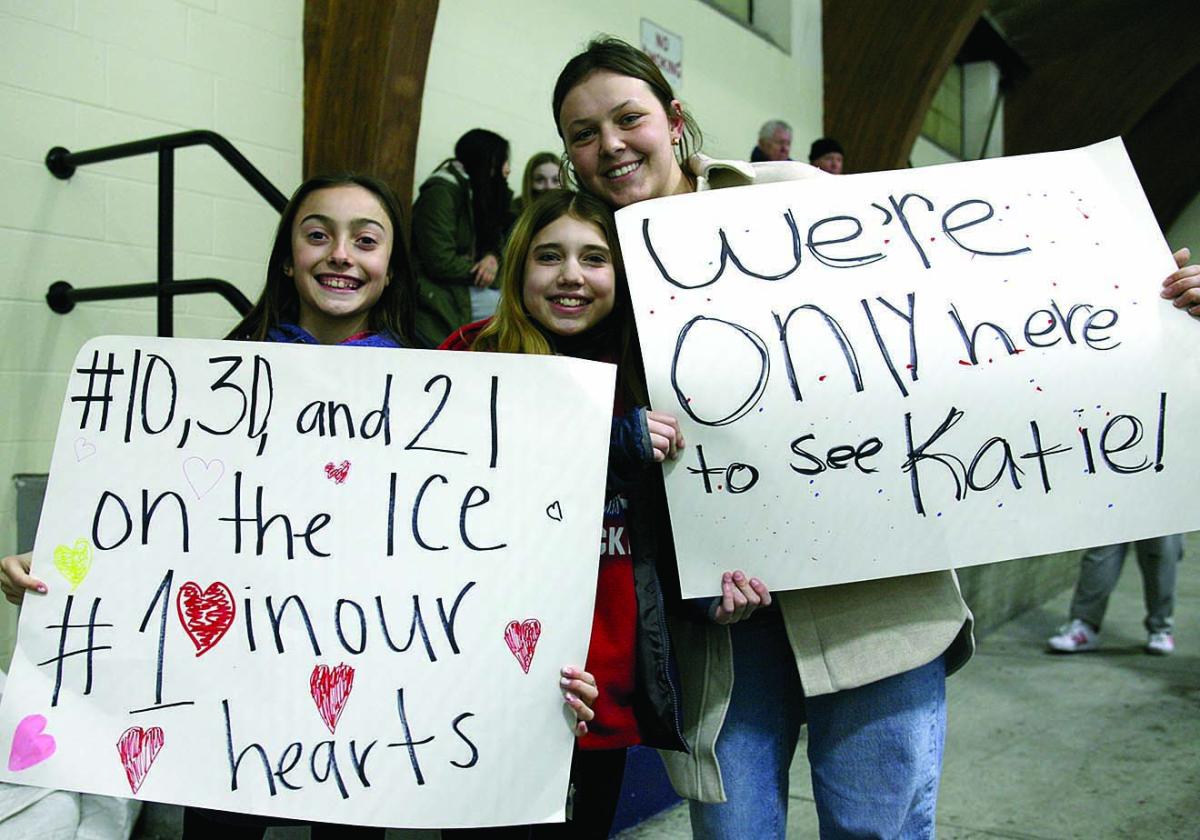 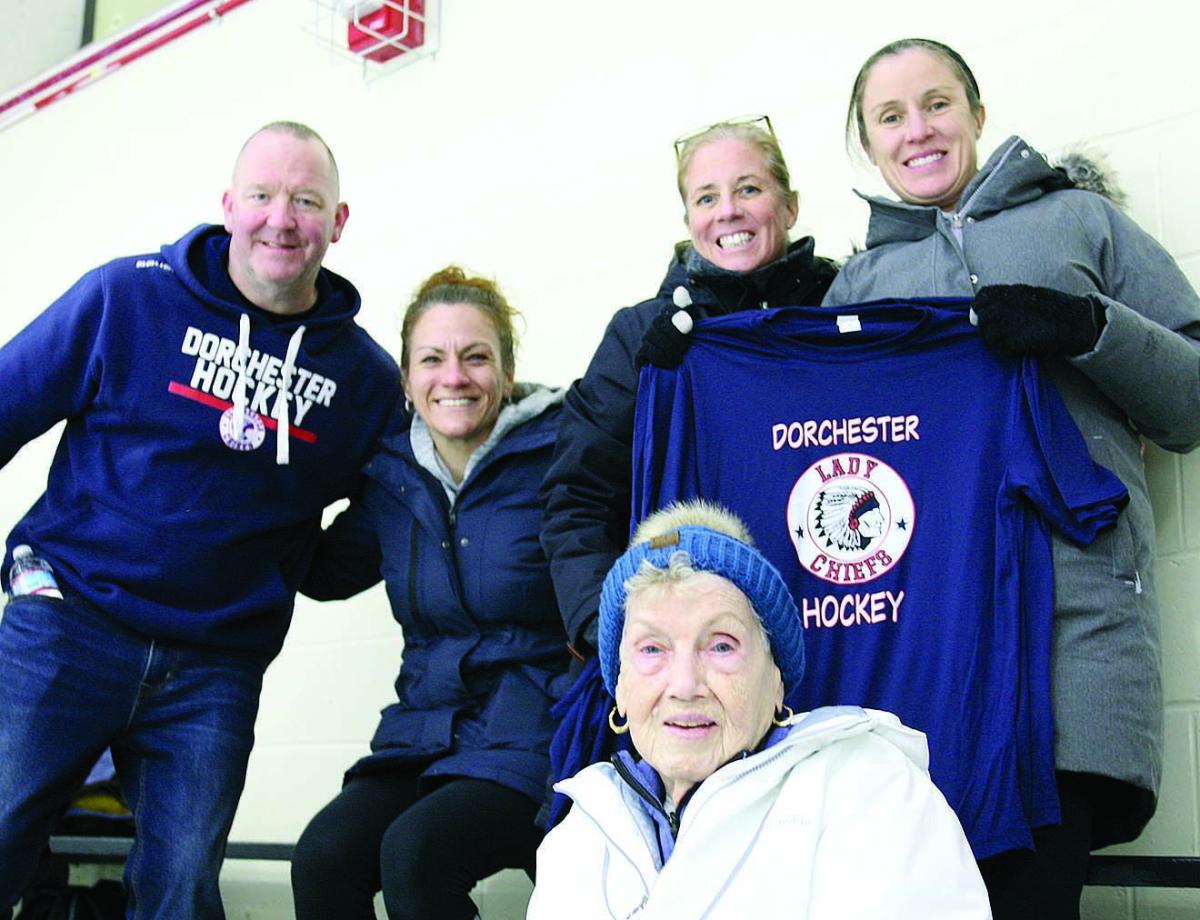 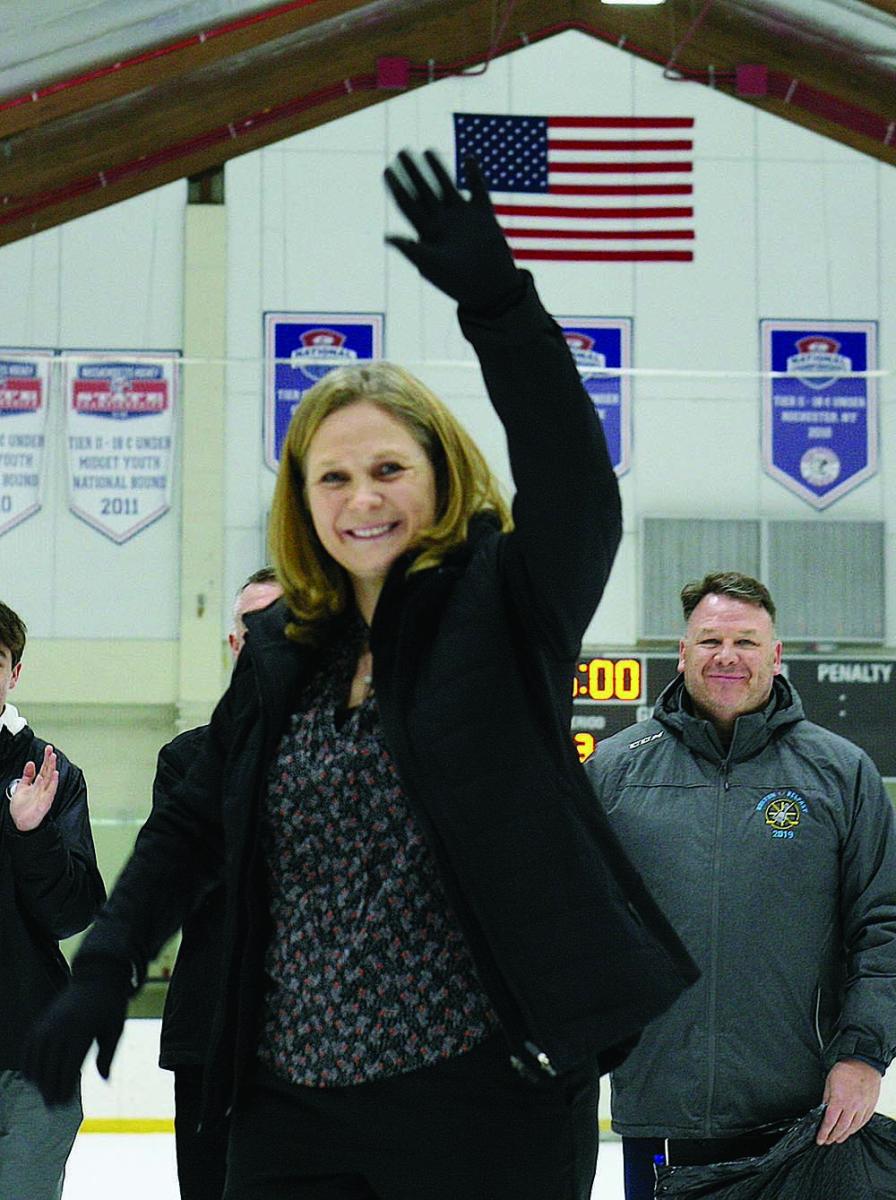 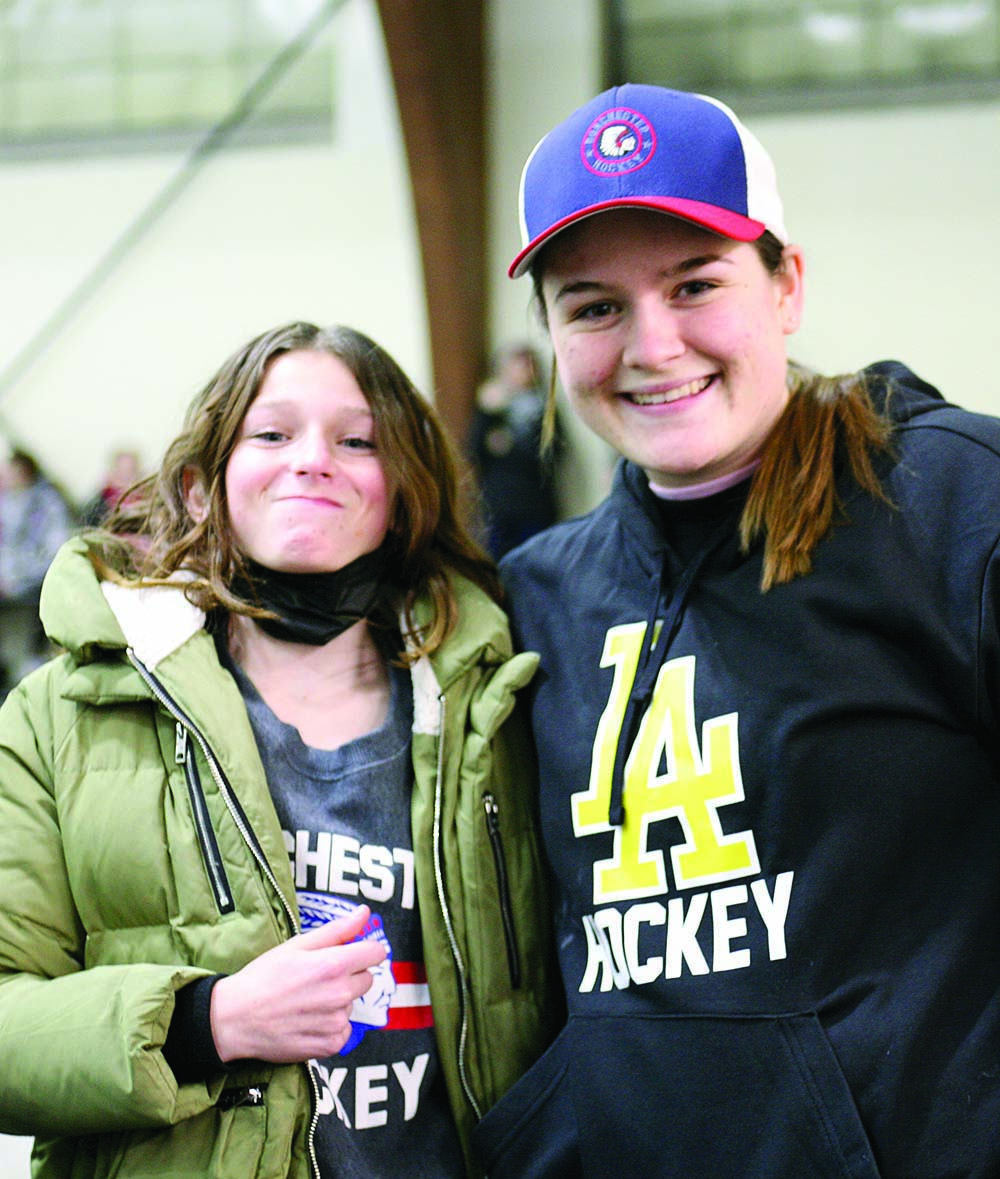