A video showing portions of a verbal confrontation between a white Boston Police officer and a black pedestrian on Charles Street in Fields Corner went viral this week and opened up a new front in a long-bubbling dispute over how police engage with people in our community, particularly young men or boys of color.

It’s not possible to make any final judgments based solely on the video, which was made by the civilian, who posted the record of the encounter with the officer from his perspective.

Both sides could have handled the situation better.

Still, the behavior of the police officer was particularly troubling. An authority figure, armed and with the power of arrest, he seemed intent on provoking a negative response. He insinuated that the young man was somehow out of place walking on a public street near the Fields Corner business district, right next to the T station, in the daytime. He insulted him.

We expect a lot of our officers. It's a tough job. Still, it was not a good look for the Boston Police.

The BPD is having a run of bad publicity and some if it is of their own making. They were widely panned for an ill-advised Black History Month tweet on Feb. 11 that saluted Red Auerbach. The BPD’s media team first deleted the tweet and later apologized; the mayor and the police commissioner apologized more expansively.

But, whoever is at the controls of the BPD’s most powerful information tool— the 522,000-follower strong Twitter account, persisted in sending mixed messages. They “liked” articles and videos that pushed back against the backlash to the Auerbach tweet. The BPD official Twitter handle started following the Twitter account of Turtle Boy Sports, a blog that traffics in anonymous social media commentary that is often vulgar and racially-charged.

On Feb. 12, Turtle Boy lauded the BPD’s initial Auerbach tweet and ridiculed Mayor Marty Walsh— whom they call “Mayor Moron.” The same blog then heralded the fact that the Boston Police Department’s powerful Twitter account was following them— an affirmation, as they saw it, of their position.

It’s hard to quarrel with that assessment.

The post concluded with this language about the black community:

“…[T]he fact of the matter is that cops are the best thing that has ever happened to the black community. The second they step down policing efforts in places like Baltimore the black murder rate skyrockets. Once again, these are facts. Facts don’t care about your feelings.” 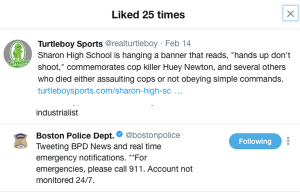 When I asked the BPD officer in charge of communications— Lt. Mike McCarthy— to explain why this happened, his answer was, frankly, insufficient.

“It is not known why a certain tweet was ‘liked’ by the BPD,” McCarthy wrote. “We can look into the reasons.”

In a subsequent message, McCarthy added: “The BPD does not agree with the ‘like’ on the post and in fact un-liked it once it was reviewed and ultimately un-followed the blog.”

Actually, the BPD “like” was still up. It only came down on Wednesday morning following an inquiry from the Reporter.

So, for two weeks, the official mouthpiece of the BPD was on the record supporting this for all to see.

It raises a serious question: Why is the official Boston Police twitter account "liking" a racially-charged rant that concludes "cops are the best thing that ever happened to the black community” in the first place. Why are they frequenting a site like that at all using the BPD account? We rely on these same men and women to disseminate critical information about public safety— and this is the nonsense that they are occupied with?

It’s a troubling indicator of a “sorry, not sorry” attitude that does a disservice to the men and women who we ask to police our streets— and who do not engage in this sort of behavior. City government is sending out a very confusing set of messages about its posture towards communities of color.

It’s deeply problematic and requires a full-throated explanation from the Commissioner himself.

Bill Forry is the editor and publisher of the Reporter.