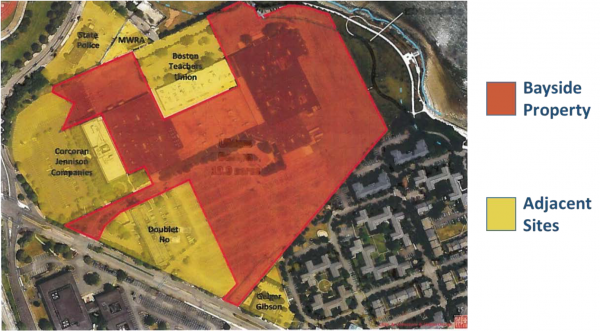 In a memo sent to the UMass Boston community on Tuesday, interim Chancellor Katherine Newman hinted that news about the “selection of a developer” to build out the twenty-acre waterfront Bayside parcel will likely be made public “this fall,” a season that begins on Saturday.

“Our goal is to create a mixed-use business district that attracts innovation companies that will partner with the campus in a variety of ways,” Newman wrote. “Choosing a developer is just the first step and is necessarily a confidential process. But when that concludes, we enter a different phase of planning, one that will be inclusive, involving many opportunities for input from faculty, staff, students, the broader community around us, and other stakeholders on a number of issues, including design.”

Let’s step back and consider how we got to this point, shall we?

UMass Boston bought the Bayside site in 2010 for a sweet $18.7 million after its previous owners— Corcoran Jennison Companies— lost the property to foreclosure. In the interim years, UMass has alternated between using the Bayside site for its own purposes— or leveraging it for other undertakings. The site was briefly the centerpiece of a doomed effort to lure the Olympics to Boston. (Bayside would’ve housed the athletes’ village.)

Next came Robert Kraft’s sports empire saying it was “invited” to submit a proposal to use the site for a sports/concert venue. The deal was snarled by thorny land-use problems that are ever-present on Columbia Point— but also by the steadfast refusal of UMass and Kraft officials to speak about the idea publicly.

Earlier this month, after two years of refusing to provide more than vague descriptions of the Kraft talks, UMass officials were finally forced (after an order from Attorney General Maura Healy) to comply with repeated public records requests made by CommonWealth magazine. The documents they reviewed showed that Kraft was prepared to absorb the cost of building a 25,000-seat stadium (probably $250 million) on the site and would have kicked in $1.5 million to the state annually for 25 years; they also disclosed payments of $2.5 million in annual rent (in a 99-year lease) to UMass, with even more possible if annual ticket sales allowed for it, according to CommonWealth.

It has always puzzled this observer: Why didn’t Kraft, Marty Meehan, and associates disclose these terms and other aspects of the potential stadium “deal” before declaring it dead? Why not show the public its renderings, and explain the financials and potential benefits?

In the wake of the stadium deal’s collapse, UMass actually followed a course recommended repeatedly in this space: They made the Bayside parcel the subject of a Request for Information (RFI) to the larger development community. The idea, all along, was to generate ideas for the highest and best use of this precious acreage in a land-starved city. Sixteen companies submitted responses to that RFI last summer, a strong indication that there’s a real appetite to partner and produce a potentially transformative neighborhood.

Sadly, that’s all anyone has been able to say about the process since then. UMass has reverted to its clandestine posture with regard to the Bayside parcel. Despite our requests for information, the contents of those 16 proposals have been kept sealed, with the UMass Building Authority citing the same public records exemptions that it used to stay silent on the Kraft talks.

Now, we learn that UMass will select a development partner and then come to engage the community at large. It’s a necessary device, we’re told, to enhance the UMass position and, presumably, drive up the price among competitive bids.

We’re all for the state getting a fair shake— which is why so many people objected to a side deal with Robert Kraft. But, when it comes to this parcel in particular, leveraged by quasi-public funding and bonds and cheek-to-jowl with publicly held lands like the Dorchester Harborwalk— the public deserves more input, and sooner.

UMass should stop hiding behind its exemptions defense and give the public a full picture of the options that it is weighing now behind closed doors. Let’s see what the various proposals and development teams consist of — and let’s see them now. That is in the best interest of everyone—the university, the potential developers, and the public.

Bill Forry is the editor and publisher of the Reporter. He may be reached at bforry@dotnews.com.