New stores and restaurants are set to open this month at South Bay. Bruce Martin photo

As South Bay Center enters the next phase of its expansion plan, the coming weeks will bring logistical changes to the center and the surrounding neighborhood, as new throughways open and the project’s “urban grid” layout begins to take shape.

The newest district of the shopping center, which is in the midst of a facelift led by the real estate developer EDENS, will soon be several steps closer to its final status as a walkable retail destination.

In a tour of the site given to the Reporter last week by Brad Dumont, managing director of the company’s northeast division, he detailed the company’s vision for the 11-acre site that, he said, provided the opportunity for a “blank canvas” when EDENS acquired it in 2014.

Along with pedestrian-centric streets and lush landscaping, the blueprint also envisioned a South Bay more integrated with the adjacent residential community known as the Polish Triangle.

This bypass road, Jan Karski Way, was set to open this week, along with the newly redesigned West Howell Street, which will provide a much-needed connector from the retail district to both the I-93 frontage road and the Andrew Square and its MBTA station. 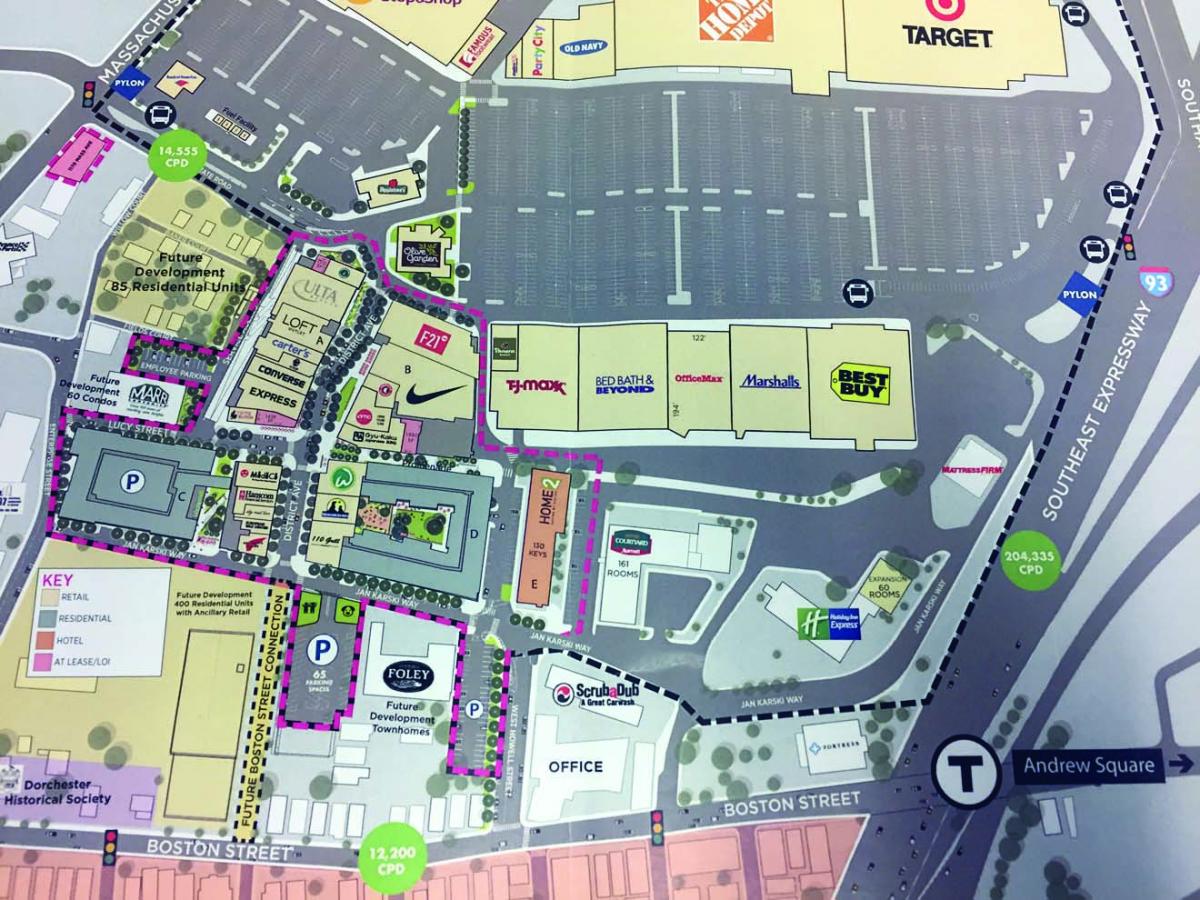 A map of the area under development shows new entry ways to South Bay.

Dumont says the developers worked with the Polish-American Club of Boston to name the route after Karski, a hero of the domestic Polish resistance during World War II and later a professor at Georgetown University. The bypass will offer another entryway option for drivers and especially T-riding pedestrians, who in the past were forced to travel a hazardous walkway along Southampton Street traversing busy on-ramps to the interstate along the way.

With these new entry points, the project’s developers are aiming to ease access to the shopping center, while at the same time reducing the traffic impact on the adjacent neighborhood.

“What was really important to the community when we got this approved was that they didn’t want people coming off and congesting Boston Street,” said Dumont. “So, we worked with the state and the city to get a MassWorks infrastructure grant to build a bypass road so that now you can connect all the way to Enterprise Street. If you come off the interstate, you can come into the project or connect to Enterprise without ever having to go on Boston Street.

“Additionally, we completely revamped West Howell street with new pedestrian walkways and really cleaned up this entire area, so that if you’re coming from Andrew Square, we have a shuttle that can take you to the property. Also, if you’re walking across Boston Street, now you have a clear-set pedestrian pathway into the project.”

Jan Karski Way will also provide access to a 65-space parking lot that will include a playground and a dog park. Across the street is the eastern end of District Avenue, which was until recently blocked off for construction and is lined with the next block of incoming restaurants and retail shops.

The next business set to open its doors in South Bay Center is Wahlburgers, which will have a grand opening sometime in December. Japanese BBQ joint Gyu-Kaku will open in late January, with Totto Ramen and 110 Grill, a contemporary American eatery, slated to launch in the spring and summer, respectively.

The rest of the block will be rounded out by MidiCi pizza, Hanscom bank, a nail salon, a European wax center, a Red Wing Shoes outlet, and a pet store. All businesses are expected to be ready to open by the summer.

The only spaces yet to be leased are expected to become a cocktail bar and another locally owned restaurant, according to Dumont. Along with Wahlburgers and MidiCi, they’ll form what Dumont calls “the heart of the project,” where curb-less streets will allow the entire plaza to be cordoned off for events and community programming.

The variety of regional food options are in tandem with EDENS’ localized approach, which informed their decision to employ local artisans and craftspeople to design accents and murals that give the center a decidedly Dorchester flavor.

“Our philosophy,” said Dumont, “is that in order to really be long-term owners and operate these places the right way, you have to have boots on the ground. You have to have people in the areas in which you own the properties.”

Josh Luke and Meredith Kasabian of Uphams Corner-based Best Dressed Signs are among those who have enlisted in this locally based creative team. They created the alluring “Made in Dorchester” mural that welcomes visitors to the center. 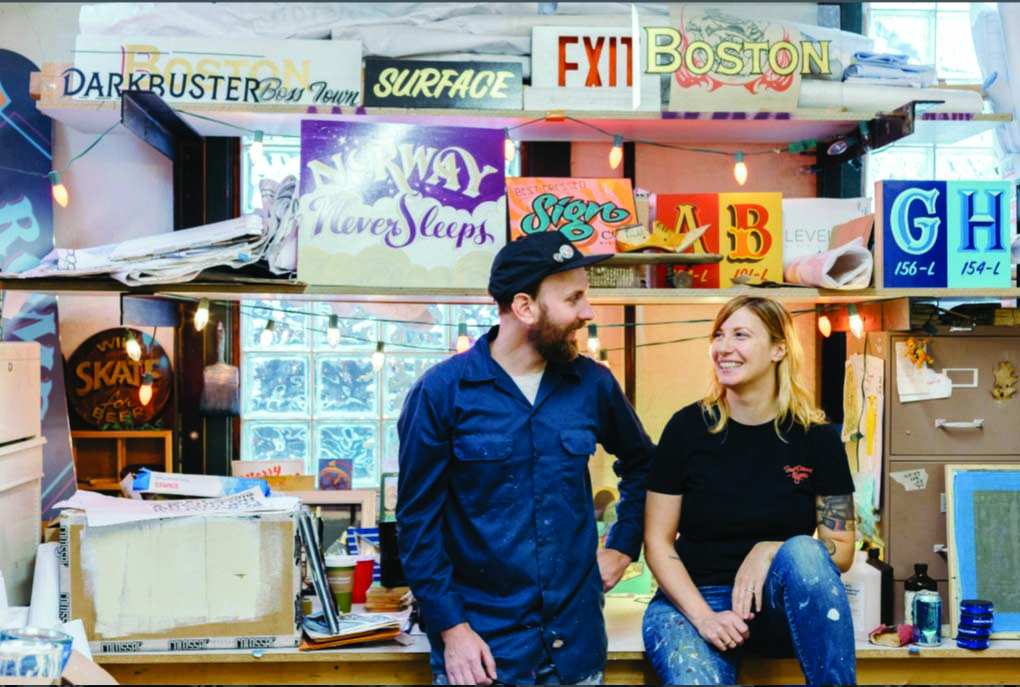 Near the entrance at the corner of Allstate Road and Mass Ave, Cedric Douglas and Julia Roth of The UP Truck, an Uphams-based mobile arts lab, repurposed the side of corrugated metal warehouse for a mural accompanied by a Margaret Mead quote: “Never doubt that a small group of thoughtful, committed citizens can change the world.”

And on the face of the new Starbucks, Matt Koestner of Bob’s Welding and Fabrication designed a pair of bronze sconces and two bronze seals adorned with inscriptions noting Dorchester’s founding year, 1630, and its official Latin motto “Pietate, Literis, Industria.”

According to the Dorchester Historical Society, housed a stone’s throw away from South Bay Center on Boston Street, “the motto signifies that piety, learning, and industry were the prominent virtues which the early settlers coveted, and which their descendants unanimously accord to them.”

Other local contributors include Maria Molteni, who painted a decorative crosswalk mural, and carpenter Phil Bucci, who crafted the wooden planter boxes that accent the front of the Nike store.

With this community-inspired approach, the developers hope to make the shopping center “a gathering place,” as opposed to the purely transactional, in-and-out mall experience. In describing his vision for the rest of South Bay, Dumont indicated that EDENS is dedicated to the project for the long haul, and hinted that the rest of the shopping complex could look more like the new “Town Center” district in a matter of 10 or 15 years.