Above, the Treadmark building—2.0— as seen on Dorchester Avenue in March at a topping off ceremony.. Maddie Kilgannon photo

It has been a year since a devastating six-alarm fire ravaged the Treadmark building at Ashmont, and after some demolition of the original structure, the six-story building – with its promise of 51 affordable rental units and 32 condominiums – has risen again on the former Ashmont Tire site, right across Dorchester Avenue from its sister building The Carruth, on track for a completion mid-November under the auspices of developers Trinity Financial.

On the afternoon of June 28, 2017, flammable materials ignited near a faulty exhaust pipe connected to a basement generator on the roofline of the almost-finished Treadmark complex. With the sprinklers off, awaiting a final Fire Department inspection that week, flames spread through the top two floors and burned for nearly 16 hours, late into the evening and early the following morning as the neighborhood stared in horror and firefighters drowned the building with water before covering it with a storm of fire suppressant foam.

The building was so damaged, either by fire or water, that it had to be demolished to its first-floor concrete base and rebuilt from there.

“Honestly, I don’t know how we got through those days after the fire, which turned into weeks and then months,” said Jim Keefe, an Ashmont Hill resident who is the president of Trinity, on Tuesday evening. “It was totally surreal. It felt at times that the only thing that kept us going was the incredible outpouring of support we got from friends of Trinity, especially from our friends in Ashmont. It was as if people were sharing our grief right along with us.”

Local groups and residents found watching the Treadmark’s demolition to be a haunting experience.

“It was really hard while it was coming down, psychologically,” said Jenn Cartee, executive director of Greater Ashmont Main Street. “It felt like something of a pall on the neighborhood, because it represented so much energy, effort, and money, and vision for what the neighborhood would be.”

But all that has turned right around, she said. “At this point where it’s close to completion again, it’s the opposite, where you have the energy of the potential of the households who are going to be new neighbors and patrons for the local businesses who have held on.” Between the Treadmark and the forthcoming 1943 Dorchester Ave. project, Cartee said, the community is looking forward to welcoming almost 150 new households over a few months this winter.

South Boston-based American Provisions, an artisanal grocer, made it clear from the get-go that they would be committed to opening their second location in Dorchester as the Treadmark’s anchor tenant. Cartee said their ground floor space will be ready for them in November.

“Them sticking with it is also another sign of energy and vision and neighborhood, “ she said. “This process, though hard, has made it clear to them that they made the right choice in term of location.” 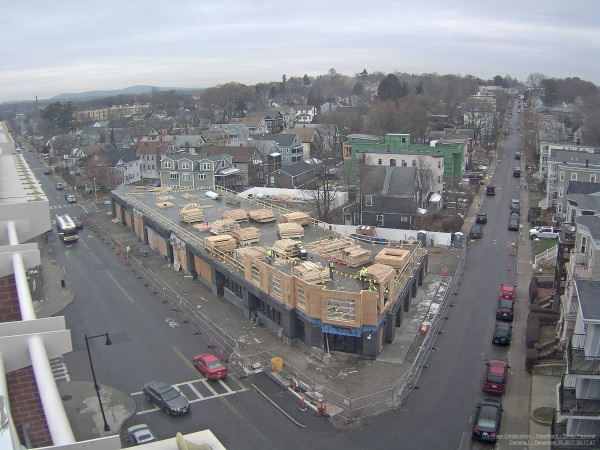 Keefe said the exterior “may look like it’s further along, but technically we are only 54% complete on the rebuild. While things are moving along well, we still have a lot of interior and exterior finish work to complete.”

Building designs and units remain identical in Treadmark 2.0. The 51 rental units are available to those making 60 percent of the Area Median Income, selected through a lottery. Four of the condominiums are available for residents making 80-100 percent of area median income.

"The Treadmark represents the best of the way Boston does development today," said Sheila Dillon, Boston's chief of housing. "Building on the success of the Carruth, it's smart, transit-oriented development that will not only bring needed units of housing to the neighborhood, but will also support the Main Streets districts and this whole community. The rebuilding of Treadmark is certainly a testament to the resiliency of this vibrant neighborhood and a development team that's worked incredibly hard for so many years."

City officials said they are sorting through the lottery for the rental units that has already occurred, and if they exhaust the number of people who were selected, the city will begin a second marketing process. Trinity is finalizing a sale plan for the four income-restricted condos and will submit it to the city before moving to market them.

According to Gibson Sotheby’s realtor Kerry Dowlin, who has been selling the market-rate Treadmark condos along with agent Tim Deihl, “Everything’s going great; we’re almost completely sold out.”

Maybe one unit is left to be sold, Dowlin said an interview on Tuesday. Out of the original 28 market-rate units, ten buyers hung in there after the fire and committed to their condos, leaving 18 units to be resold.

“People have been really positive from our standpoint,” Dowlin said. They started selling the condominiums again this spring, which were initially listed for $339,000 one-bedrooms to $539,000 two-bedrooms, and they were promptly snapped up in this booming housing market.

“It’s always surprising in a way that people would buy something sight unseen,” Dowlin said. “All we’ve been able to show them are the renderings and sample finishes in the showroom... It’s among the more affordable brand new construction projects of its kind, so close to public transportation. It’s just done exceptionally well and we’re really pleased.”

One of the ten buyers to wait it out, Carol Owens, is balanced on the tightrope of excitement and nervousness at the prospect of finally moving in, she said in a phone interview from Cancun.

“Last year was a complete and utter blindside for everybody involved, but everything is going to happen this fall, so I’m excited this is moving forward,” she said. “ I’m trying to walk the line being hopeful that this is going to happen and not letting my hopes run away with me, which is kind of strange,” she said with a nervous laugh.

Owens was lucky in that she had the option to stay put. Her condo in Cedar Grove had piqued the interest of several buyers, and she had an appraiser scheduled to come by the day after the fire. But when the Treadmark burned, Owens got on the phone, cancelled the appraiser, and decided to stay in place until the rebuild was complete.

“I was really looking forward to something new, a new convenient lifestyle,” she said, where she would not be at the mercy of the whims of an endearing but weather-dependent Mattapan High-Speed Trolley.

Watching the building being rebuilt was a psychological boost, she said, echoing Cartee. “I’m psyched,” Owens said. “I’m ready. I could be ready tomorrow.”