A draft rendering of the proposed new exterior of the former Cataloni's bar shows the desired rehab of the busy corner lot. Image courtesy Ben Virga

After a contentious abutters meeting with some 70 attendees at the Strand Theatre on Monday night, the owners of a recreational marijuana business that they want to set up on Hancock Street in Uphams Corner changed their business model from a traditional walk-in retail to an app-based, appointment-driven system.

On Tuesday, co-owner Benjamin Virga said his team decided to make the switch after neighbors spoke out forcefully the night before against the current plan, pointing to possible problems with traffic and expressing their qualms about having this type of business in the heart of the village.

In an interview with the Reporter, Virga, a real estate broker and property manager, said that “based on the meeting last night and in order to listen to the legitimate concerns of neighbors, the overriding concern on the new site is traffic and its impact, we decided that going forward we will open a reservation-based retail store that will allow us to limit customer lines on the exterior and limit the number of customers and staff on site at any one time.”

Virga and his business partner, Luke Marut, are proposing a recreational pot store at the former Cataloni’s bar, closed since 2010 on a 2,200-square foot lot at 8-10 Hancock St. After early objection to a nearby site, the owners secured this new location.

They have a purchase and sale agreement with the owner and expect about half of their business to come from deliveries and online orders. Virga said he hopes to hire 25 to 30 employees, prioritizing local residents, who would be  “highly trained and very, very well paid.”

Most of their sales figures would come from cultivation and wholesale distribution from their forthcoming Berkeley facility. About 7 percent of their overhead costs would go to the commercial store.

Over the next 12 months, minimum, that it would take to get approvals and licenses across city and state levels, Virga said they will have time to refine their model and meet with the groups that the mayor’s office identified as stakeholders - Hancock Street Civic Association and Jones Hill Civic Association. Members from other groups nearby, like Meetinghouse Hill Civic Association president Shirley Jones, said they felt that they, too, should have been consulted.

“Don’t want it, don’t need it,” said Jones. “Raising my grandkids… I love where I live. We would like for you to come over to Meetinghouse Hill. We don’t want to be ignored.”

On the whole, the owners were confronted by an inhospitable audience on Monday night. Neighbors like Stan Jones expressed skepticism about studies showing that marijuana shops either reduce crime or have a neutral effect on crime in an area.

“What you’re doing is bringing in a different element of crime, and we’re already dealing with crime with liquor stores, which are legal,” Jones said. The problem is loitering, getting high, arguing, and then that is when the guns start to happen.”

As to the basic design of the proposed shop, Virga’s team hopes to refurbish the building and put in and maintain planters. They would install the required suite of security features, cameras inside and outside the building, at every door, most with an audio or light component that would scare off a prospective burglar, and be hooked into a feed that the police could access. Security detail would also be on site.

City Councillor Frank Baker was among those worried about safety when deliveries were made and cash removed. The shops are coming, he told the group, adding that he had seen five proposals in his district so far.

“Not to pick on any certain neighborhoods, but I would think places like downtown, Newbury [Street] has already blocked one,” Baker said. “That’s where we should be looking at putting them. To talk about equity in this business in the same sentence as putting a dispensary in it’s a little bit disingenuous.”

Virga noted on Tuesday that the site was near a Walgreens that has a pharmacy stocked with opioids, and they were not being robbed. The same risks are in place for bars and other cash businesses, he said.

“I think it’s a little insulting to the people of Uphams Corner, “ he told the Reporter, “to say that we can’t pull a van up to our shop without guys armed with Uzis coming to abscond with our property.” 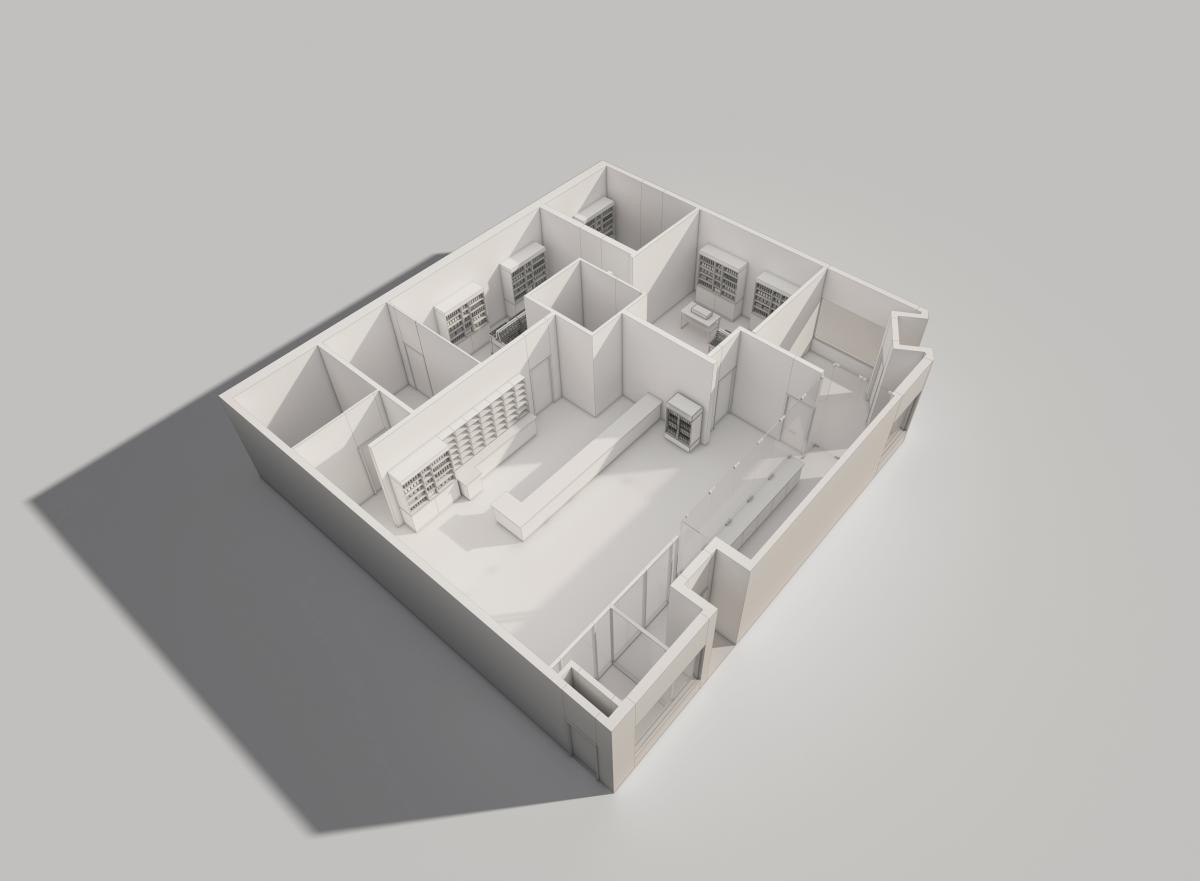 A draft rendering of the building's interior. These images have not yet been submitted to or reviewed by the City of Boston and the Cannabis Control Commission, Virga notes, but would give neighbors a sense of their plans.

For the most part, those who spoke up at the meeting were against the project. Bob Haas, with the Uphams Corner West Side Neighborhood Association, said he would “have to oppose it for the mere fact that it could clog up traffic,” a sentiment echoed by others who pointed to existing gridlock at the Hancock Street and Columbia Road intersection.

Virga said his new plan for reservations through a phone application would help the company better manage and review the flow of customer traffic. They would insist that anyone who came in to make a reservation in person park in a nearby municipal lot, suggesting that they patronize local businesses nearby while they wait.

Several at the meeting made derisive comments about Virga living in Duxbury, insisting that he was trying to force the shop onto a community that would not push back against it. They also noted the proximity to the Bird Street Community Center and a nearby sober home.

“We already have a police station on Hancock and we had four murders within the last two years, so more police presence is not going to make Hancock safer,” said Domingos DaRosa, a Hyde Park resident and former city council at-large candidate. “Bringing this dispensary to Hancock is not going to make the neighborhood safer.”

Virga and Marut work at Bridgestone Properties on Columbia Road, just down the way from their proposed shop site. While hemmed in by regulations like the requirement for half-mile buffer zones between approved cannabis locations and 500-foot buffers from places where children primarily congregate and the pressure of an the real estate market, Virga said they were not trying to edge into a vulnerable neighborhood.

Attendees wrestled with the notion of Uphams Corner as a place both historically ignored and on the verge of transformation with a city revitalization project under way in the area. They said that a pot shop would perpetuate a drug problem and simultaneously contribute to raising rents and property values that would displace residents.

His remarks were cut off by a swell of scoffs. 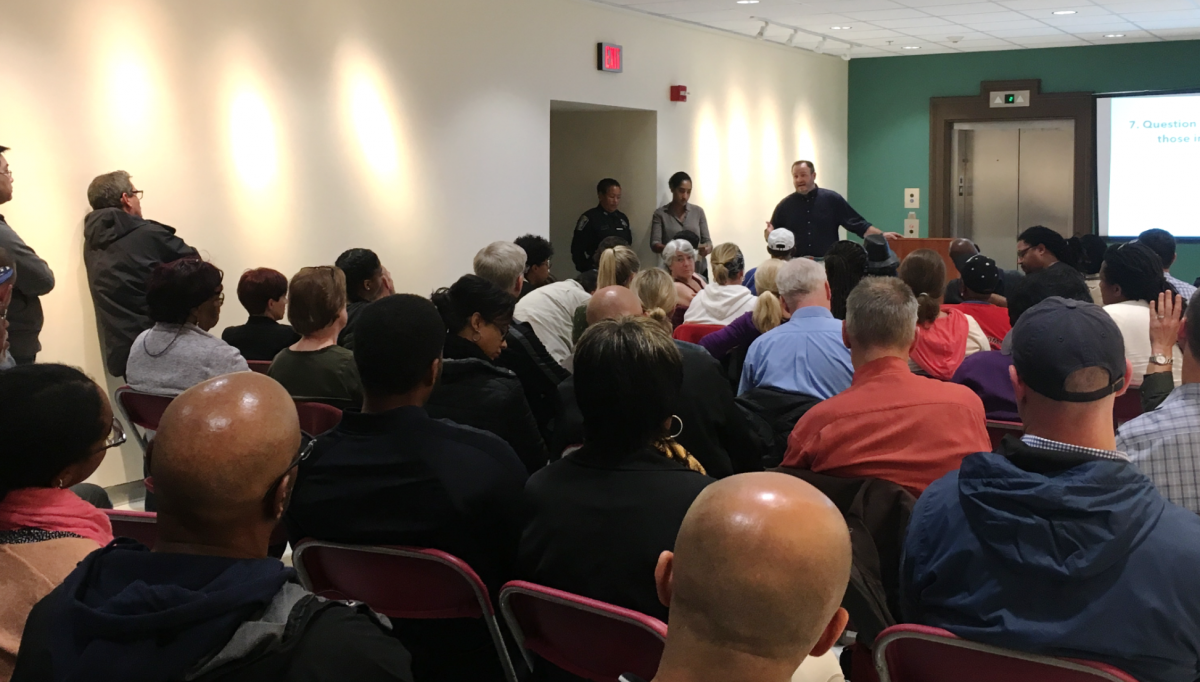 The loud stridency of the plan’s opponents drowned out the voices of those trying to speak in support of Virga and the shop, like 35-year resident Nancy Conrad, whose comments were met with jeers and sarcastic shouts so loud that the city moderator felt a need to repeatedly remind attendees to be respectful.

After expressing her feelings about the building at the site today – “it’s horrid, it has been that way, and it’s a trash dump” – Conrad said of the owners’ proposal for a new building, “Your rendering, it just beautifies it enormously. I think it would be a wonderful addition to the image of our community. And it doesn’t seem to me that you will have that many people, I don't think you’ll have that much traffic.”

The president of the Jones Hill civic group, Bridget Curd, did not even see the point of trying to speak up in the meeting.

“It was painful; I just think it went to a certain level,” she told the Reporter on Tuesday. “I think we could have calmly had open conversations and heard a little bit more about what the vision was as opposed to accusing him of…” she trailed off. “There was blood,” she said. “It was the opposite of the planning meeting we had where I had a clearer vision of what it would look like.”

Virga is proposing what he described as something akin to a craft beer and wine shop: Customers know what they want, what specific strains of cannabis they are looking for. They are willing to pay more for the regulated product, enjoy it recreationally, and are not going to be consuming it nearby.

He was clear on Tuesday that there would be no consumption component to the shop, even if the law did change to permit cannabis cafes in the future.

The shop sounds like something to consider to Curd, whose group will hear a new presentation on the project on Oct. 10 and vote on Nov. 14.

“I like his concept,” she said. “At least, I’m hearing what I would like to see from it. I’m not going to be foolish and think for the first six months we aren't going to have a flush of people... but I do believe that a lot of his business will be online and delivery, around 50 percent. Again, if you look at the outside of Cataloni’s, it’s an empty vacant eyesore, and if we had a business that brought foot traffic, it would just spread the wealth.”