In her first one-one-one interview since her historic victory, Ayanna Pressley reflects on the highs and lows of the campaign and how she sought to ‘change the math.’ Listen to excerpts from the interview at WBUR.

“I was working to win, but I was prepared to lose,” said Boston City Councillor Ayanna Pressley, who reflected on her historic election victory in an exclusive interview today with the Dorchester Reporter.

“But it wasn't because I didn't believe in our message or the strength of this movement we were building," she said. "I had confidence in all of those things, but because I wasn't new to this, I wasn't in denial about the many barriers and obstacles that lay in our path.”

Like Massachusetts and the nation, Pressley is still absorbing the scope and implications of her thunder-clap win over 10-term incumbent Michael Capuano on Tuesday in the Massachusetts 7th Congressional district.

The 44-year-old Democratic nominee and presumptive congresswoman says she got some rest over the last 36 hours and is now making calls to families, friends, and supporters and taking supportive calls from everyone from senators Cory Booker and Kamala Harris, Hillary Clinton‚ the presidential candidate for whom she stumped— to her former boss US Sen. John Kerry.

Her ground game and message led to a landslide victory over Capuano, by about 18 points in the district as a whole and a dominant 28 percent in Boston. Across the 7th district and connected counties, many of which also saw new and diverse leadership after closely watched elections, turnout far outperformed past state primaries. More than 100,000 voters showed up in Boston alone.

With a post-election Democratic unity event and a day of much needed rest under her belt, Pressley sat down with the Reporter in her Jamaica Plain headquarters, her first one-on-one interview since the big upset.

"I felt then [right after winning] what I feel now," she said, "which is a tremendous responsibility for those whose hope we have restored, or for those for whom we have provided hope for the first time, that I do everything to keep it."

Pressley is a Dorchester resident and a seasoned Boston politician, elected in 2009 as the first woman of color on the Boston City Council and now facing the prospect of being the first person of color to represent the state in the US House of Representatives.

Like in her earliest council race, and the one in 2011 where she topped the ticket for the first of three consecutive runs, Pressley said she met a skeptical political environment this year. Fellow at-large city councillors Michelle Wu and Annissa Essaibi-George, along with Attorney General Maura Healey, were in her corner, but Pressley faced an largely united political establishment with the likes of Mayor Martin Walsh, former Gov. Deval Patrick, US Rep. Joe Kennedy III, and even civil rights icon Rep. John Lewis endorsing Capuano.

“Over and over again, pundits, naysayers have questioned the legitimacy, the viability, the longevity of me based on everything I represent and embody, the issues that I champion, how I do this work,” she said.

She later added: “I think in every race and, especially the ones where they didn't think I'd get elected at all, and then they thought I'd be one and done, what has kept me always grounded is the work, and that has anchored me and that has emboldened me.” 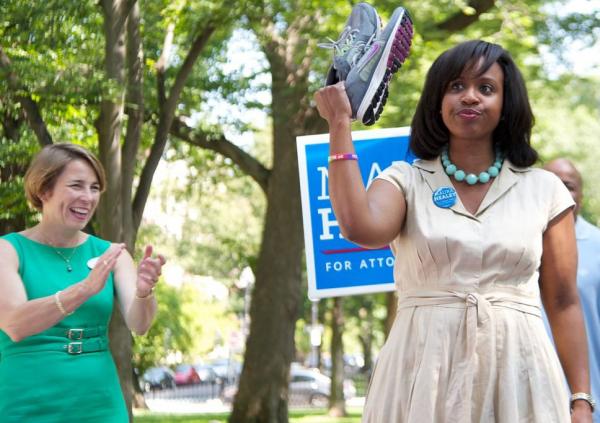 Councillor Pressley, right, is shown during an event in which she endorsed Maura Healey for state's Attorney General. Healey was one of Pressley's most prominent supporters in her race this year. Healey campaign photo

She ran against and defeated a well-regarded progressive incumbent, which presented a challenge from the very beginning, Pressley said.

After announcing in January, “suddenly it just seemed like we were putting one foot in front of the other and it was go-time,” she said. “And in those early days, I recall a lot of conversations with people that just didn’t see this as viable, just didn’t see my candidacy as a viable one, and would hope I’d look at other things.”

Former state Sen. Linda Dorcena Forry had just retired, for instance, Pressley noted, leaving an open seat. “People supported the idea of me running for higher ballot, but were not sold on this particular office,” she said, “and certainly not at this time.”

The Pressley campaign took a hefty boots-on-the-ground approach to driving out voters who often do not show up for primaries, especially in safe progressive districts. They focused on undecided voters, young voters, voters of color. They reached out on ethnic media, used a doors-and-phones centered turnout approach, and relied on the built-in interest her candidacy generated to reach those taking in news from mainstream outlets. She was working with lower name recognition outside of Boston at first -- though not high unfavorables -- but closed those gaps come election day.

“In this race we knew we would have to rewrite the primary conventional wisdom in math about who is a primary voter,” Pressley said. “And we did that, not for the purposes of winning an election, but we did it because as a value, it matters to me and my team that people feel seen and heard and that they have a seat at the table of democracy. So, for that reason, I felt even if we lost in the official sense, we would've still won.”

In a unity breakfast the day before, Pressley and fellow Democrats rallied together and applauded the signal that voters sent Tuesday— they wanted change, diverse leadership, and they would show up to get it. 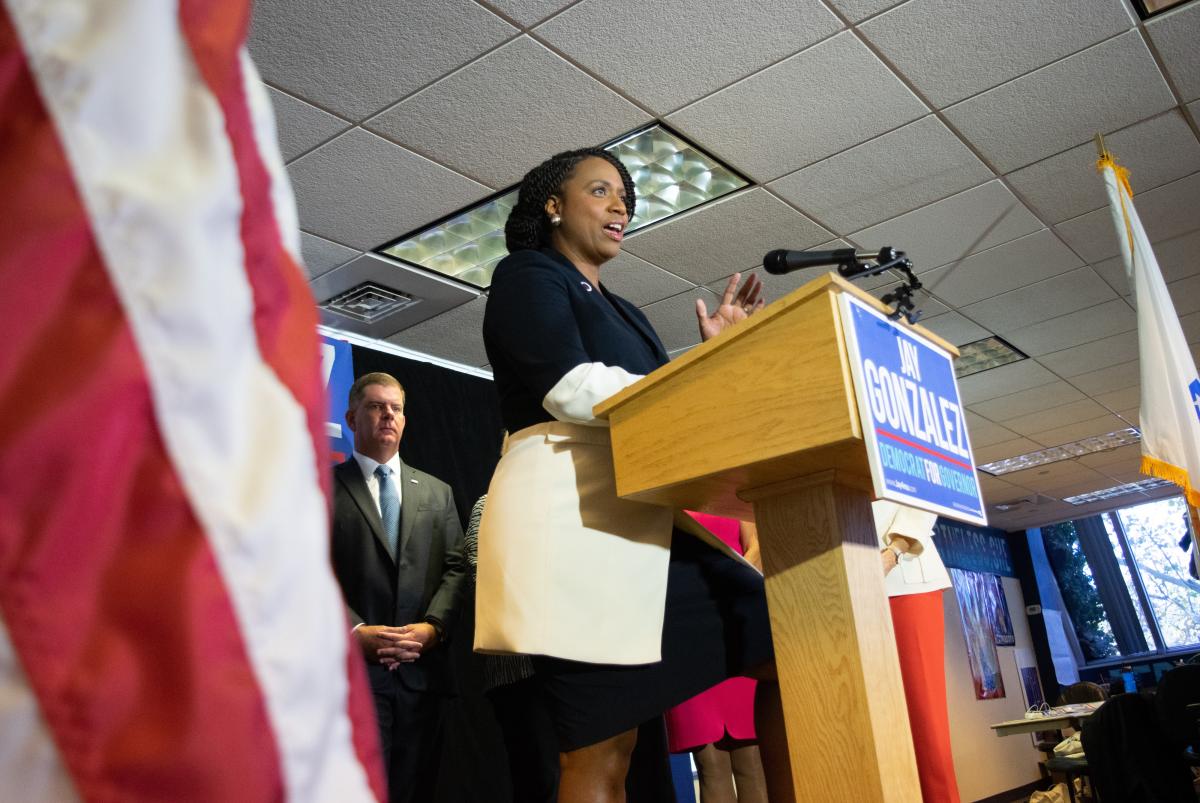 The day after her victory, Pressley joined other Democratic leaders at a unity event in Dorchester. State House News Service photo by Chris Triunfo

Pressley hopes another thing does not escape the party’s attention: She is ready to be a voice of resistance to the Trump agenda, she said, but “we do not have to put our aspiration and our hope on a shelf because we're in the minority.”

“One of the things is that I want to make very clear is that our victory was less a referendum against hate and more a mandate for hope,” she said. “That's what I hope the takeaway is. Because as I said, throughout the campaign, this had to be about more than just fighting Trump, this had be about aspiration and vision and a plan for this district to address these disparate outcomes which existed long before he was there, some of which were passed when we were in the majority and had a Democratic president and a Democratic majority in Congress.”

That she was running as a black woman in Boston came with challenges — expected ones.

“It was nothing that surprised me or that I wasn't prepared for, because I've been at this for a long time,” she said. “What hurt me is that the play of identity politics, that frame or that charge is a predictable GOP play that is straight from their handbook, and not one that I expected from Democrats and people that consider themselves to be progressive. Obviously, I'm black and a woman and unapologetically proud to be both. I have a lot to contribute that transcends my race and my gender. And so it was very painful that some would discredit or marginalize what my contributions have been to the city, my sacrifices and contributions to our party.”

The dynamics led to some awkward moments, Pressley said, including one notably uncomfortable one on election eve at the Greater Boston Labor Council, where she sat among scores of union leaders, many of whom were openly supporting her opponent.

“The Labor Day breakfast in particular was a very hard day,” she said. “I just made a decision that I would work very hard internally to sit in the space of asset and not deficit,” she said. “And at that Labor Day breakfast I had with me the International Brotherhood of Electrical Workers 103, Unite Here Local 26 and SEIU 32BJ and a host of other members [of trade] unions [who] publicly went a different direction, but wanted to let me know that I had their support. 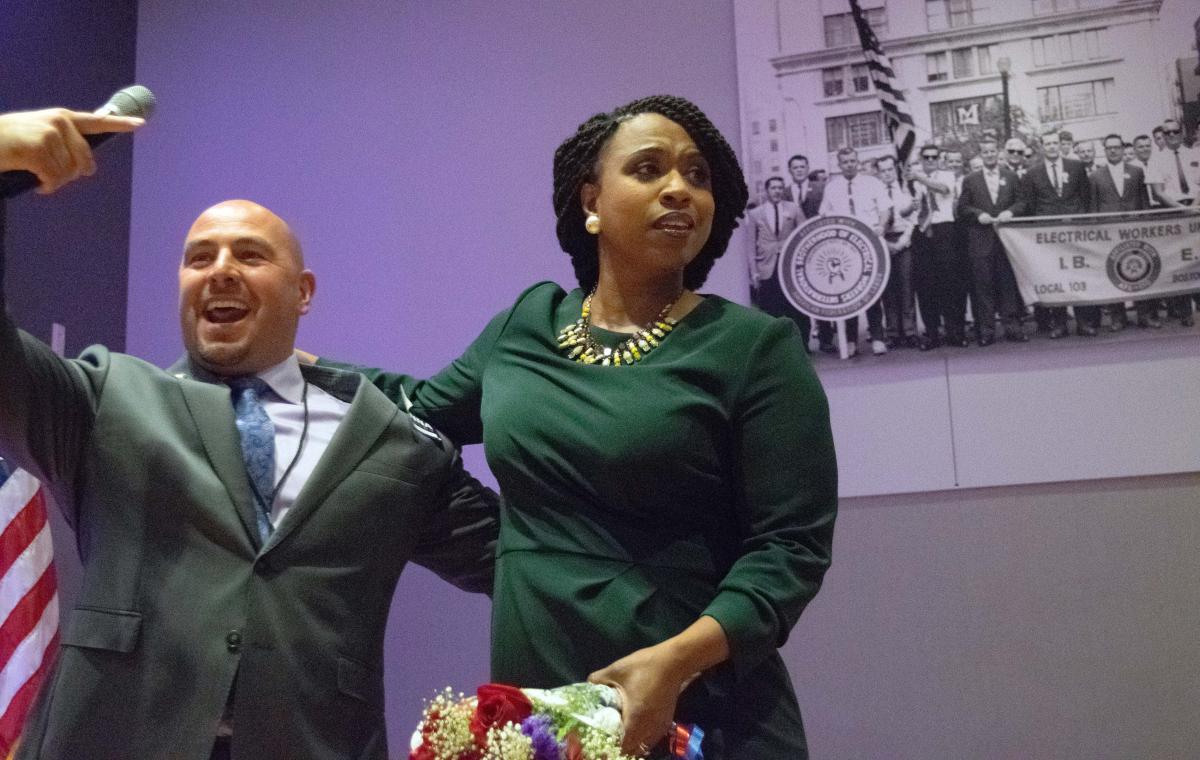 “So, I really just tried to sit in that. But I can't pretend that I didn't leave there feeling dispirited and defeated and worried. And I gave myself about an hour and a half pity party, and then I got over it because I went back to the work.”

Some of those priorities on the city level are still on her plate for the next year, and before former state Rep. Althea Garrison slides into her vacated fourth at-large council seat to replace her based on ballot order in 2017.

Liquor license reform, a push that remains one of her highest profile causes, still has another round of licenses pending a final vote.

“I mean the good thing is the work is in the same wheelhouse,” she said, “because the liquor license reform work, that is about addressing economic inequalities in wealth and ensuring every neighborhood has an equity and opportunity to build community, and to build wealth in the form of a neighborhood restaurant. These are really critical, walkable amenities to quality of life and economic and main street vitality and vibrancy… and so those are the same reasons why I ran for Congress.”

At the top of her mind on the national front is continuing conversations with her national colleagues on criminal justice reform, gun violence prevention -- “That will likely be at the top of my list.” -- healthcare access, reproductive justice and freedom, “doing everything possible to stop [Supreme Court nominee Brett] Kavanaugh from becoming a reality.”

But she feels like she is in good shape to tackle the federal fight. Barefoot in her offices, sipping purple Gatorade and munching on trail mix, wearing a colorful blazer, Pressley sounded assured about her mandate from the voters.

“I don't have to contrive anything,” she said. “I get to go back to my equity agenda, which we worked in partnership with community to develop. And now to just flip those pages and say, okay, what's the low hanging fruit? What can we immediately get to work on?

“But before I could even get to that, we have to get through November. I have to shut down my council office, I need to build the transition team and start to hire a team in Washington that will help me to actualize this equity agenda and to make good on the promises that I've made to the electorate.”