While canvassing through a Roslindale neighborhood, Alejandra St. Guillen, left, listens to resident Radrigunda Marmanillo speak about issues in the area.

The makeup of the Boston City Council has changed dramatically in recent years, as the 13-member political body once dominated by white men now includes six women of color. But in a city where nearly one in five residents is a Latino, there hasn’t been a Latino member on the council since Felix G. Arroyo stepped down to join the Walsh administration in 2013.

As next Tuesday’s preliminary election approaches, four Latino candidates, including Arroyo’s younger brother, are vying for seats, and some observers are saying the city could see its first majority-minority council.

Ricardo Arroyo, 31, who is running to represent Hyde Park, where he was born and raised, and the rest of District 5, which includes Mattapan, says Latinos have been lacking a seat at the table on crucial issues, and voters are hungry to get that seat back.

Six women of color now serve alongside seven white men on the council, but with three of the males deciding against running again, the makeup is likely to change even more.

Julia Mejia is among 15 candidates running for one of the four at-large seats. She paints herself as the grassroots choice among more establishment candidates. “I’m the first in my family to graduate high school and college, buy a house, and get my mom out of Section 8 [housing],” she told a neighbor while out canvassing on a recent afternoon.

Mejia runs Collaborative Parent Leadership Action Network, an advocacy group dedicated to equity in the school system. Born in the Dominican Republic, she came to the US when she was five, and she was raised by a single mother who was once undocumented.

Mejia, 49, and Alejandra St. Guillen, 42, are running to become the first Latinas in the council’s two-century history.

St. Guillen, born and raised in Mission Hill and now a resident of West Roxbury, is also hoping to become the first openly gay woman on the council. She served under Mayor Martin Walsh as director of the Office of Immigrant Advancement. Compared to Mejia, St. Guillen is an insider — with the endorsements of Walsh and well-known Councilor Michelle Wu — and so far she’s raised nearly 50 percent more than Mejia — $126,000 compared with $88,000, according to campaign finance records. 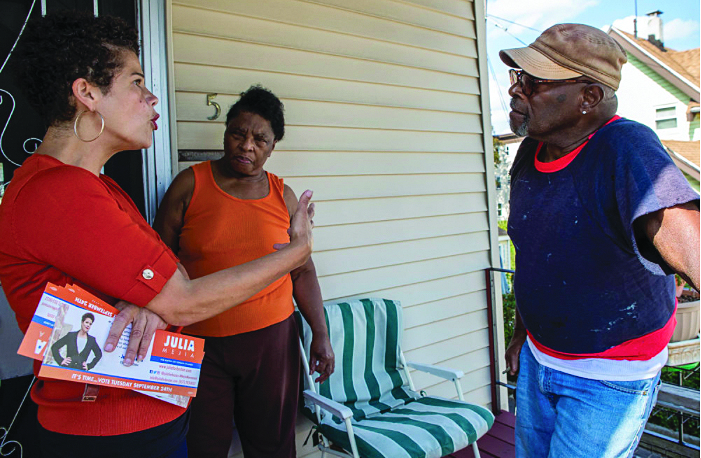 St. Guillen says she feels like she’s part of a progressive wave in the city’s leadership, and the wave could go even bigger. The at-large seat is “a great opportunity for me to continue my work in education and immigrant rights and housing affordability,” she said, “and do it on a different scale, and do it in a place where there is a growing ... progressive movement.”

Fifteen candidates for at-large councilor — including the four incumbents — are on the preliminary election ballot. Only eight will make it to the final election in November to compete for at-large seats.

The third Latino running at-large is Mattapan native Herb Lozano. He says voters he’s talked to are disillusioned with politics because of the lack of representation. “That’s actually something that I’ve put in front of folks ... especially men of color, is to let them know that there are no men of color on the City Council,” Lozano said. “So I think I’m bringing that diversity as someone who identifies as a Latino [and] as an African American.”

The council race is a challenge to the inequity Latinos face in local leadership positions. According to the Boston Foundation, Latinos hold 12 percent of occupations in the region, but account for just about 1 percent of legislators and CEOs.

Larry DiCara, who was on the council in the 1970s and ‘80s, says it’s unlikely every one of the Latinos running this year will win, but he says recent elections have upended some longstanding trends, meaning anything is possible. While turnout has traditionally been highest in places like South Boston, Eest Roxbury, and Dorchester, DiCara says it was higher in the last municipal election in Roslindale and Jamaica Plain.

“It’s a very different Boston than it was when I was running for public office decades ago,” DiCara said. “The city is much more diverse and lots of people who identify as white are not native Bostonians. Certainly in 2018 those folks showed up and voted.”

Political strategist and WBUR analyst Wilnelia Rivera ran Ayanna Pressley’s successful move from Boston city councillor to US congresswoman, and she’s now in charge of St. Guillen’s bid. According to Rivera, Pressley’s primary election saw a 58 percent increase in turnout over the 2014 primary, and now Rivera wants to know whether the increase can be sustained.

Rivera says she doesn’t expect to see a much higher turnout than in previous non-mayoral elections; she’s expecting just 10 percent-12 percent of registered Latino voters to vote. So while the council could very likely have a people of color majority when the votes are counted in November, Rivera says that still isn’t reflected among voters.

“How do we create a multiracial party that’s actually multiracial, because you need turnout to look that way,” she said. “It’s not about who’s in the party; it’s about who’s voting.”

Former Rep. Jeffrey Sanchez was the state’s highest ranking Latino legislator until he was unseated in 2018. He says when he worked under Mayor Tom Menino as a recent college grad, there was a sense that Latinos were finally staking their claim in politics. But now, Sanchez says something more fundamental has changed — Boston is majority people of color, and its elected officials are starting to reflect that.

“The new pioneers have arrived,” Sanchez said. “The city has come a long way from when I was a kid growing up in Mission Hill,” he added. “Before we weren’t even [considered] Hispanic, we were Spanish … because everybody attributed our ethnicity and our culture to language.”

Now, he said, Latinos from nearly ever Latin American country can be found in nearly every corner of the city. “And Latinos are finally finding their voice and their place.”