When Tambo Barrow took a “leap of faith” and opened up a gourmet burger joint, Bred, in Lower Mills nearly five years ago, the burden of owning and operating a restaurant full-time was overwhelming at times.

“I sometimes have nightmares about the times when I first opened up and it was just me and a couple of people, and I’d literally be here at seven o’clock [a.m.], leave here at eleven o’clock or midnight sometimes, and then have to come back here at five or six o’clock,” he said.

“One time I was driving home and I was so tired that I got in the driveway and then fell asleep in my car. My mom came knocking on the window to wake me up.”

Fast forward five years, and the 32-year-old Barrow says he has finally achieved a “work/life/home balance” that has allowed him to translate his labor of love into success.

“There’s definitely been a lot of trial and error, because I have no culinary background,” he told the Reporter. “A lot of people thought I was crazy, telling me restaurants don’t last past the first year, stuff like that...It’s been a lot of work, a lot of long nights, early mornings. But I’ve started to find balance in creating routine and, you know, just like a workspace that works for me.”

Getting a helping hand from his family has helped Barrow to share that burden of running a restaurant; his father has assisted with construction, renovation, and maintenance work, while his fiancée has chipped in with cashiering and other odd jobs around the eatery. And Barrow’s mother, a nutritionist at Whittier Street Health Center, played a role in shaping his relationship with food from a young age, he said.

“She was a strong influence behind serving quality food,” he said. “Growing up in Mattapan there weren’t that many options. If you wanted to get a burger, you had to go to McDonalds or Burger King or one of those places where the food is just, you don’t even know what you’re eating. She was a big influence on me taking pride in creating a product that customers feel great about eating, not only because it’s local but also because you put a lot of care and thought into the food that we put on the menu.” 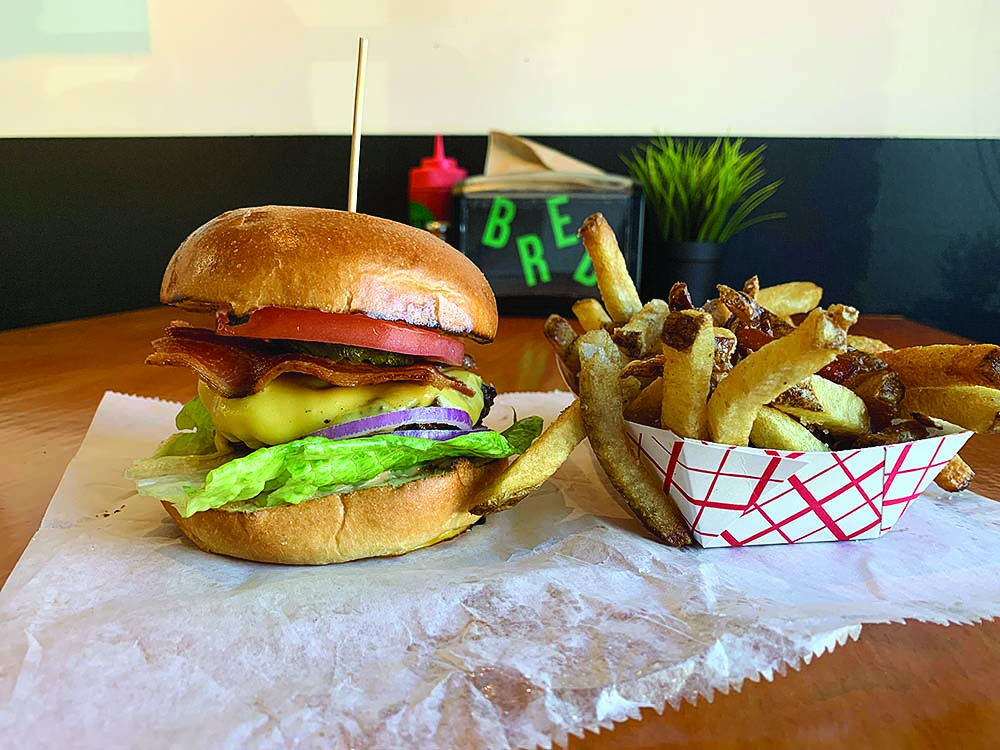 That level of care is evident in Bred’s grass-fed beef patties, fresh produce, and overall taste. The establishment’s classic burger, priced at $9.99, bests most gastropub burgers around town that go for more. But the main thing that sets Bred apart is its creative menu, which has Barrow’s fingerprints all over.

Jerk chicken sandwiches, house-made jerk salmon patties, and plantains — nods to Barrow’s Trinidadian and Bajan roots — offer customers flavors not found at your typical upscale burger joint. And there is no shortage of healthy options either, with salads, fruit and vegetable smoothies, and even a side of asparagus on the menu.

In anticipation of Bred’s five-year anniversary in early January, Barrow is revamping the menu, replacing around 70 percent of the sandwiches with new creations, including a “pretty crazy concept” that he has opted to keep under wraps but expects will generate a lot of interest.

Such a menu redesign takes a lot of time, said Barrow, but it also gives him a chance to express his creativity through new recipes.

“I’ve always taken pride in trying to select the food that’s here,” he said. “I haven’t had a chef background or anything but I have been a consumer for a long time, and I know what I like, I know what things go well together.”

As any local who has tried one of Barrow’s burgers would agree, Bred and Lower Mills go well together, too.

Daniel Sheehan is the Arts and Features Editor for the Dorchester Reporter.