In the closing weeks of last year, Boston Collegiate Charter School celebrated its 20th anniversary in style by unveiling a series of renovations to its upper level campus on Mayhew Street in Dorchester’s Polish Triangle. A newly completed “cafetorium” and a slew of revamped classrooms were the primary changes in a cosmetic facelift to the building, but there are other, more fundamental reasons why the school looks different now from how it looked 20 years ago.

Originally founded in South Boston in 1998 as South Boston Harbor Academy, the school moved to Dorchester in 2004, a move to a new home that coincided with a noticeable shift in classroom demographics: The previously largely white student population is now considered among the most integrated in the city as the school continues to draw in applicants from all over the city, but particularly from its home neighborhood.

“We have a near even split between white and students of color, which is very rare in Boston,” said Shannah Varón, the school’s executive director, who led the Reporter on a tour of the campus last month as construction was finishing up. “A lot are from Dorchester, the most diverse piece of Boston,” she added, giving a figure of about 46 percent.

Indeed, Boston Collegiate boasts one of the most diverse student populations in the city, a result in part of the admissions process, a random public lottery that attracts kids from every neighborhood in Boston. As of last month, more than 1,700 individual students were on the waiting list.

While the high school campus had enough space for such an increase in enrollment, Varón said, it lacked certain key components that all high schools should have, like a cafeteria or an auditorium. “We had no place to have assemblies or a cafeteria,” she said. “Students have just been eating in their classrooms.”

Hence the need for the school’s revamp, which has resulted in a new 2,750-square foot “cafetorium” and a 9,300-square foot addition where old classrooms and offices were rehabbed and four new science labs were installed. 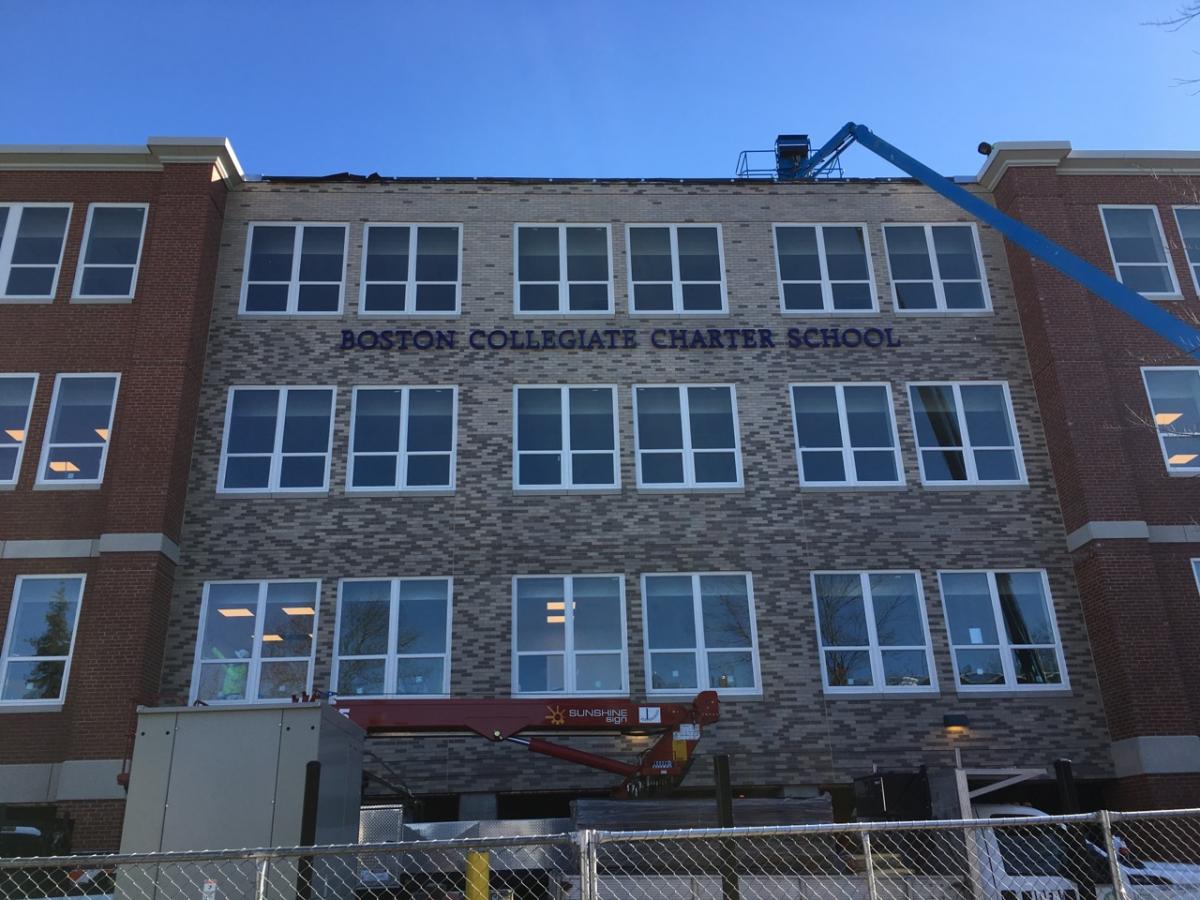 Varón, who has been at the helm of the school since 2011, does not count herself among the longest tenured staff members at Boston Collegiate. The school prides itself on its teachers – one of its motto reads “without great teachers, nothing else matters” – and the long tenures of its staff.

On a tour of the facilities, we ran into several so-called “pillars” of the school. “We celebrate our people who have been here for ten years by calling them ‘pillars,’” explained Varón. “We’re known for teacher and staff retention, which is not something all schools can say. Having teachers stay for 20 years or 10 years or what have you is very meaningful to us. That longevity goes a long way in creating stability and enduring models of success,” she added.

Pillars are everywhere on the BCCS faculty. Jim White, a twelfth grade science teacher, has been at the school since 1999. Jenna Ogundipe, the school’s chief academic officer, has been on staff for 16 years. Current high school principal Sarah Morland started as a science teacher in 2003.

In noting that the ability of teachers to build relationships with kids is often undervalued, Varón said, “we see that as the primary driver of academic achievement; kids are willing to work for certain teachers.” She offered Maureen O’Hern, an 11-year BCCS veteran and History Department chair, as an example. “The kids are like ‘she’s so hard’ –but they love it! When they come back from college, they say, ‘Oh, I have friends who are complaining about writing three-page papers. I used to write ten-page papers in a night for Ms. O’Hern.’ It matters.”

Preparing kids for college matters a lot at Boston Collegiate, and getting them accepted is a central mission of everyone at the school. Since the class of 2004, BCCS graduates have posted 100 percent college acceptance results, and more than 80 percent of those graduates are either currently enrolled in, or have graduated from, places like Amherst, BC, Dartmouth, Middlebury, and every school in the UMass system. 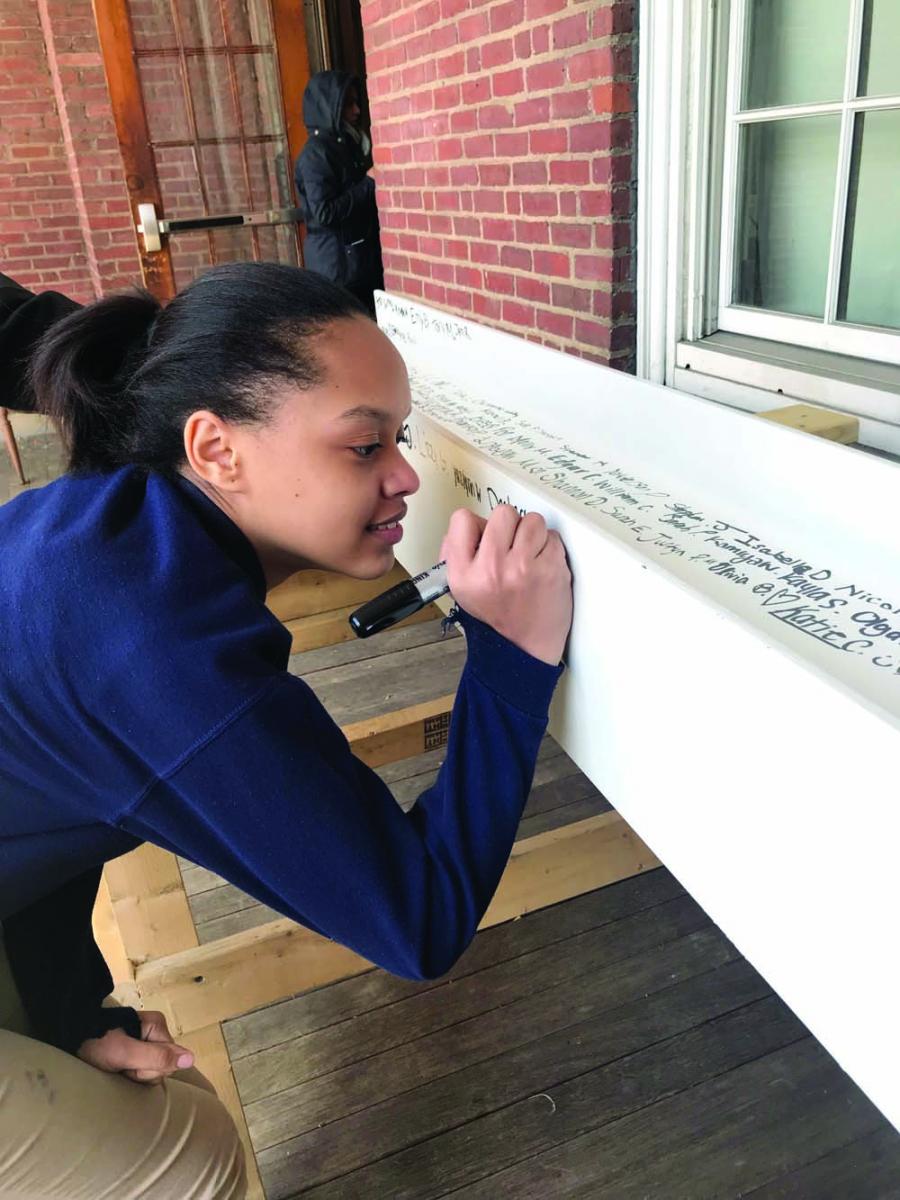 BCCS student Dashary Guerrero signs a beam that now hangs above the entrance to the new cafetorium.

But that mission doesn’t end the day students get a BCCS diploma. Varón recalled one student who was struggling at Holy Cross and on the verge of dropping out. Boston Collegiate’s director of alumni programming drove to Worcester to have dinner and help the student restructure the schedule. Eventually, the student received a degree from Holy Cross, she said.

That type of success story is seen as rare for schools as socioeconomically inclusive as BCCS; college persistence for individuals from low-income communities nationwide is below 10 percent.

“In addition to being so focused on students getting into college, we’re focused on getting them through college,” said Varón. “It’s about getting the right fit, but it’s also about keeping track of the kids who are in college and how they’re faring...part of what’s special about this place is the small, close knit community between students and between staff and students.”

For Varón, having a community that is at once diverse and tightly knit makes sense in Dorchester. Diversity allows the students to celebrate their differences while at the same time recognizing the ways in which they are the same.

Each month, students acknowledge a different cultural heritage. December is the school’s Polish Heritage Month, and one day pierogies were brought in from nearby DJ’s Polish Deli for students to sample. “One kid asked if it was like an empanada,” said Varón. “We said, ‘Yeah, it’s like an empanada! But Polish.’”