The proponents of the Neponset Wharf development plan in Port Norfolk returned to the community last week to present an amended plan that would fortify the shoreline and see three condominium buildings and a boathouse built along the peninsula’s waterfront.

The revised proposal— unveiled in front of about 40 neighbors inside the Boston Winery— is the latest iteration from South Boston-based City Point Capital, which intends to acquire and raze the MarineMax/Russo Marine site at 24 Ericsson St.

Tim Czerwienski, a project manager for the Boston Planning and Development Agency (BPDA) who facilitated the meeting, told residents that he had asked City Point to clearly outline community benefits, alternative development options for the site, and specify resiliency measures.

“There’s a log jam here that needs to be broken, whether it’s traction on the project as is, or exploring an alternative. We want to start the conversation and get moving because the land-owner is interested in developing,” said Czerwienski.

“This is a very vulnerable spot, and it has the opportunity to do some good things for the neighborhood in terms of leveraging private investments. So, we want to see something start to move,” he added.

Earlier versions of the project have been met with general opposition from Port Norfolk residents. In the past, much of the consternation over the project has hinged on traffic issues, too-tall buildings, and the absence of a plan to protect the neighborhood from flooding.

But at last week’s session, more than a few residents voiced their support for the revised plan, which includes 85 condo units (generally consisting of two-bedroom units), 183 parking spaces, renovated boat storage and service facilities (that would also include additional seasonal parking,) a small bait shop, and, possibly, a coffee shop. Eleven of the condo units would be deed-restricted by the city as affordable housing entities.

Three residential buildings, referred to by Kevin Deabler of RODE Architects as buildings A, B and C, have undergone significant design changes that have over time reduced the density of the project by about 50 percent.

Building A, which lies closest to the neighborhood setting, would be split between four and five stories with 37 residential units and internal parking. Buildings B and C would both rise to five stories of 34 units each. The new one-story boathouse might not require a complete demolition of the existing boathouse, said City Point Capital’s Ryan Sillery.

The architectural firm is “hoping to be sensitive to the characteristics of Port Norfolk,” said Deabler, in a way that honors the old, industrial, brick-building feeling of the neighborhood yet “is looking forward and blending those two goals.”

Deabler said that the 156,816 square-foot property would include a public harbor walk wrapping around the waterfront, a public pathway from the development’s entrance out to a public pier, shoreline improvements, and open access to the water.

“We’ve been able to come up with a plan that meets all of the guidelines of resiliency that are continued to be worked out by the city,” he said, adding that the developers would include a shuttle service available to both residents of the condos and the rest of the neighborhood linking them to local MBTA services.

Other benefits he mentioned include an “enhanced” waterfront area, inclusionary housing, and the funding of a traffic study. 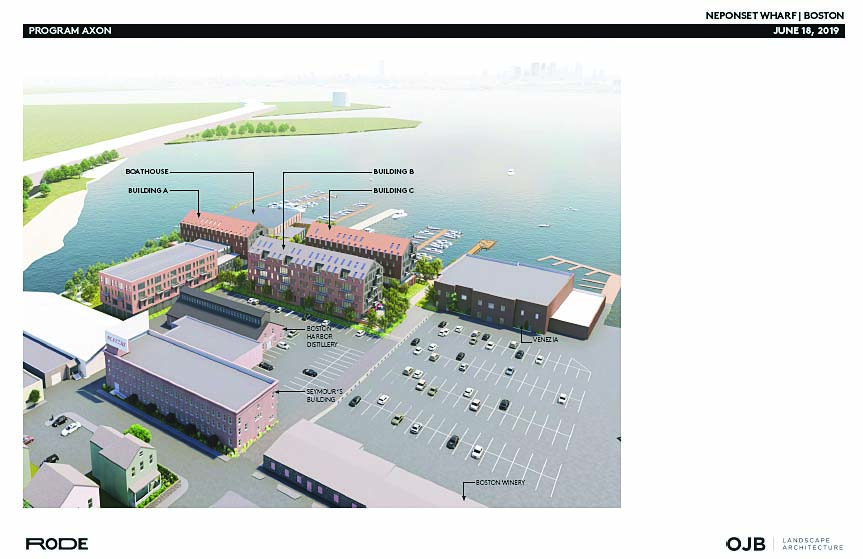 Jared Eigerman, an attorney for the proponents, went over alternative uses that might be viable for the site, including: an adult education center, offices, retail and/or manufacturing cannabis establishment, community/day care centers, private sports grounds, retail, and a research or biotech laboratory.

Virtually all of these alternative uses would not require the development team to create open space, obtain variance, or provide mitigation/public benefits.

Some residents said that they couldn’t see any upside to the project, while others announced their support of the plans as is.

“I’m for this project,” said resident Matthew Raffio. “At the end of the day, I think something needs to go there and the alternatives suck. By default, I think the benefits really outweigh the costs associated with the project.”

Others argued over an issue that has remained a constant threat strike against the proposal: concerns about rising sea levels.

“Why build in the flood plain?” asked longtime resident Maria Lyons. “It doesn’t make sense to build in the flood plain. As far as climate resiliency,” she said, “I’m still not convinced that the canals between the buildings won’t act as a water conductor when storm waters come into the neighborhood." A handful of other attendees residents echoed her concern.

Lyons referenced Chapter 91 of Massachusetts State Law, which regulates the protection and promotion of all public waterfront areas. She also referred to designations made by the state’s Area of Critical Environmental Concern (ACEC) program.

“I think the overall issue here is that it’s in an area of critical environmental concern. It’s in an area where the state has invested in trying to return it to a more natural environment. There’s a plan going back to the ‘60s for the river and this area. A large condo project is not part of that plan,” she said.

Lyons and others also noted that Climate Ready Dorchester, a city-led initiative aimed at creating guidelines for development and infrastructure along the coast, has just begun meetings this fall.

“The Climate Ready study is being done but it’s not even close to being finished,” said Lyons. “Yet the BPDA and the city are ready to hand out these permits. There is no vision. The city doesn’t have the vision and this doesn’t fit the state vision, and nobody seems to care.”

In his response, Czerwienski said: “The Article 80 development review process is designed specifically to give the city and the BPDA the nimbleness to be able to achieve citywide planning goals as they relate to climate change resilience, economic development, and housing production in places where there has not been widespread neighborhood planning.”

He added: “We have housing goals, we’re trying to build 69,000 units by 2030 to alleviate what is, quite frankly, a crisis-level affordability situation in the city. We have climate change goals. We are in a position where we need to leverage private development to fortify, soften, and protect the shoreline from sea-level rise.”

Stephanie Kruel, a senior environmental planner at civil VHB— a firm hired by the city to facilitate the Climate Ready Dorchester effort, explained that the project would need to go through review at the Boston Conservation Commission (BCC) as well.

“There are specific performance standards within areas that are under ACEC and in other wetland areas that the project would have to comply with,” she said. “The BCC will have the last word, and there’s no way that the project could be built without complying to [multiple] criteria.”

The room remained split throughout the presentation, with some residents showing support while others intermittingly shouted, “Why is this good for the Port?”

Longtime Port Norfolk resident Ed Roche said he saw some opportunities for improving the latest proposal.  He suggested, for example, that the team make the boathouse design more aesthetically pleasing.

“With all due respect,” he said while pointing to the boathouse. “I see that box there, and we talked about trying to make your buildings more sympatico with the original buildings in terms of scale and mass. I see a box. I have a hard time accepting that we’re only going to get one shot to do this and we have to get it right.” Replied Sillery: “We can definitely look at that.”

Ben Tankle, another longtime resident, spoke to his view of a historical lack of trust between neighborhoods and city development in terms of zoning changes, saying, “What I’m getting at is this: I’m worried about changing the zoning no matter what.”

Grady Eason, a Savin Hill resident and representative of Carpenters Local 327, supported the project as is. “[Sillery] has sat down with the union and he has committed to union labor. He’s not the big bad wolf,” said Eason. “I’m in support of this project.”

As the public meeting came to a close, there did not seem to be a clear path forward. “We’re still at a little bit of an impasse here,” said Czerwienski. “I’m going to take this back to the office, and I’ll let you know what the next steps are.”