A plan to build two residential towers at 75 Morrissey Blvd. (next to the old Globe building) has been scaled back in height. Image courtesy Stantec

The pair of residential towers that have been proposed for a site next to the old Boston Globe property on Morrissey Boulevard would be reduced in density and height in a revised plan shown to civic leaders at a meeting of the Columbia-Savin Hill Civic Association’s planning committee last Tuesday.

Center Court Partners, the owner of the 2.23-acre site, initially floated the idea of towers with 24 and 21 floors, respectively, about a year ago. The new plan for 75 Morrissey would lower the heights to 17 and 15 floors.

In June, they showed neighborhood leaders more advanced plans for the entire section of Morrissey that they control. Construction of the residential buildings would be the first in a multi-phase buildout of the land Center Court owns between that site and the Hub 25 buildings next to JFK/UMass station that would dramatically change the Dorchester skyline and add roughly 695 new housing units to the neighborhood.

Last week, David Raftery of Center Court explained that the changes to the project over the last year have been informed, in part, by meetings with other stakeholders in the neighborhood.

“A lot of what we think we can do to help bring life to and beautify the entire area is going to depend on partnerships with entities like the MBTA and DCR,” Raftery said. “We’ll have to play our role in getting that done. But we’re happy to show a design that we think works and we are happy to go out and advocate it as part of our project.” 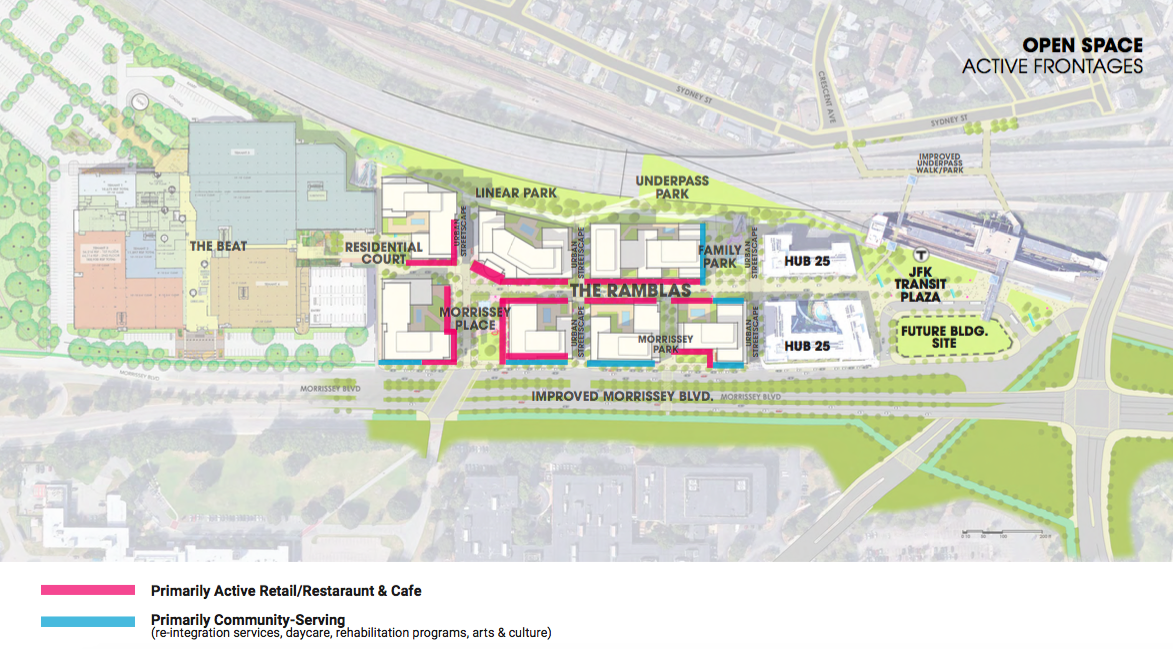 A rendering shows a new vision for the stretch of property on Morrissey Boulevard owned by Center Court. Image courtesy Stantec

Raftery said that Center Court has participated in meetings with nearby stakeholders like Boston College High School, Nordblom Co, the developer of The BEAT on the former Globe site, UMass Boston, the Corcoran Jennison Companies, and Accordia Partners, developers of the Bayside property, in looking at the “macro-picture’ of development in the area.

Some members of the civic group who spoke up at Tuesday’s meeting are still generally unhappy about the proposal, saying that the height of the towers would be completely out of step with the rest of Dorchester and that the number of units would drastically add to traffic issues along the boulevard.

Other residents countered that density like that of the Center Courts proposal was exactly what was envisioned and outlined in the Columbia Point Master Plan, a document published in 2011.

One element of the Center Court plan for the part of the Morrissey corridor that it controls between JFK-UMass station and the former WB56 property site is the construction of a new street that would connect the various properties.

“If this is a neighborhood, the most important thing to do is to connect it to other neighborhoods, and that’s not easy,” said David Dixon, vice president of planning and urban design at Santec, which is advising Center Court Partners.

“The first thing we need to do is make it a real street that people would want to use,” Dixon said. “We want to make sure that we have enough activity – density and housing – so that we can get retail along the street.” 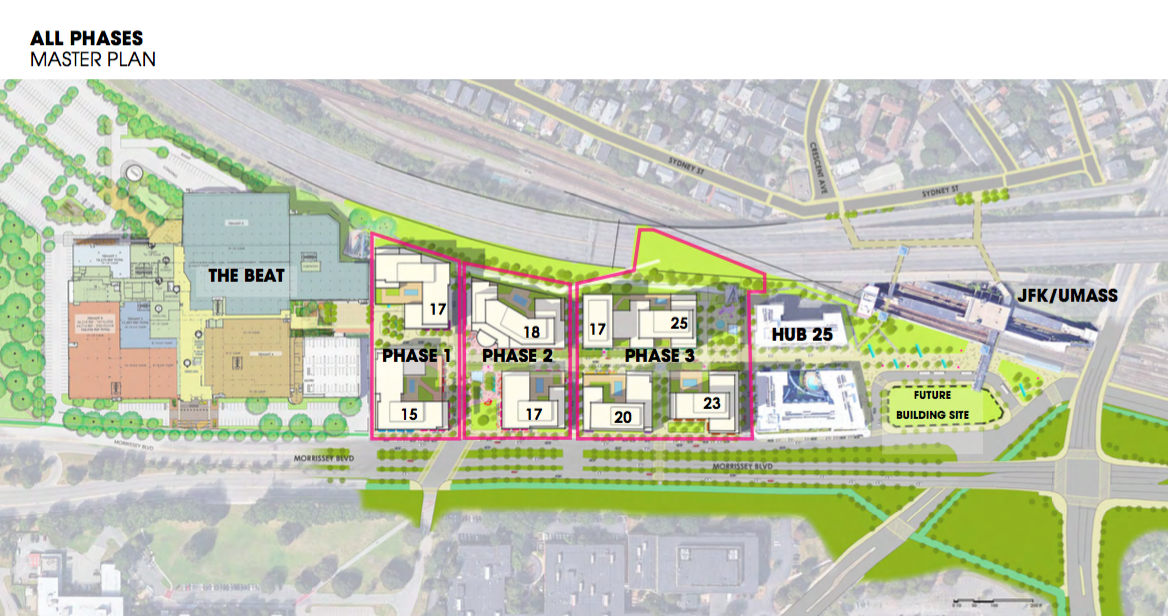 Buildout of the site would occur in three phases, according to Center Court Partners. Image courtesy Stantec

Association member Bruce Shatswell, of Sydney Street, liked the idea of connecting the Morrissey properties to the larger neighborhood.

“I’m going to suggest to you that there needs to be a political will in this, not just a project,” he said, “although I like the idea of connecting everything. Part of that might be starting with nomenclature— and it needs to be understood as Dorchester.”

He also said that the density of the development could make it hard for some to access the waterfront on the other side of Morrissey Boulevard.

“I’m glad to see a master plan here, but it needs to be coordinated all the way around. If they have a greenway downtown where the expressway was, we need a greenway in Dorchester that is public space and gives us access to the water.”

Center Court Partners purchased the 2.23-acre site at 75 Morrissey from the car dealer Herb Chambers in June 2017 for $14.5 million. The group also owns the Star Market parcel and the Beasley Media Group building.

Down the line, Center Court envisions four or five new buildings in phases two and three, accounting for 1,080 units of housing, 86,500 square feet of retail, including a 60,000-square foot market, and around 1,000 parking spaces. This vision sees an existing roadway in the middle of the Hub 25 site extended to and through the new project, creating a tree- and park-lined internal road to the east of the expressway.

Center Court’s lawyer, Dennis Quilty, said that the development team has not yet filed any plans with the Boston Planning and Development Agency (BPDA), but hopes to do so soon. The team will then meet again with the Columbia-Savin Hill planning group after assessing feedback.