A slide from today's UMass Board of Trustees presentation shows the Bayside site in the context of UMass Boston campus and the surrounding neighborhood.

A development team led by veteran Boston real estate executives and financiers Richard Galvin and Kirk Sykes has been selected by the University of Massachusetts to lead the redevelopment of the former Bayside Expo land on Dorchester’s Columbia Point in a deal that could yield the university as much as $235 million over time, according to sources familiar with the financials.

The UMass Board of Trustees voted unanimously to approve the recommendation made by a UMass Building Authority advisory group at a meeting held this morning in Boston. A final lease agreement with Accordia Partners will be negotiated and signed at a later date as the Galvin-Sykes team ramps up a “robust stakeholder and community input process” to plan out uses for the waterfront property.

The designation came after an extensive, 18-month bid process that narrowed a field of interested developers to a group of six and then two finalists. Sources close to the process say that the Galvin-Sykes bid was chosen because it offered the most solid financial plan for paying for a 99-year land lease. The group also brings to the table a diverse group of investors and includes the option of UMass Boston choosing to lease back part of the 20-acre site for its own future use. Their initial bid also includes $25 million in "infrastructure commitments," although its not yet clear which infrastructure would be targeted with these funds.

There is no concrete re-development plan in place yet at this stage of the process. The designated Galvin-Sykes team will take the lead in engaging the community in a planning process that will likely begin this year. But, officials who briefed the Reporter on the contents of their winning proposal this week say that it will include a mix of uses, including the potential for UMass to use part of the site.

UMass acquired the former Bayside Expo Center in 2010 for $18.7 million after its former owners forfeited the site in a foreclosure during the 2008-09 recession. The university has mainly used the waterfront land for parking for its Dorchester campus. The property was briefly included in the Boston 2024 proposal to bring the Olympic Summer Games to the city. When that bid was abandoned, Robert Kraft’s sports group began closed-door talks with UMass to lease the site and build a professional soccer stadium on the site. That plan was scuttled amid push-back from elected officials and abutters, who signaled opposition to the concept.

Early indications from the outline of this new arrangement with the Galvin-Sykes partners indicate that UMass will realize significantly more money in this transaction, while reserving the right to use some of the Bayside parcel for its own future use.

Galvin is the founder, president and CEO of CV Properties, LLC, which has “developed and acquired more than $4.5 million square feet of office and residential projects valued at $2.5 billion,” according to his company’s website. Recent projects in Boston include the D Street hotels next to the Massachusetts Convention and Exhibition Center in South Boston; and 451 D Street, a nine-story office building in South Boston.

Sykes is the senior vice president at New Boston Real Estate Investment Funds. The former chairman of the Federal Reserve Bank of Boston, he is president of Urban Strategy American Fund, L.P. which specialize in “the creation of urban mixed-use developments.”

State Senator Nick Collins, who had urged UMass officials to seek a wide range of proposals from the broader development community in 2017, said he was pleased with the new direction and the choice of developer.

"Today marks the next step in a process the community, elected and UMass officials worked hard to see launched," said Sen. Collins. "The open bid process for Bayside drove some great teams to compete for a chance to partner with UMass to create something special on Dorchester Bay."

Robert Griffin, the co-head of U.S. capital markets for Newmark Knight Frank— the commercial real estate firm hired by the UMass Building Authority to find an appropriate private partner for Bayside— said there was strong interest in the site. 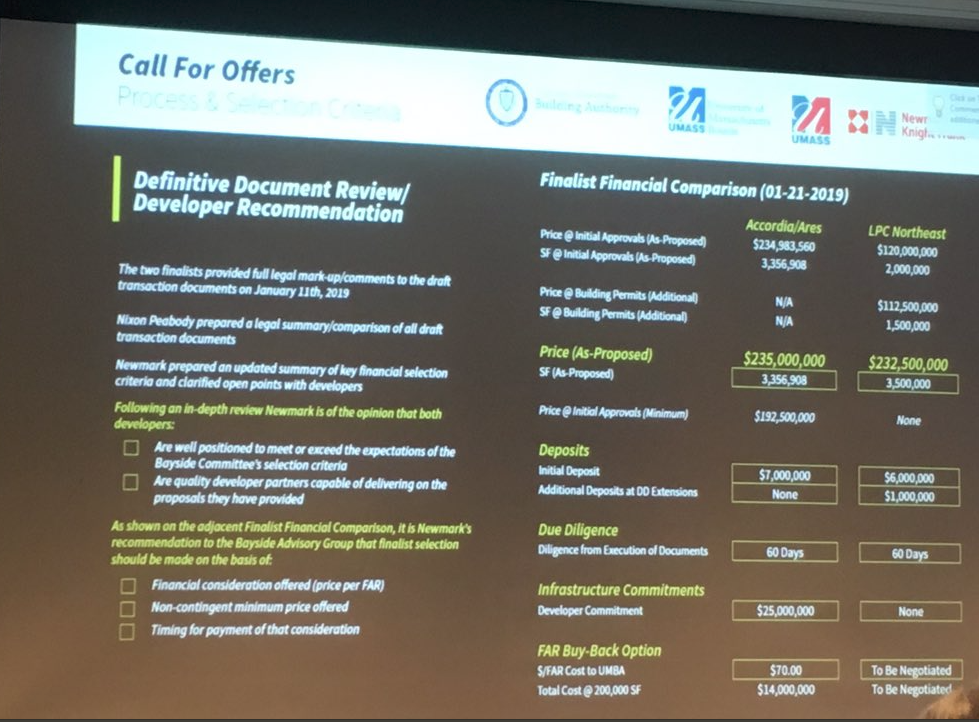 A slide shown to the UMass Board of Trustees on Thurs., Feb. 14 shows a comparison between final offers for the Bayside site. Jennifer Smith photo for the Reporter

“We had lots of people interested,” Griffin told the Reporter. “Most of the market saw this as sort of the next sort of Seaport, given the proximity to the Red Line, eight minutes to Kendall Square, a zero-vacancy market right now in lab and in office in Cambridge — and Longwood medical area, same thing.”

Griffin added: “At the end of the day, we had six very serious contenders and we got it down to two. Most people were focused on something that would be a credit to the neighborhood, a credit to the school, the community, hoping to have a plan that would attract the kind of talent that would provide jobs in the area. Jobs for the students at UMass, internships, and maybe something that would synergistic with the programs there, whether it be the wonderful nursing school that they have or something in life science because there's so many of those types of requirements out there right now.”

Some “headquarter” type businesses looked at the site, Griffin said, many with lab and tech space in mind, but the mixed-use potential of Bayside rose to the top.

“This would be a project that would have some nice restaurants and retail components to it,” he said. “They also talked about some potential housing, something that would be supportive of the school. And there is a sort of consensus this is one of most desirable big pieces of ground that had been in the market for a long time.”

“In the third round, we actually had Chancellor [Katherine] Newman provide her vision as a kind of mission statement back to developers to help guide their work and refine their pricing,” he said. “So, throughout the process the needs of the campus were put at the forefront of it and the ability to tie in.”

UMass spokesman Jeff Cournoyer said “the process of sort of visioning exactly what the mix” will be on the site “is still to come.”

The advisory group — led by UMass Building Authority chairman Victor Wooridge, a veteran real estate executive— worked with Newmark to choose the developer. In doing so, they looped in every local elected official and met with both the Columbia-Savin Hill Civic Association and the John W. McCormack Civic Association though the process, Cournoyer said. The existing Columbia Point Master Plan was also factored into the selection.

“The design is really going to be up to the developer to work through a full and robust community process from a design standpoint,” Byrne said. “From a campus engagement standpoint, we can certainly speak to the rights of the campus going forward…. Put simply, the campus is going to maintain as many rights as possible to future opportunities to develop on their own account — for housing or for other academic needs going forward.

Details were slim Wednesday, but the team said the terms were for a 99-year ground lease for the Bayside site.

“My expectation is that there will be a robust conversation around the criteria, which obviously were heavily weighted towards returning the greatest return to the campus and to the university from a financial standpoint,” Cournoyer said. “There were other things taken into consideration, of course: the feasibility of delivering on this project, commitment to that stakeholder process and community input process that we discussed, to diversity and hiring practices and vendors and suppliers and so on and so forth.”

On the financing side, Cournoyer said: “There won't be any question with regard to whether or not the developer selected was with offering the best financial package for the university.”

Infrastructure commitments were important part as well. The winning group “went out of their way to make a specific infrastructure commitment “ We all know there needs to be real dollars spent to help start solving some of those connectivity between the Red Line and the campus, whether it's a new footbridge or rather and [Kosziusko] Circle as well.”

City Councillor Frank Baker, whose district includes the Columbia Point campus, was enthusiastic about the news.

"This could potentially unlock transportation issues that we’ve had for years, and while putting UMass on good financial footing to plan for future of the campus,” City Councillor Frank Baker told the Reporter. “For me, that’s one of the big things.” Baker said. “The campus will be great, we’ll be able to walk through there, our kids will have access to job training and internships, but transportation is a big one."

There were voices raised against the Bayside deal.

In a statement on Wednesday, UMass Boston's Staff Faculty Union registered their disapproval, citing concerns about rising fees for parking and last year's UMass Amherst maneuver to purchase Mount Ida College in Newton, which many on the Boston campus view as undermining the Dorchester campus.

“The Mount Ida deal was made behind closed doors, and we are seeing a similar lack of transparency with plans for the Bayside lot,” said Marlene Kim, president of the Staff Faculty Union. “The students, staff and faculty have had no input into major decisions affecting our campus.”
Until today, in fact, most of the process around choosing a development partner was held in the utmost of secrecy.

In denying a Dorchester Reporter request for information last fall, the Building Authority’s general counsel David Mullen argued that releasing information before the selection process has been completed would “taint the competitive process” and “undermine UMBA’s bargaining position.”

“The harm, obviously, will be to the University and its students when UMBA is unable to participate on equal footing with private entities in the marketplace and, therefore, unable to realize the maximum value of University assets,” Mullen wrote in a letter dated Oct. 24.

Still unclear today is precisely what sort of public review process will accompany the redevelopment of Bayside. Since the university technically owns the site, it will likely remain exempt from the typical large project review managed by the city’s Boston Planning and Development Agency (BPDA).

In an interview with the Reporter last year, BPDA director Brian Golden expressed confidence that UMass and its development partner will include the city in their efforts to plan out what he called a “mammoth” parcel with “tremendous potential there.”

“What happens there is not going to just be UMass classroom space and UMass facilities for their education mission,” Golden told the Reporter. “It’s going to be a broad array of activity covering all the bases. And, so what we in our communications with UMass have made clear, and as well as the mayor himself, is we expect — and UMass, we’re confident will address our desire — we expect strong opportunities for input into the decision making, both the planning and the specific projects that flow from that planning.”