Campbell gives her campaign launch speech to reporters outside of her childhood home in Roxbury.

District 4 City councillor Andrea Campbell announced on Thursday that she’s running for Mayor in 2021. A native Bostonian, Campbell said in her campaign video that she’s running “because every neighborhood deserves real change and to give every Bostonian a chance to succeed.”

Campbell's campaign released a video this morning that leans heavily on her roots in the city, her connection to the Boston Public Schools and her work as a councillor.

“In this profound moment of reckoning for our country and our city, as people rise up to demand change, Boston needs leadership that not only understands, but has lived the systemic inequities facing our residents every day. I'm running for Mayor to be that leader, to bring our city together to confront inequities head-on, and finally make Boston a City that works for everyone,” Campbell said in a statement released to the media Wednesday night.

During a press conference outside of her childhood home in Roxbury, Campbell told reporters that her vision for Boston is driven by her life story.

“Today I’m standing here surrounded by family and friends to embark on a new journey with and for the people of Boston in the place where my journey started. My earliest memories are here, behind 1850 Washington St. in Roxbury. Growing up, we were poor and I rememberer walking over with my grandmother’s to Rosie’s Place for a meal or anything else we needed," she said.

Born and raised in Roxbury and the South End, Campbell and her twin brother Andre lost their mother in a car accident when they were just eight months old, and their father was incarcerated for the first eight years of their lives. For those eight years, she and her siblings grew up with relatives and in foster care, often in public housing and on food assistance.

“My entire life has been connected to and shaped by the city of Boston. Boston is where I was born and raised where I went to public schools, started my legal career, and my public service. But it is also where I have suffered tremendous pain and loss from the very beginning my family was torn apart by loss and incarceration that would sadly continue,” Campbell said.

Campbell’s father died when she was 19 and her brothers cycled in and out of the criminal justice system. Her twin brother Andre died at age 29 while awaiting trial. Campbell said her family has never been given a full accounting of Andre's death.

“I’ve had a lot of loss in my life but what happened to Andre’s changed everything, but rather than stay in a space of anger I prayed and throughout about my purpose. I asked one fundamental question that still fuels my work: How do two twins born and raised in the City of Boston have such different life outcomes?" she asked.

“Boston is where I was born and raised; where I went to five excellent Boston Public Schools, where I started my career in Roxbury, and started my own family in Mattapan; and where I have proudly served my community of District 4 for the past five years. But it's also where I've suffered tremendous pain and loss, and experienced how Boston is a city divided by access to opportunity. 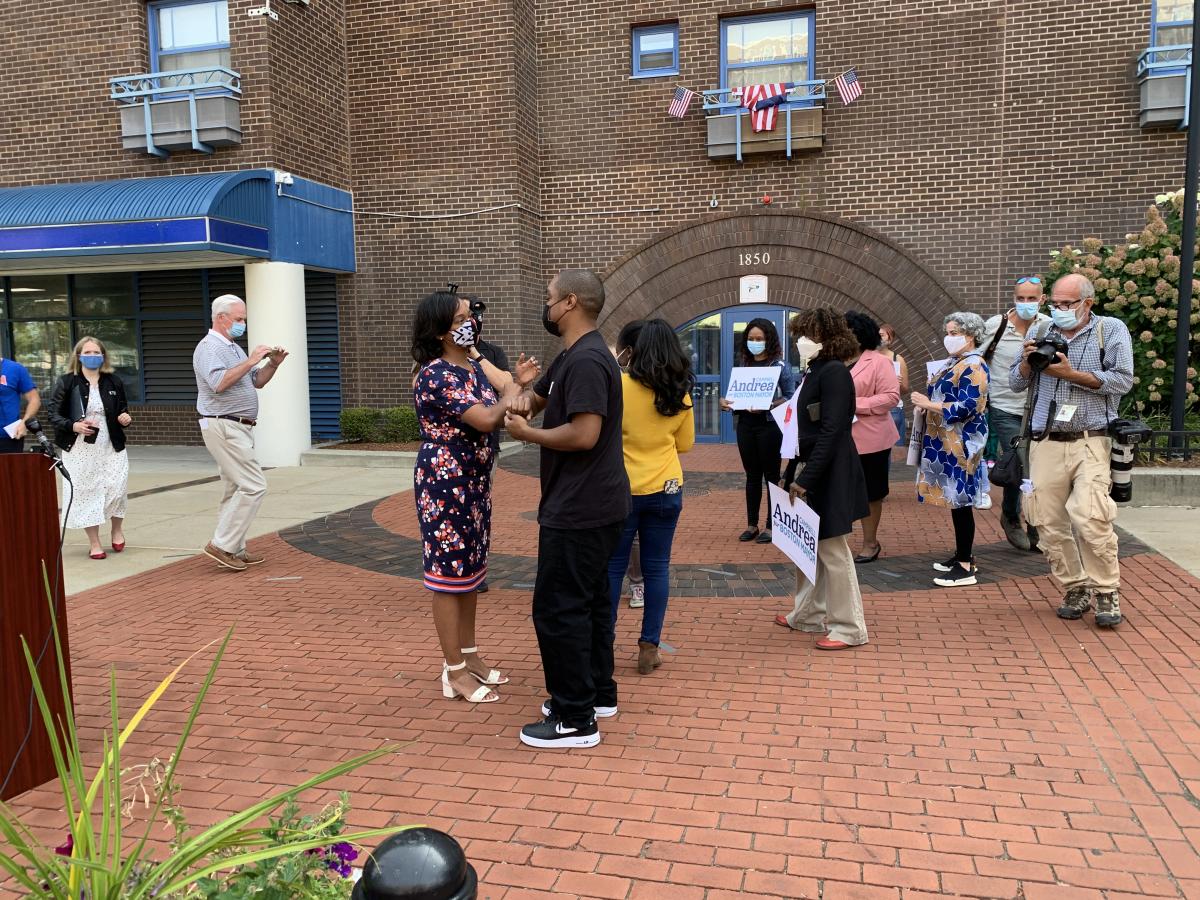 Campbell greeted a supporter on Thursday before her campaign announcement.

Campbell said she's running to usher in "fearless leadership" that will seek to dismantle systemic racism in the city.

"This year Boston is facing a crucial moment and we can and must confront our own history of exclusion, segregation, and marginalization if we are to transform systems so that they truly serve all of our residents equitably. For that we need leadership," she said.

"Leadership that is intentional about eradicating systemic inequities and racism that will break cycles of poverty, trauma, and injustice in our communities; leadership that understands what equity truly means and what it looks like; leadership that is and was born out of the struggle to survive, to make it, and to do better by the next generation.

I'm running to be that leader, because I know the reputation of being a world class city with a growing economy, emerging industries, and expanding neighborhoods means absolutely nothing If a child born in public housing in my district will never be able to access that opportunity.

I stand here today as a girl who grew up in public housing in Roxbury and the South End, with a family torn apart by incarceration and loss, who could be elected the first Black woman to serve as president of the Boston City Council and today launched a campaign to be the first Black and woman mayor of the City of Boston."

As a City Councillor representing District 4, which includes large sections of Dorchester and Mattapan, as well as pieces of Jamaica Plain and Roslindale, Campbell has recently focused on police reform, proposing an ordinance for a Civilian Review Board on the council.

According to the Office of Campaign and Political Finance (OCPF,) as of August, Campbell has roughly $285,000 cash on hand, compared to at-large Councillor and mayoral candidate Michelle Wu’s $346,000. Mayor Walsh hasn’t publicly announced whether or not he’ll run for re-election next year, but he has $5.5 million in campaign funding.

Campbell served as Deputy Legal Counsel in Governor Deval Patrick's administration, working to create more equitable systems and deliver progressive change to communities across the Commonwealth. In 2015, she was elected to the council when she successfully challenged a 32-year incumbent to represent District 4.