New COVID-19 restrictions limiting restaurants to take-out and delivery service went into effect on Tuesday, leaving establishments across Dorchester scrambling to put contingency plans in place in hopes of staying afloat during what will be an unprecedented period of partial closure for those that attempt to stay open.

By Tuesday morning, residents were encountering the “new normal” at establishments around their neighborhoods in the form of signs posted on doors and outgoing voicemails explaining procedures going forward.

At Dorchester Brewing Company (DBCo), co-founder and CEO Matt Malloy told the Reporter that he was struggling with the uncertainty and open-endedness of the crisis.

“There’s no end date on this, there’s no finite issue...I mean,” he said, “I’m hearing the CDC recommend that businesses stay closed for eight weeks.”

DBCo was among the first businesses to close down, opting to voluntarily close to sit-in customers on Sunday, hours before the state issued its new policies. “Technically we could have stayed open, but I think we did the right thing,” said Malloy.

Currently, customers can purchase beer, gift cards, and merchandise at the brewery and order take-out food to-go from M&M BBQ, the restaurant housed inside the building, between 11:30 a.m. and 7:30 p.m. And a new “social distance special” offers patrons a discount: any four-pack or growler for a reduced $10 price.

Meanwhile, DBCo’s 15-20 person bar staff has been whittled down to one employee, who, Malloy says, will be paid for the shift for the first week. After that, he knows his business will need help.

“We’re hoping that the city, state, and federal government helps out small businesses, because you’re gonna hear a lot of stories about businesses going under if that doesn’t happen. This is very scary because it’s uncharted territory.”

Geo Lambert, owner of M&M, said customers can place take-out orders by phone. Because the restaurant opened weeks ago, in January, a partnership with food delivery apps like Doordash or Grubhub has yet to materialize.

About a third of the brewery’s beer orders have already been canceled, added Malloy, who was worried about the fate of the thousands of gallons of beer currently being brewed in giant steel tanks onsite.

“This is where we need the community to come down and help,” he said, noting that the majority of brewery employees and management are themselves Dorchester residents. “Please help us out. We need it. These are local people who live next to you in Dorchester. We’re not a big company, we’re not Anheuser-Busch...when you think about the businesses in Dorchester with the potential to be the hardest hit, it is the small businesses.”

M&M BBQ is open for takeout: order food to-go and get a discount on DBCo beer. Dan Sheehan photo

Malloy’s plea for help was echoed by business owners from Savin Hill to Ashmont.

Local standbys like Molinari’s in Adams Village, Antonio’s HiFi Pizza in Fields Corner, and One Family Diner on Bowdoin Street all reassured customers they would be open for take-out services during their regular hours. Tony Barros, co-owner of Cesaria restaurant, has chosen to follow suit, but he is unsure how long that will be possible. He plans to offer take-out for the “next few days” until their supply of perishables is used “and then revisit it. I don’t think it will make sense [to continue]. We’ll see how it goes.” He added that the restaurant has seen “large decreases in sales since Thursday.”

Others, like Tavolo in Ashmont, have temporarily switched to offering to-go food from 5 p.m. to 9 p.m. But for bars and eateries that lack the capacity for exclusively take-out service, the only option was to close completely, and indefinitely.
Other shops, like the Ice Creamsmith in Lower Mills, have adapted their normal service to the times.

“We shut down last Friday and came up with a game plan and are doing a take-out window at our front door, so no one is allowed inside,” the shop’s owner, Chris Skillin, told the Reporter. “We have a full menu at the door. Currently we do not do delivery service...we are maybe going to sign up for an UberEats type of thing, changing our whole entire mentality to run the shop. It’s been a challenge, so we’re doing what we can.”

The economic impact on Dorchester establishments reflects the massive hit being taken by restaurants statewide. The Massachusetts Restaurant Association told the State House News Service on Monday that the last few days "have been some of the most stressful and anxiety-ridden days our industry has faced in recent memory and possibly ever.” The association has created a webpage with industry-specific guidelines, safety protocols, and recommendations for restaurateurs coping with the threat and restrictions of the coronavirus. 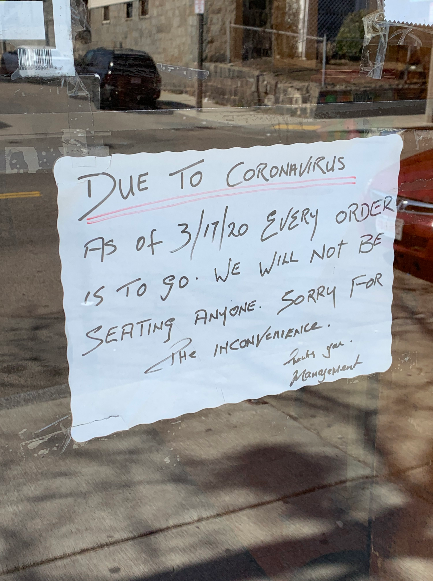 A notice posted on the door of One Family Diner on Bowdoin Street. Dan Sheehan photo

Also on Monday, Greater Ashmont Main Streets offered its social media followers a list of ways they can support local businesses from the safety of quarantine, including purchasing gift cards and ordering online.

Shock waves from the COVID-19 outbreak continued to ripple through the neighborhood on Monday, the eve of St. Patrick's Day, normally an important driver of business for local Irish pubs.

At the Blarney Stone on Dorchester Avenue in Fields Corner, workers served up plates and poured pints of Guinness to about 20 customers Monday night who turned out on the eve of the mandatory shut-down for dining and drinking in establishments.
Festooned with St. Patrick's Day streamers, the bar and restaurant will continue to serve food to-go and plans delivery services as well.

Farther up the avenue, another Irish pub was bracing for a long hibernation. The Banshee, which is typically packed with patrons during the week of St. Patrick's Day, was largely empty on Monday night, with just a dozen or so regulars speckled throughout the room.

The Banshee won't offer take-out food, so it was last call for the barroom until April, perhaps longer. An Irish reel played over the sound system as co-owner Michael Vaughn bought a round for a pack of regulars who were saying their goodbyes— for now— to each other and to their favorite watering hole.

"We'll see you again soon. We’ll be back," Vaughn counseled with a smile.