The Boston Society of Architects held a virtual conversation about sustainable homes and energy retrofits for small- to middle-scale housing last week as a part of its upcoming exhibition, the “Future-Decker Series.”

The series features discussions with residents, architects, and designers as they share and learn from one other about the past, present, and future of the iconic building type that’s prevalent in Dorchester and other Boston neighborhoods: the three-decker.

Speakers touched on the architectural, economic, and, ultimately, social value of retrofitting three-deckers to be sustainable as part of the city’s carbon neutrality goals.

Kat Eshel, the city’s Carbon Neutrality Program manager, pointed to Mayor Martin Walsh’s commitment in 2017 to reach carbon neutrality by 2050, and added that the city has been able to cut its emissions by 20 percent since 2005.

“But that means that we’re not moving fast enough. We’re kind of on track to meet that blue line but we are way above that red line,” said Eshel, referring to a chart of the city’s carbon emissions displayed below.

“The red line is what we need to be at if we want to get to carbon neutrality by 2050,” she said.

She noted that the city has undertaken a technical analysis of how to “chart a path to carbon neutrality” after the mayor committed four years ago to reaching that goal by 2050.

“We took those results and then engaged in a year-long planning effort to identify and map out our highest priority strategies to bend that curve and get on track to cut out emissions,” Eshel said.

An analysis of the city’s most recent inventory report shows that about 29 percent of emissions come from transportation; 70 percent come from buildings; and a small percentage from waste water treatments and the city’s old natural gas system.

Eshel broke down the different types of the city’s building stock by their emissions output.

“About 50 percent of that is large buildings— big, affordable housing projects and other commercial and institutional buildings. But about 20 percent comes from smaller buildings, including single-family homes up to about six units,” she said.

“We have a lot of those buildings in the city and they account for about a fifth of our emissions.”

The city’s housing stock includes about 13,000-14,000 three-deckers, many of which are owner-occupied.

“What’s really neat about them is that 40 percent are owner-occupied. That means there’s a real opportunity because if you also live in [one], you’re more likely to be willing to invest in energy efficiency because you’re also going to benefit from having more insulation, better air sealing; it’s going to benefit you, too,” said Eshel.

Many three-deckers operate on oil or gas heat, the type of energy the city is attempting to transition away from in favor of cleaner energy sources, like heat pumps, solar panels, and air sealing. “There’s also a great, flat roof-deck on a lot of [them], and that’s a great opportunity for solar,” said Eshel.

“We’re developing mandatory carbon targets for those existing large buildings first. That being said, we know that there are lots of other buildings in Boston and some of our other work is more geared toward resources,” said Eshel.

“We want to develop a resource hub so that building owners and residents can connect with a team of folks at the city who could connect them with financing resources and one on one support.”

We’re also partnering with affordable housing providers to demonstrate different retrofit technologies. It’s one thing to know that new technology is out there; it’s a completely different thing to actually try it out and see how it works in the field.” 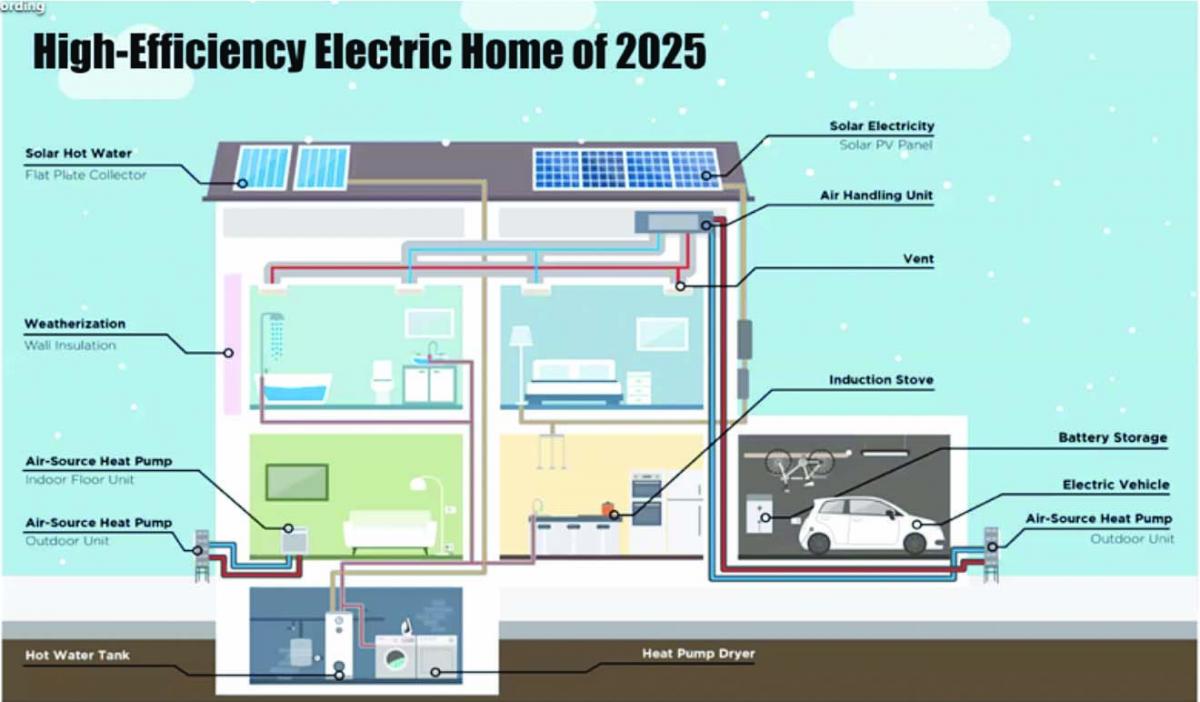 A slide from the presentation in the Future Decker conversation series.

The Boston Planning and Development Agency (BPDA) is also developing design guidelines for climate resilience and Eshel said the city hopes to look at what it would mean to retrofit a three-decker both from “an energy and emissions standpoint while also thinking about those that might be in the floodplain.”

She went on to say that the city is thinking about how to do all this together and not having to continually renovate three-deckers because of climate impacts.

Galen Nelson, chief program officer at Massachusetts Clean Energy Center, said that statewide emissions are coming from sources similar to that of Boston’s.

“I think it’s important to note that new construction gets a lot of attention— the fancy, new, high performing buildings that are getting built in Boston and in the surrounding communities in the state,” he said. “But existing buildings are really our greatest decarbonization challenge, and 85 percent of the building environment in 2050 will be buildings that exist today. Getting the construction right is important, but we need to work together as a community to tackle existing buildings.”

Nelson explained that a city and state collaboration to retrofit three-deckers would keep the historic housing stock viable well into the 21st century in areas of the city where climate change in the form of coastal flooding and stormwater inundation is a growing threat.

They are “culturally and historically important to Boston and the region and that is why we wanted to focus attention there.” He said the collaboration “could have a substantive impact” on three-deckers that could also “help inform retrofit work in other building typology.”

He added that the “best way to preserve” them is via upgrading and not leave them in place as obsolete “carbon-heavy relics” of the past. “If we can identify ways to retrofit them sensitively and cost-effectively,” he said, “I think that will be our best shot at preserving this really important housing typology.” 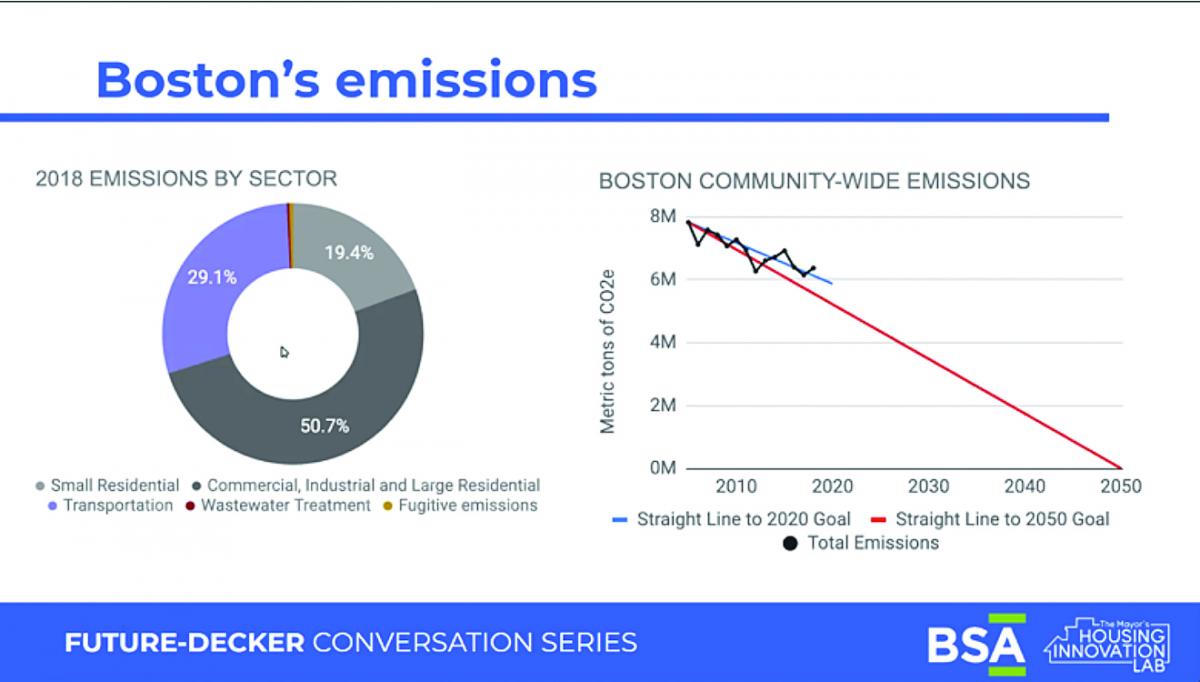 According to Gelson, the high efficiency home of this century should include effective air-sealing; electrified heating and cooling systems; induction stoves; and a design that would consider “the transportation side,” making space for charging infrastructure for electric vehicles.

“Unfortunately, we often see the glossy visions of the future, but this is really our reality right now,” he said, noting the city’s many three-deckers and smaller houses while pointing to a slide containing a rendering of the model electric home.

There would be significant challenges facing the owner of a three-decker who is looking to retrofit for energy efficiency, though.

“There are some difficult conditions that present some fairly serious barriers to performing the type of energy retrofitted that we need,” said Nelson, referring to pictures displaying several different complications.

Massachusetts Clean Energy Center, in partnership with the city’s housing innovation lab and the BSA, launched a program calling for design proposals to retrofit three-deckers.

Said Nelson: “We wanted to focus attention on this housing typology and bring the best of what Boston and national designers had to offer, we wanted to challenge the community to develop replicable, scalable retrofit approaches” for existing three-deckers.

The design challenge includes two tracks, one design for a three-decker retrofit, and a separate one for retrofitting and the addition of another unit to bring in additional revenue. A total of 13 designs were submitted and evaluations are under way, said Nelson.

“A lot of the applicants thought about the opportunity to add another unit and how that could change the project economics and provide additional revenue streams to owner occupants,” he said. “We asked them to also consider the carbon content of the materials planning to use as a way to begin to trigger more critical thinking about the materials we are using to retrofit our buildings.”

“A lot of applicants did fully electrify and we were very happy with the variety of approaches we saw. A couple of applicants had very creative approaches to addressing the tenant/landlord split incentive.”

He added: “We were really happy with the proposals and we will be inviting the community to weigh in on a Peoples’ Choice award when we make them public on our website.”

Anatol Zuckerman, an architect, asked if there would be any competition for new three-decker designs. Nelson answered that “we’re not doing that this time.” He went on to talk about some focus “on high performance small multi-family buildings” but said that the competition is about identifying future possibilities for the three-deckers in place now.

Eshel added that the team could potentially look at new designs in a different segment of the “Future Decker Series.”

Another architect, Saul Accetta, asked about the logistics of implementing a fourth unit in a retrofit design. Nelson couldn’t reveal any specific design elements until the evaluation process is completed, but he did note that there will be many three-deckers and other multiple-unit homes “where adding a unit is either not feasible, doesn’t make sense, too difficult to get around zoning challenges or other barriers, but there may be many where it does make sense, and in those cases, adding an additional unit really changes the project economics in a very exciting way which is why we included that tract in the design commission.”

He added that once the city and state are able to locate financing, and actually start doing some retrofits, the organizations involved will be better able to understand the payback.

“We need to get down to serious business here,” he said. “We have our eye on funding, working with our partners at the Department of Energy Resources to identify funding to actually pay for some retrofits in both affordable housing and market rate housing based on either in part or entirely the designs that are identified in this competition,” he said.

“That will allow us to better understand and confirm the energy performance. There’s a reason why we’ve invested so much in energy efficiency and that’s because we know it pays back. We have a high degree of confidence in that, but we don’t exactly know what the cost of those retrofits will be. So by building out these projects we’ll better understand what those paybacks periods will be and that’s why we’ve contemplated this additional unit.”

Wandy Pascoal, a Housing Innovation Design Fellow at the city’s Department of Neighborhood Development, said, “In order to do some of these changes we really have to tap into the financial resources that exist.”

The BSA will host another Future-Decker Series event on Wed., Dec. 16, to discuss affordability.