One of the concepts for the library project in Codman Square calls for housing to be placed on top of a new or renovated branch building.
Graphic courtesy Sasaki

The good news is that no matter what, the Boston Public Library (BPL) has committed to either a major renovation or a brand-new branch library at Codman Square on the existing site.

The pause in the matter for both the city and the community involves the matter of implementing affordable housing with rehabbed or new library as part of an initiative called “Housing with Public Assets.”

The question was first broached last Tuesday night during the third community meeting for the Codman Square library renovation/replacement project. Previously, BPL and the city had announced that the new Uphams Corner branch library would be part of an affordable housing development project, an idea that is being explored at other library projects across the city. 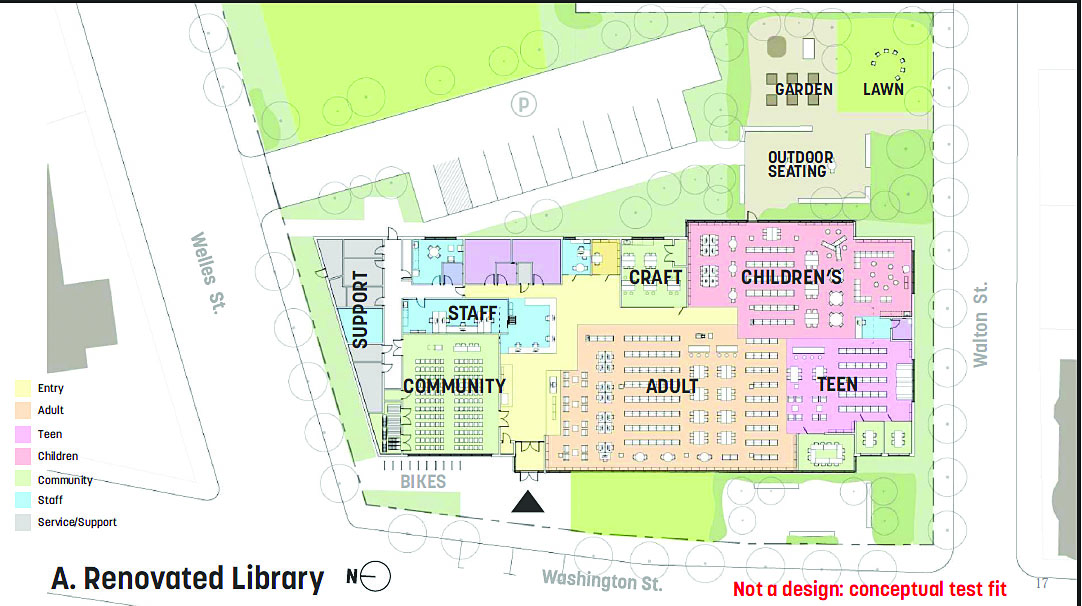 Above, a concept drawing of the Codman Square branch library illustrates how the building might be laid out if the project were to move forward without a housing component. The Boston Public Library and City officials are weighing whether to introduce housing on the site as part of a citywide review of BPL assets. Either way, BPL president David Leonard says that the Codman branch will renovated or rebuilt.

The concept has been used successfully in places like Chicago, and now it’s a housing initiative from the Department of Neighborhood Development (DND) that is included in discussions for almost all city building projects, particularly libraries.

“No matter what happens with the housing idea, there will be a great new library in Codman Square,” said BPL President David Leonard. “We don’t have to do housing on this site. This is one of six sites where that concept is being explored. One site it isn’t happening on is Fields Corner. It is definitely happening, though, in Uphams Corner and Chinatown, and maybe in the West End…The idea in Uphams was development without displacement. We want to ensure that no one should have to move if they don’t want to move. We want to make sure there are affordable housing opportunities for people to take advantage of. There will be a state-of-the-art library as a baseline, but maybe there’s an opportunity here to have a great library, plus housing, plus green space preservation.”

At last week’s the meeting, the lead consultants on the programming and housing study, Sasaki, presented three possibilities, with the last one seemingly being pointed to as the strongest proposal. The first proposes a fully renovated library where it currently stands, with the potential for a 5-story, 34-unit building constructed separately on the open space facing Welles Avenue.

The final proposal blends a new library building in the same location hugging Welles and Washington, with stacked housing on top of it that would cover a good portion of the entire lot. That concept features a 4-story building on Walton Street that would recede to a 2-story building above the new library, forming a U-shaped structure. There are 69 units in that proposal, which allows for the least amount of retained green space retained (11,500 square feet) in a space that includes what is a now a very generous amount of green space (27,500 square feet).

The consultants said that the current library building is not sound enough structurally to be renovated and also support housing on top of it as a way to preserve all of the existing open space.

While the notion of setting up housing above the library wasn’t altogether rejected by neighbors, who numbered more than 50 online and in person, it was clear the city hasn’t gotten total buy-in just yet.

Neighbors such as Cynthia Loesch-Johnson, Vicki Rugo, and Sally Graham commented that the housing discussion and the proposals seemed rushed, as if they were already decided on before the meeting.

Elnora Thompson, who teaches quilting at the library to senior citizens, said the green space there is valuable to residents. “There have to be better options,” she said. “There are four schools and a YMCA right there…Don’t take away the green space. You have a lot of vacant lots nearby for building housing.”

Leonard stressed that BPL simply wanted to introduce the concept to see if “Housing with Public Assets” could work with the Codman branch. “I want to make it clear no decision have been made,” he said. “The only thing that is definite is we want to restore or build a new library on this site.”

Another criticism aired at the meeting was that the details of the renovated or new library were lost amid the adding housing discussions. Neighbors asked for a separate discussion only for housing going forward, separate from any further library programming meetings.

The process is now in the last stage of the Programming Study phase, which is expected to end in mid-November with a submitted report. That issuance of the report will mark the time for a decision on whether or not to include housing as part of the project. The design process is expected to last another 12 months, with construction scheduled over 18 to 24 months.