"The Avenue in the Rain" by Childe Hassam

Mayor Walsh’s appointment as US Secretary of Labor means that a Dorchester personality will be heading down to D.C. in the coming weeks, but the work of another Dot native has already re-staked its claim to a position in the White House.

On Inauguration Day last Wednesday, President Joe Biden’s administration revealed that in the course of redecorating the Oval Office, they had chosen to display “The Avenue in the Rain,” a painting by American Impressionist artist and Dorchester native Childe Hassam.

Born in 1859, Hassam grew up on Olney Street on Meetinghouse Hill, where he first took art lessons as a student at the Mather School. After two years at Dorchester High School, he left to study wood engraving and began painting watercolors before eventually moving on to oil paintings.

His work, influenced by the French Impressionists, was featured in Boston art galleries at the time. After studying at the prestigious Academie Julian in Paris and spending years traveling across Europe, Hassam established himself at the forefront of the American Impressionist movement. 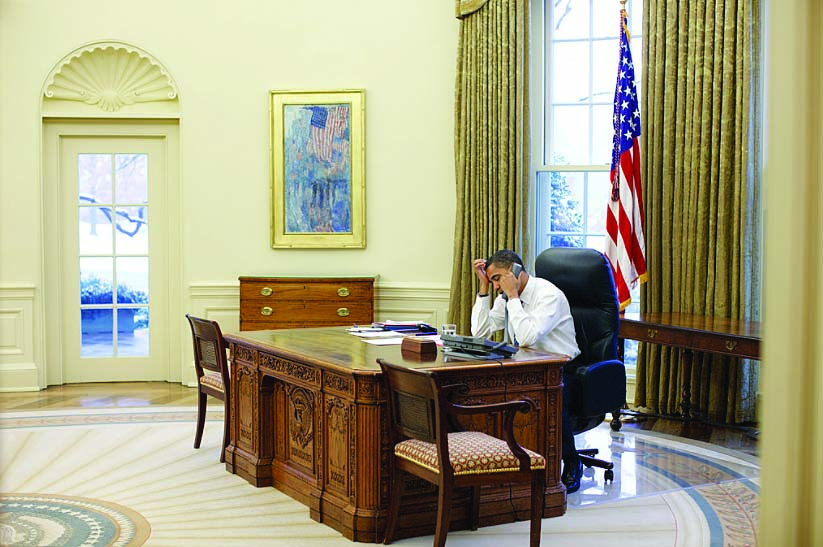 President Barack Obama on a call with the Childe Hassam painting on the wall behind him.

“The Avenue in the Rain” depicts a soggy streetscape draped in American flags. It is part of Hassam’s Flag Series, a set of his most famous and typically patriotic works painted before and during the first World War.

The avenue in question is not Dorchester Avenue, but rather 5th Avenue in Manhattan, where Hassam created the piece in 1917.

The painting has been in the White House’s permanent art collection since the Kennedy administration and was on display in the Oval Office during Bill Clinton and Barack Obama’s terms in office. It was removed during Donald Trump’s term.

Now, to the left of the Resolute desk, the work of a son of Dorchester once again is on display in the White House.