"I'd like to be able to step away and have Dorchester Bay City in a good spot." - Frank Baker

City Councillor Frank Baker of Savin Hill, who after what he called “a difficult decision,” has decided to run for re-election to the District 3 seat he has held since 2011, says he was nearly ready to step away from public life until the pandemic upended his plans.

“If Covid didn’t hit, I would have felt like my job got wrapped up… and it was okay to go,” Baker told the Reporter this week. “But everything is up in the air, and I would feel incomplete. There are some things that need to be finished up.”

One of the projects at the top of his to-do list is Dorchester Bay City, the massive redevelopment of the former Bayside Expo Center and adjacent parcels on Columbia Point.

Baker has been a vocal advocate for incorporating the waterfront site into the neighborhood— urging the development team at Accordia Partners to brand the 20-plus acre location as a gateway to Dorchester. He sees the project, which is under review now by the Boston Planning and Development Agency (BPDA), as the key to other improvements that he has long sought as a public official and as a neighbor.

“We’re really trying to come up with a coordinated effort. We want to work toward that being a shovel-ready project,” Baker said, adding that he wants to make use of federal stimulus money to propel infrastructure upgrades at Kosciuszko Circle, Day Boulevard, and the JFK-UMass Red Line station.

“I’d like to be able to step away and have Dorchester Bay City in a good spot,” he said.

Other incomplete development projects in District 3 are also on Baker’s watch list, including Dot Block, which is now underway near Glover’s Corner at the intersection of Dot Ave. and Freeport and Hancock streets.

Baker said he feels he has had success “working within my perimeters to deal with the development in my neighborhood” and secure affordable housing. 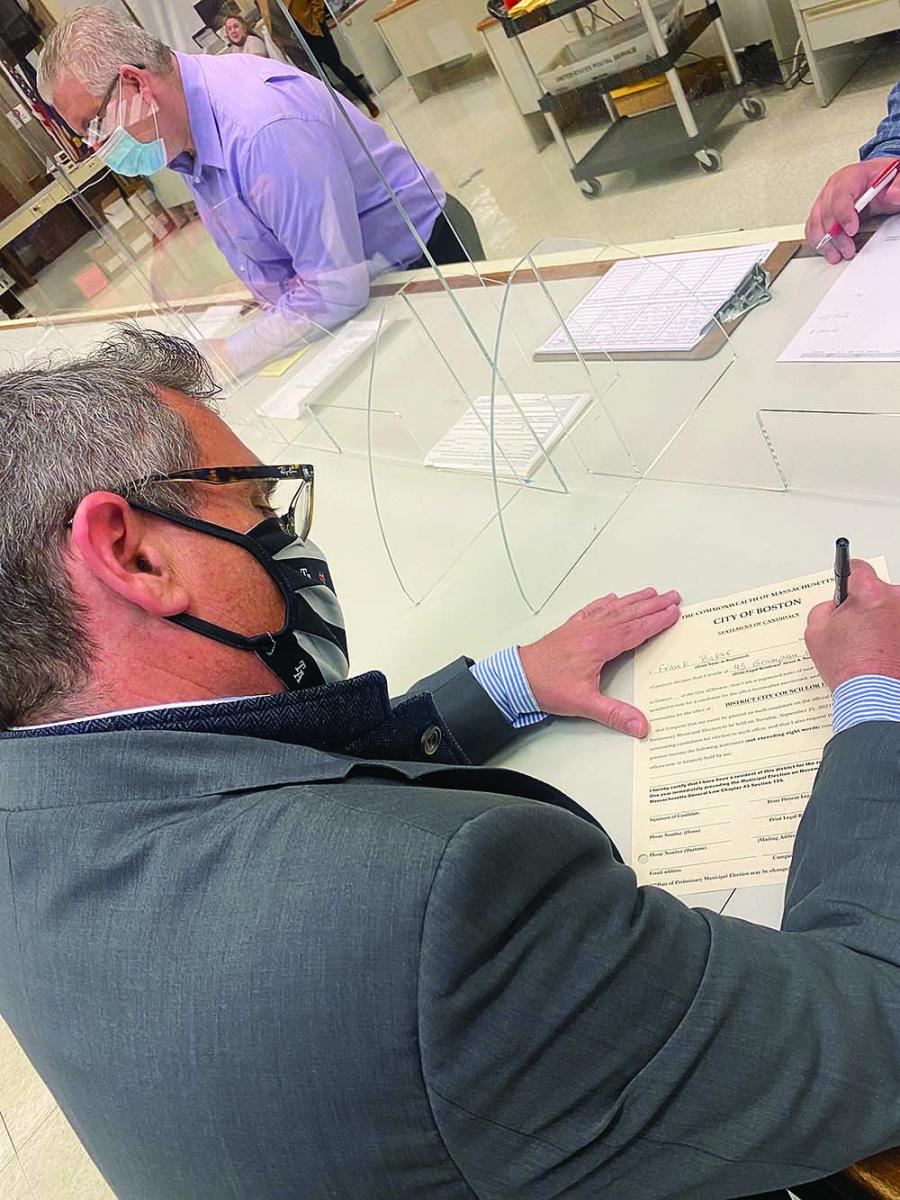 In acknowledging that he had some reservations about continuing to serve in office, Baker said he has been a target of both online and, he says, more up-close harassment for his votes as a councillor, a record that can be characterized as contrarian on a council that has changed significantly since he took office a decade ago.

“It’s a different council, and I have my personal opinions,” Baker said on Monday. “I would consider myself exactly in the center. I am an extreme centrist.”

He added: “As much as some of my colleagues have called me a racist, I don’t operate like that. I operate through fairness.”

A low point, Baker says, came last year when he was the sole councillor to vote against a council measure supporting a moratorium on evictions during the pandemic.

“When I took a differing opinion on the rent moratorium, I was attacked at my house,” Baker said. “There were colleagues who actively encouraged their supporters to call me and harass me.”

On multiple occasions, he said, fireworks were set off in close proximity to his home. He suspected they were aimed at his house specifically.

The tone of debate in council proceedings has changed, Baker says, citing the virtual nature of meetings. “Now you have people that are able to weigh in from their living room… Zoom has lent itself to very extreme advocacy.”

He called being a councillor “a job that is hard… and has gotten harder. There’s nothing that comes in on Monday that’s done by Wednesday,” he said.

The change at the mayor’s office is another factor that plays a role in Baker’s personal career calculus. A longtime friend and ally of former Mayor Marty Walsh— although the two sometimes parted ways on specific policies— Baker is not aligned with any candidate to replace Walsh.
“There’s not a candidate for me,” he said.

Since winning a very competitive election to succeed now-City Clerk Maureen Feeney in the district seat in 2011, Baker has not faced a serious challenge for re-election. In his most recent filing, he reported having more than $50,000 in his campaign account.
To date, five people have indicated they plan to try to unseat Baker.

Stephen McBride, a Jones Hill resident, is actively gathering signatures. According to data filed with the state’s Office of Campaign and Political Finance (OCPF) at the beginning of April, McBride is the only one of the four who has raised money for a campaign, about $8,000.

Two other people— Raymond Duran Batista Vasquez and Patrick H .Williams – have also signed paperwork with the city’s election department to gather signatures to run. Neither has filed the required forms with OCPF to raise funds.

Romilda Pereira organized a committee last month to run for the seat. Ashawn Dabney-Small, an 18-year-old student who last year said he planned to challenge Baker, was named as Pereira’s treasurer on OCPF documents. But, neither of them has applied at City Hall to gather signatures for the seat and Pereira did not respond to repeated inquiries this week from the Reporter.

No one, including Baker, had qualified for the ballot as of Monday evening. The deadline to file paperwork is next Tuesday (May 11), so more challengers could arise.