A trash-strewn embankment along the southeast expressway near Tenean Beach. Bill Walczak photo

In 1954, construction began on the Southeast Expressway, with Dorchester the chosen path for a highway that would allow for hundreds of thousands of suburbanites to get to and from downtown Boston. Not only did leaders of our Commonwealth decide to place their busiest highway into Boston in Dorchester, but its designers decided that it would be put on an embankment as much as 15-30 feet high in most sections, except in Savin Hill, where it would slice below grade. These high embankments above grade and the high walls for sections below grade block much of Dorchester from its waterfront.

The state has also installed subways and train lines along the same corridor, with two of the three major train lines not stopping in Dorchester until UMass Boston, the Kennedy Library, and BC High requested a stop at JFK/UMass for their suburban students, teachers, and customers.

What happened in Dorchester is consistent with what happened across America during the 1950s, a time of rapid suburbanization and the glorification of the automobile: Designers of the Interstate Highway System typically chose working class and lower income neighborhoods as the places to put highways.

Working class and lower-income urban neighborhoods were considered outmoded, and, therefore, appropriate as the places for pollution-generating, noisy links into the center cities so that people from outside could quickly get into and out of town.

I moved into Dorchester 49 years ago knowing that these roads and rail lines were here, but my desire to live in a dynamic place like Dorchester overcame my fear of a huge highway generating toxic pollution 24 hours a day, and limited train options.

One thing I cannot abide, however, is the fact that our state Highway Department and the MBTA show no respect for the neighborhoods they traverse by ignoring the maintenance of their property.

The photos that accompany this column show the tremendous disrespect that the MBTA and the Highway Department have for Dorchester. Why should a person visiting Tenean Beach, McConnell Playground, Pope John Paul II Park, the Neponset River Trail, or cycling along Morrissey Boulevard have to look at piles of trash on the Southeast Expressway embankment? Why should we have to see ugly graffiti on bridges or the MBTA sound barrier at the Savin Hill T Station for years before it is removed?

I asked Ms. Pennucci if there was a “standard of maintenance for the roads that includes maintenance of the road’s shoulders… and what rubric or measure is used.” I defined “shoulders” as including the embankment, but Ms. Pennucci indicated that their staff determine cleaning needs when they “drive our roadways daily, make observations and facilitate maintenance operations, as needed.” Their last cleaning involved “sweepers that use water to conduct their cleaning and cannot sweep during winter months due to freezing temperatures.” At the risk of stating the obvious, you can’t see the embankments from the highway.

The trash along the embankments has been lying there for years.

Ms. Pennucci, in not answering any question about the embankment, made it clear that the Highway Department doesn’t care what the embankments look like, as they don’t interfere with the vehicles on the roadways. 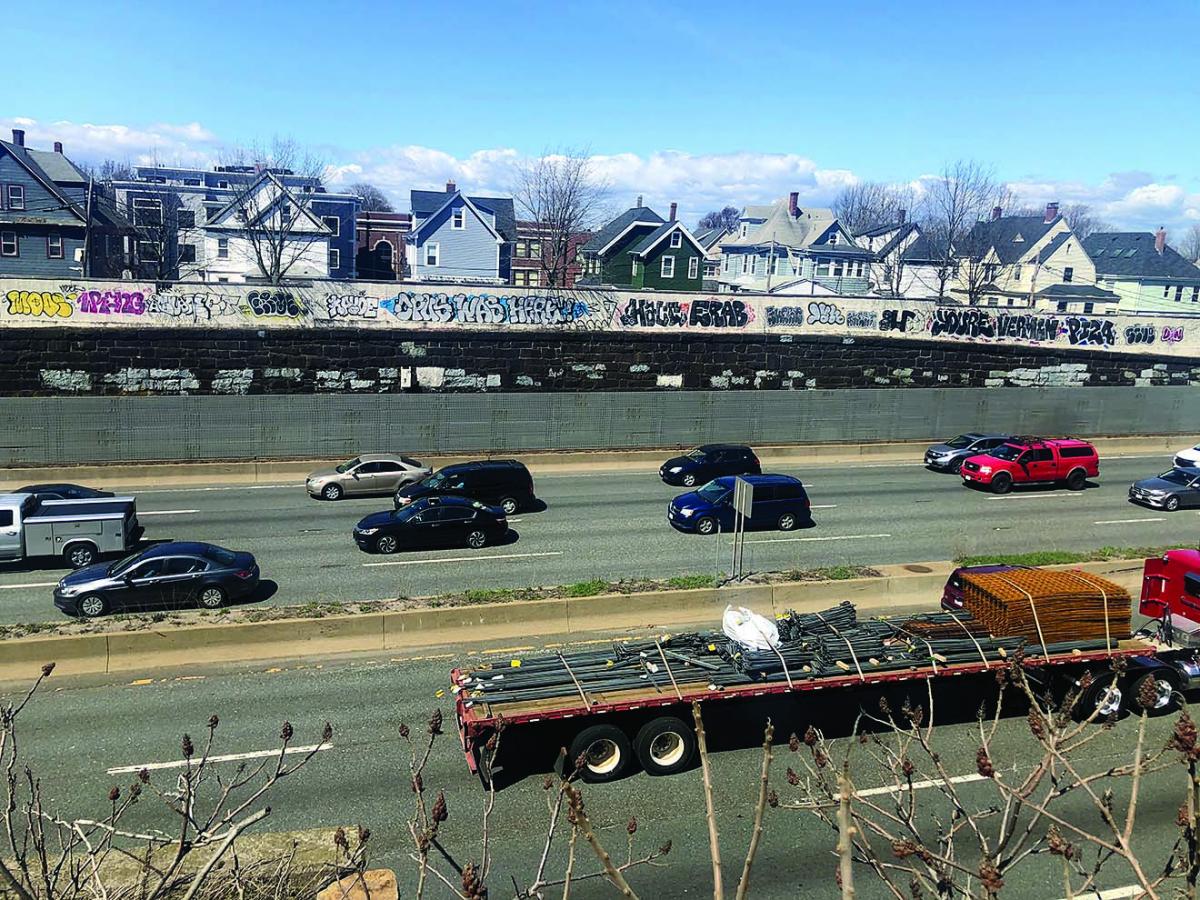 Graffiti lines the walls alongside the tracks of the Red Line in Savin Hill. Bill Walczak photo

As for the graffiti on the MBTA sound barrier along the Red Line tracks near the Savin Hill T Station, Joe Pesaturo, director of communications for the MBTA, acknowledged that the sound barriers are owned by the T, but that “unfortunately, it doesn’t take long for vandals to strike again after the barriers receive a fresh coat of paint.” He also noted that “the pandemic has also had an adverse impact on the agency’s ability to address maintenance matters of a more discretionary nature (those that do not have a direct impact on safety and service).” He stated that a planned suspension in service later this spring “will present the next opportunity for painting work to take place.”

I noted to him that there are ways to prevent graffiti, either by making it impossible to get access to the panels, placing lights and cameras along the barrier, or changing the material to something that graffiti can’t adhere to, rather than put up with the graffiti for years while waiting for a suspension of service and discretionary dollars. His response was that the cost of graffiti prevention is burdensome.

Former Congressman Barney Frank once told me that I should never believe government officials when they tell me that there isn’t enough money to do something important. “There’s plenty of money in government. It’s politics that decide how it’s spent,” he said.

While the MBTA can’t handle graffiti removal because the cost is “burdensome,” it had for a long while policies that allowed MBTA employees to retire with pensions when they were in their 40s. As reported in an article in the Feb. 4, 2020, Boston Herald, “more than one in five MBTA pensioners retired before age 50 as the state increasingly has to pick up the tab on the T’s troubled pension fund that’s running big deficits.”

[Note: the MBTA changed its pensions policy in 2009 by requiring 25 years of service and a minimum age of 55 to receive full pension benefits, but only for those hired after 2009.]

But we can’t get graffiti removed without discretionary dollars.

The Highway Department may find it unreasonable to be expected to maintain its embankments because they see their role as only making sure the roads are in decent shape. But those roads go through Dorchester’s neighborhoods, spewing pollution into our air, blocking our access to our own shore, and blighting our vistas.

The pandemic and civil rights demonstrations of the past year have focused our country around issues of equity. The equitable way for the state to treat the communities that endure the burden of suburban transit into Boston is to find the dollars to maintain its property.

You can help. Besides contacting your elected officials, you can file complaints. Here is a link for contacting the MBTA with questions or concerns: mbta.com/customer-support.

For the Highway Department, you can complain by calling the Highway Call Center at 857-368-3500.
Call today.

Bill Walczak is a Dorchester resident and former CEO of the Codman Square Health Center.