When gunshots ring out on a Boston street, the intensity of the scene, with its police lights, crime tape, and news helicopters, drives a highly emotional reaction that can take over life for those involved in the incident and those watching from a window or a front porch.

It can be a lot to process in the moment, but after the police and evidence collectors disperse, the emotional noise quiets down and the aftermath often can be harder for the community than the event. It’s in that period where Neighborhood Trauma Teams (NTT) look to support everyone involved with processing what they had experienced.

“Trauma is real,” said Efrain Arias, director of the NTT program at the Boston Public Health Commission (BPHC). “The first responders to the scene are not usually EMTs or the police, but the people who live on the street or who might look out their window. We don’t know who was there or what they saw and how that’s affecting them. We want to come back and make sure we reach the person who did look out the window or was standing on the porch…We don’t know how that one person is affected, but we want them to know they can call someone for help.”

The NTT program evolved a few years ago when the community requested more services after shootings. A fledgling response program called Boston Trauma Response (BTR), operated by Justice Resource Institute, had been working crime scenes and supporting families and neighbors in the first 24 hours, but there was a call for more.

After 14 listening sessions, the NTT program was born as a community response team – each supported by a community health center and a community organization. While Catia Mendes and her BRT team still provide on-scene support in the first 24 hours, the NTTs follow up in the weeks after a shooting incident. Originally there were six NTTs operating in Grove Hall, Mattapan, Roxbury, Jamaica Plain, Bowdoin-Geneva, and East Boston. In 2020, three teams were added, in Codman Square, Uphams Corner, and Humboldt Avenue. Five of the nine units are in Dorchester or Mattapan.

“We heard that in the first 24 hours there were lots of services and lots of activity,” said Tara Curry, the lead person on the Codman Square NTT. “By the end of the week, when people were receptive to services and had processed what happened, there was no one there and everyone else had moved on. That can be a very lonely feeling.”

Earlier this month, Curry and other members of the Codman Square NTT were activated and fanned out around Wainwright Park on a quiet Friday afternoon where they distributed brochures about the trauma process and the Trauma Hotline, and talked to anyone who felt a need to say something. The response followed a Sept. 4 incident on Melbourne Street where three people were shot, two of them killed, following a loud house party.

Curry and other volunteers, including Yvonne Pinson, dropped literature at every door and on every car that Friday, six days after the shooting. At one point, Curry approached a street memorial with dozens of lit candles and photos of the two deceased men. In the quiet of the day, she respectfully placed brochures by the candles.

“We know this incident affected our community, but we don’t always know who it affects,” she said. “If we have an opportunity to speak to people, we will. Sometimes people want to talk and sometimes they don’t…Sadly, we’ve been to this area quite a few times recently…It’s during these times when it’s quiet that we’ll have people say they are really glad we’re here.”

Mendes, of the BTR, said they are typically called shortly after a shooting unfolds. On scene, they are mainly there to support family members, friends or witnesses. Some 95 percent of the incidents are non-fatal shootings or homicides. Their job is to assess the scene, figure out if the family has suffered previous incidents, and help where they can.

“A lot of times it’s supporting the person as they come back down from the situation,” said Mendes. “Sometimes a tissue or water can be one of the biggest needs immediately. The men and women on the team are community people and live in the communities they serve. They are survivors, too.”
The BTR often accompanies the families to the hospital, provides follow-up care and services and connects survivors to funeral support services for their loved one.

“We call it psychological First Aid and it’s much like what’s done in the aftermath of a natural disaster,” she said.

The BTR hands off the initial response to the NTT for the days following an incident. That follow up includes visiting the neighborhood, as Curry did at Wainwright Park, and it also can involve referrals from the Trauma Hotline, neighbors who need to talk with someone in person or by phone.

“One reason we do that is because not everyone in the neighborhood was outside or involved at the scene; children and neighbors might be inside the house and pulled back the curtains and saw things,” Curry said. “Maybe you want to call someone and have someone help you talk about it with your children or to get some peace. We do a lot of explaining the process of trauma…in the aftermath. I call it loving on the community.” 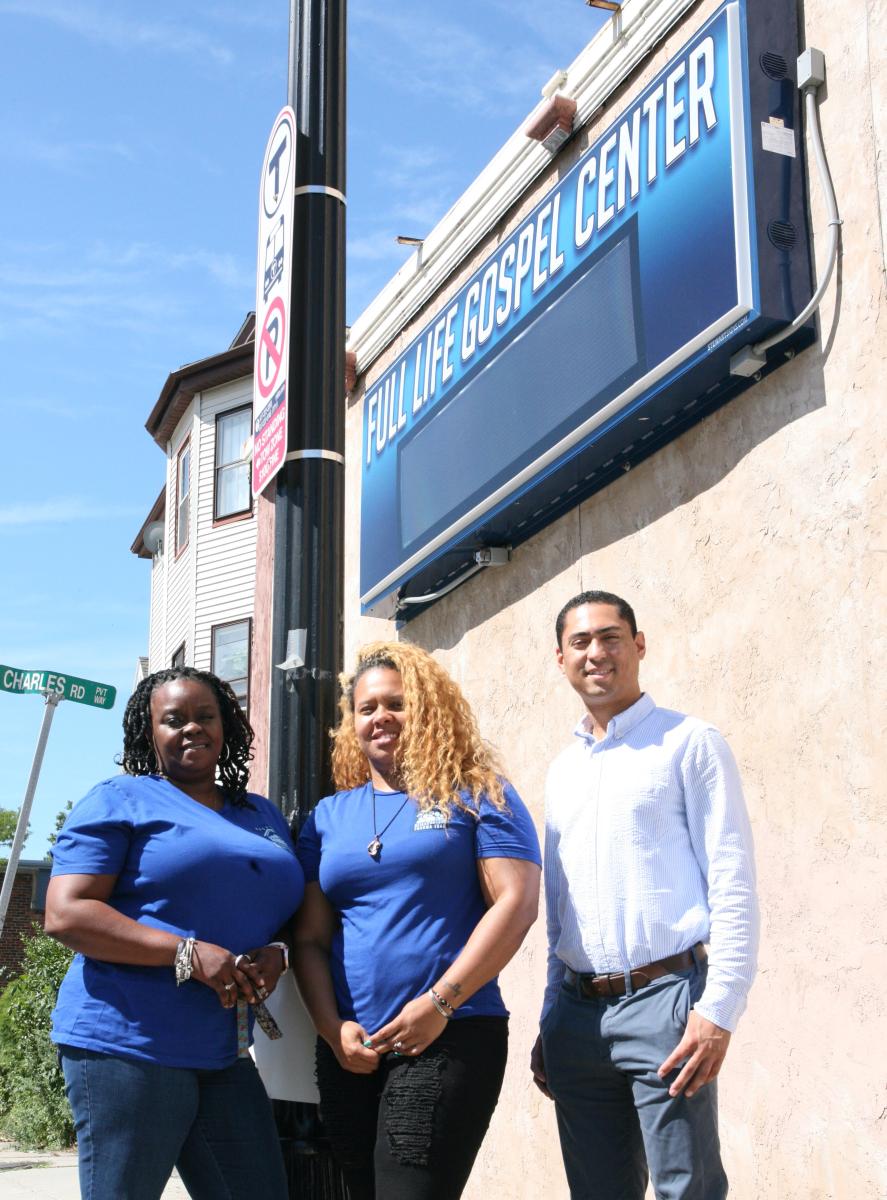 Pictured above, l-r: Tara Curry of the Codman Square NTT, Catia Mendes of the BTR, and NTT Program Director Efrain Arias. The Codman NTT is based out of the Full Life Gospel Center on Norfolk Street. Seth Daniel photo

The idea of supporting those on the periphery of a violent event is a new one, one that evolves with each deployment, officials said. Curry and Mendes noted that for neighbors who weren’t directly involved, it can feel strange to need help. However, there can be a pit-in-the-stomach feeling that remains days after everything has seemingly returned to normal.

It’s in those times that Curry or another NTT member, decked out in their blue ‘Neighborhood Trauma Team’ T-shirts, might be found walking down the sidewalk with a brochure and a survivor’s mentality to share with neighbors who are having trouble coping. It’s a sad situation to be out there, Curry said, but it can be a victory to help folks heal.

“I want the community to know the city cares,” she said. “I would feel good if someone left this on my door. It communicates that there are people in the community that care and want to support you. No one has control over violence, but we do our best to intervene and prevent it. We can love our community by helping them heal.”

The Codman Square NTT is based out of the Full Life Gospel Center on Norfolk Street and has office hours there on Thursdays for anyone who wishes to talk or get information. To get in touch with someone 24 hours a day, call the Trauma Hotline at 617-431-0125.