Dorchester Councillor Frank Baker eyes four historical maps, laying out City Council boundaries over the decades. Baker has railed against some of the proposals redrawing the boundaries, with one pushing his northern border into Copley Square. Gintautas Dumcius photo

Unhappy with his city council colleagues’ efforts to redraw the political boundaries of the nine City Council district seats, Dorchester Councillor Frank Baker said he plans to file his own map.

The councillors and their four at-large colleagues are facing a Nov. 7 deadline to get a map in place a year before the 2023 municipal election. Three maps have already been proposed – by district members Liz Breadon and Brian Worrell, district members Ricardo Arroyo and Tania Fernandes Anderson, and Councillor At-Large Erin Murphy.

Each map takes a slightly different approach to the redistricting effort, which occurs every ten years, driven by the US Census. A population boom is driving councillors to move precincts out of South Boston-based District 2, which has to shed people, while Dorchester-based District 3 needs to gain some. 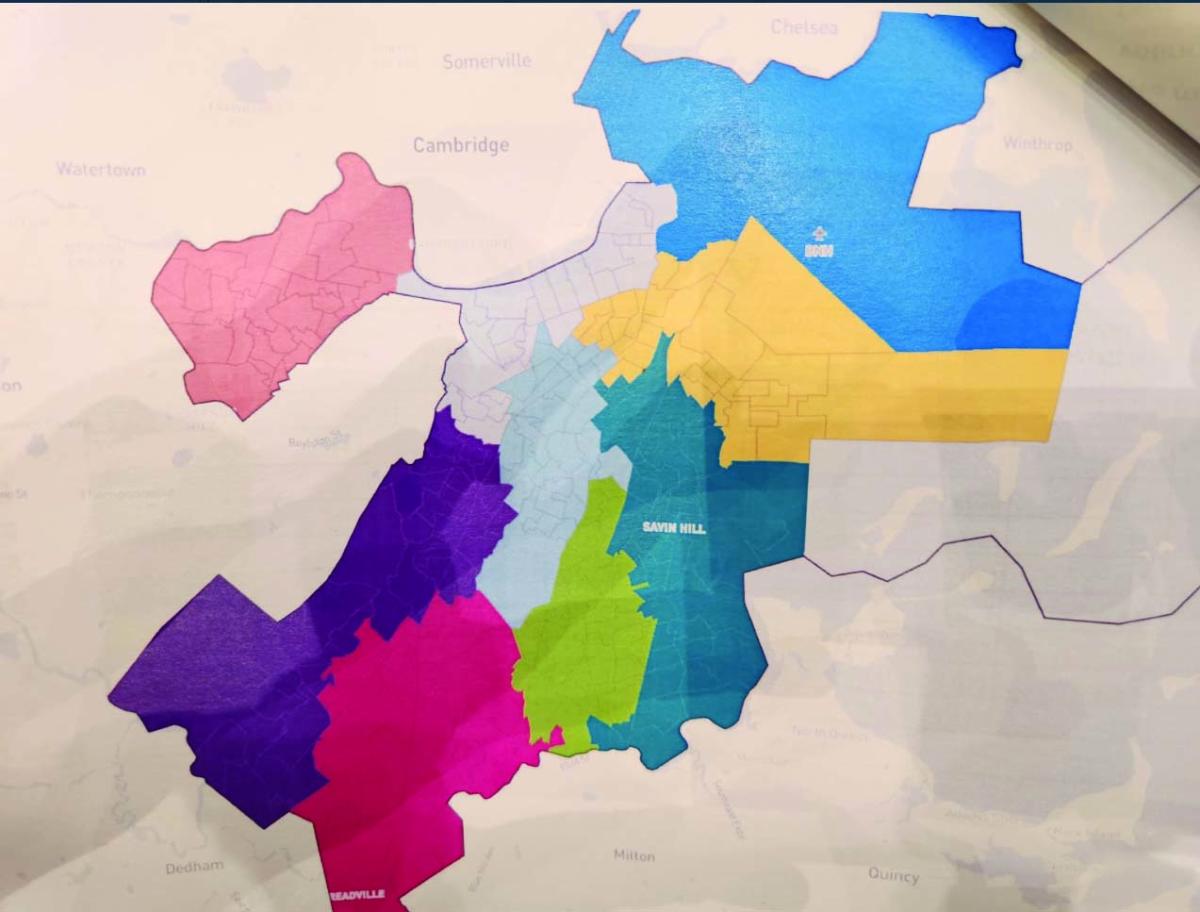 The Boston branch of the NAACP indicated on Tuesday it plans to present a map drawn with the help of other local advocacy groups.

Baker, elected in 2011, was present for the last round of redistricting, an exercise that left a bad taste in his mouth because his Dorchester-based district lost precincts, he said last Friday.

With Dorchester Avenue as the district’s spine, Baker said he plans to add to District 3 in his map the Fields Corner precincts that have a large Vietnamese population while keeping the Cedar Grove area, which other maps have proposed splitting between his district and District 4. Baker’s map also seeks to unite the South End within District 2.

The proposed maps already on the table move parts of Fields Corner into District 3, but split the precincts along Dorchester’s southern border between Districts 3 and 4.

At a redistricting hearing at City Hall on Tuesday evening, a State Rep. Dan Hunt, a Dorchester lawmaker, and the heads of local Dorchester civic groups asked for councillors to keep the Neponset neighborhood together in one district, while Maureen Feeney, the former city clerk and Baker’s predecessor who served for 17 years in the District 3 seat, made similar comments.

Mayor Wu, who would be faced with signing or vetoing any map that reaches her desk, has not publicly weighed in, but she has indicated interest in uniting the Vietnamese population in Fields Corner within one district.

Baker has previously called the map proposed by Arroyo and Fernandes Anderson a “non-starter” for him, because he disagrees with a District 3 plan that runs from the Neponset River up to Copley Square and seeks to pull together the Vietnamese community in Fields Corner with the Asian American Pacific Islander (AAPI) population in the South End.

Baker said that the redistricting in 2012 broke up Dorchester’s parishes and he wants to reunite them under one District 3, referencing the geographic boundaries established by the neighborhood’s heavily Catholic population in the 20th century. Over the last 20 years, the archdiocese of Boston, rocked by the child sex abuse scandal and shrinking funds, has closed churches and merged others.

“We have very clear parish boundaries that I believe should be respected,” said Baker, who grew up in St. Margaret’s Parish in the Columbia/Savin Hill area.

Councillor At-Large Julia Mejia said she is from St. Ambrose’s Parish, which is in Fields Corner, but “a lot has changed.” Black and brown residents don’t identify themselves to her as saying they’re from “such-and-such parish,” she said.

Jamaica Plain Councillor Kendra Lara said parishes can be considered communities of interest for the purposes of redistricting, both from a cultural and religious perspective, but they are “secondary and tertiary” to what the council is tasked with doing under the federal Voting Rights Act: Empowering racial minorities by creating electoral opportunities.

Lara also asserted that none of the maps seek to break up the South Boston neighborhood. Murphy said that was incorrect; her map takes two South Boston precincts out of District 2 and gives them to District 3.

Murphy also pushed back on another claim from Lara, made during a previous redistricting hearing, that the Murphy map would lead to the City Council getting sued if passed, arguing that it “packed” too many people of color into one district.

Murphy said her map, which attempts to unite Mattapan under one district, is legal because it does not weaken Black voting power, as voters there have for decades elected people of color, from Charles Yancey to Andrea Campbell, to Brian Worrell, who took office this year.

Arroyo said District 4 has to add white people, and they can’t go into his District 5, which includes parts of Mattapan, because the precincts on the border are made up mostly of people of color.

“We have to accept as a body that nobody’s going to love all of the lines of the district,” he said.