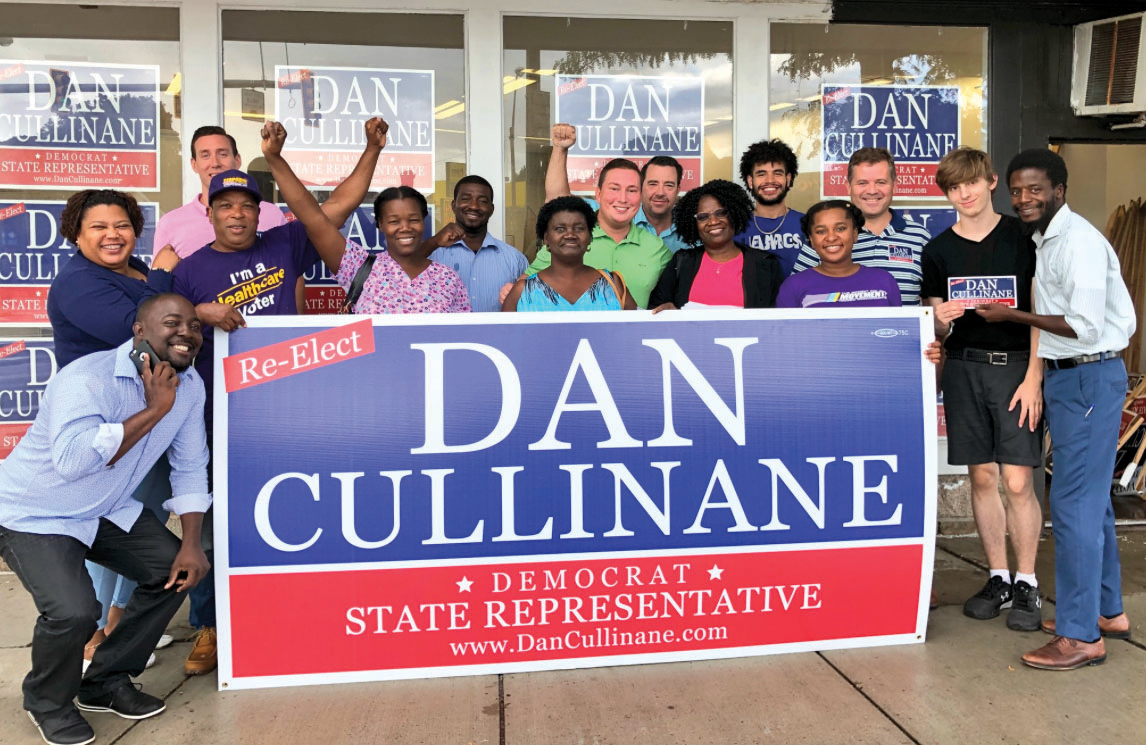 Higher profile races – including close contests for Suffolk County district attorney, Massachusetts secretary of state, and US Congress – are dominating most of the media attention in this primary election cycle. But voters will also be asked to make important choices about many so-called “down-ballot” races next Tuesday (Sept. 4). We hope that voters in Dorchester, Mattapan, and neighboring sections of the city will reflect on several of these races in the days to come.

Foremost among these is the 12th Suffolk state representative district, where incumbent Dan Cullinane is seeking his third full term. Cullinane has a solid track record on the local front, supporting smart development, affordable housing initiatives in Dorchester and Mattapan, and progressive advances at the statewide level.

Cullinane has drawn a challenger in Jovan Lacet, a Mattapan resident and attorney who also ran in 2016 and won 7 of the 17 Boston precincts that the seat encompasses. (There are also two precincts in the town of Milton.)

A former Boston Police officer, Lacet was fired from the department after he perjured himself in court during a trial involving his older brother, who was accused in a Mattapan homicide. His brother was acquitted, but Lacet was forced off the BPD in the wake of the verdict. When the Reporter included these facts in our reporting of the race in 2016, Lacet — who sought to keep that part of his past quiet as he sought votes—was furious.

Neither he nor his campaign has responded to the Reporter’s repeated requests for information in this election season about his positions on many of the pressing issues that informed voters would like to know about. And since no other news outlets have bothered to cover the race, there’s really no way of knowing what he would do on a large number of local issues. That’s a troubling trait for any potential elected official to have, and it should give voters pause.

There’s no such ambiguity or opaqueness when it comes to Rep. Cullinane, who has been eager to share his record on matters at the state level and here on the homefront. Cullinane has taken a leadership position on advocating for transit equity on the Mattapan trolley and the Fairmount Line. He’s a vocal proponent of common sense gun control and criminal justice reform and he was a key partner in completing the Neponset Greenway connection that has become a jewel in Mattapan and Milton.

But it’s Cullinane’s role in pushing for new, mixed-use developments in his own district that has impressed us the most. Cullinane was a pivotal player in persuading the MBTA to seek development partners for the parking lot on River Street that will soon become a mix of housing and commercial space in Mattapan Square. Cullinane interrupted a misguided MBTA plan to sell that same lot to a charter school and insisted that the T instead seek a better and higher use for the site. The result of his leadership will be transformative for the square, which desperately needs a bigger share of Boston’s ongoing boomtime.

Cullinane was also a key advocate for building a new station on the Fairmount Line at Blue Hill Ave— which is now under construction. He faced off against NIMBY naysayers— including Lacet— who opposed an affordable housing, mixed-use development at the old Cote Ford site on Cummins Highway. Thanks to Cullinane and the many neighbors who correctly saw the upside of building on a long-vacant and abandoned lot, the site will soon be home to dozens of families and will no longer be an eyesore. Cullinane took flak for his position from abutters— but he did the right thing for the larger district and should be commended.

Dan Cullinane has done the work and understands the needs of this diverse, hardworking city-suburban district. In this election, he is the clear choice. The Reporter strongly endorses his candidacy for re-election.