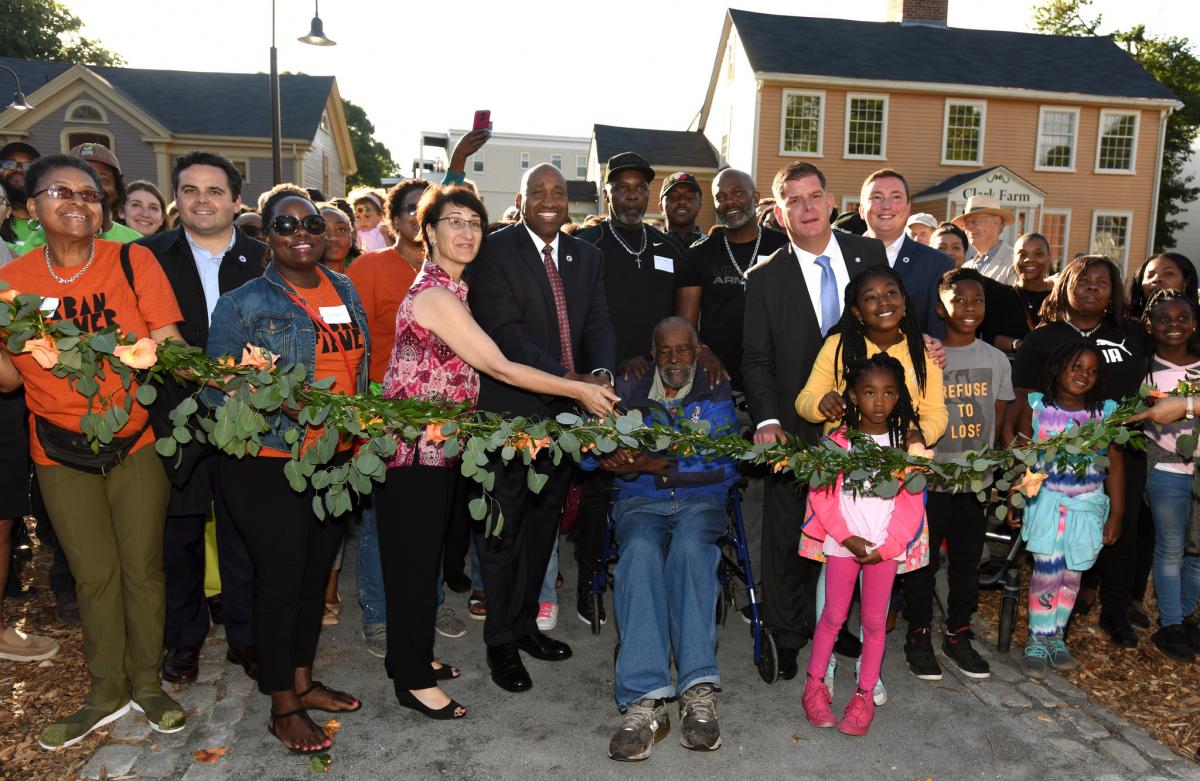 Mayor Walsh joined the celebration at the Fowler-Clark farm on Monday. Photo by Isabel Leon/Mayor's Office

City government is often a convenient culprit, blamed for the everyday woes of neighborhood life, often without a fair hearing. So, let’s give credit where credit is due: Monday evening’s celebration of the remarkable restoration of the Fowler-Clark Farm on Norfolk Street would not have been possible without the stubborn insistence of city of Boston officials who went to great lengths over many years to protect this precious link to our past.

Once a sprawling, 330-acre farm dating back to the 1780s, the remnants of the Clark-Fowler property—a two-story farmhouse and an adjacent barn on about 30,000-square-feet of land — had become a chronic eyesore and public nuisance by the late 2000s. City officials, at the direction of Mayor Thomas M. Menino, were frequent visitors to the site, called there by neighbors concerned about squatters, dumping, overgrown weeds, and general decay— the kind of issues that any neighborhood wants addressed. It was particularly distressing because the property itself was listed on the city’s registry of historic landmarks. The Dorchester Historical Society included it prominently on its annual list of important but “endangered” neighborhood sites.

It was a complicated problem, since the land was locked in a trust and embroiled in a dispute among heirs of the last owner. The impasse created such headaches for city officials that the city’s Department of Neighborhood Development (DND)— on Menino’s orders— took the highly unusual step of seizing the property in the summer of 2013 for failure to pay for utility bills and city taxes.

Sheila Dillon, who is still the city’s chief of housing and DND, was clear that the city would not allow the Fowler-Clark properties to fall into irreversible disrepair.

“The action we’re taking here today is the same we would take if someone was threatening it with a bulldozer,” Dillon told the Reporter at the time. City lawyers battled the estate in court and eventually forced a sale.

Since then, new partners have taken up the cause, most notably Historic Boston Inc., The Trust for Public Land, the Urban Farming Institute of Boston, and the North Bennet Street School, all of whom teamed up over the last three years to carefully restore the buildings and land at a cost of $3.7 million. In an innovative twist, the property will once again be a working farm with raised planting beds that will be used to train city residents on how to cultivate crops in their own yards.

The house itself will be a residence for the Urban Farming Institute’s on-site farm manager. There are plans to add a $300,000 greenhouse in the near future.

On Monday, Mayor Walsh thanked neighbors for pressing the case over the years: “What we’re looking at – the community helped shape the vision,” he said.

He’s right of course. But, without a commitment from city government to stop the former owners from allowing it to collapse— and to make sure it ended up in responsible hands— this story would have a very different ending. There’s a lesson in that: Our leaders are called upon to balance the growth of a booming city with the sometimes fragile and complex remnants from a fast-fading past. Good government is able to do both— and in the case of the Fowler-Clark farm on Norfolk Street— that’s just what’s been accomplished. Bravo!