US Senator Elizabeth Warren addressed a range of national and local issues at a Thursday evening town hall sponsored by the Dorchester Reporter. A crowd of 400 people at the Boston Teachers Union hall on Columbia Point listened and engaged with the state's senior senator as the Reporter's news editor Jennifer Smith moderated the forum and asked questions. A video of the town hall can be viewed here.

Warren fielded questions from the audience on topics ranging from health care for veterans and affordable housing to whether she thinks President Donald Trump should be impeached.

"This is serious business," Warren said when answering the impeachment question. "Right now I believe it is absolutely critical that the special counsel, Mueller, be allowed to complete his investigation in full with no interference form anyone, Democrat or Republican, and make a full report, We need to see what his report says and then we take whatever are the appropriate next steps."

Jennifer Smith of the Reporter pressed Warren to explain her plan to address gun violence, the national opioid crisis and climate change.

Warren gave new details on a just-emerging bill that she plans to file today with US Rep. Elijah Cummings (D-Maryland) that would pump $100 billion into a federal assault on opioids— an approach that Warren likened to the nation's eventual strategy to combat the HIV/AIDS epidemic in the 1980s.

"We want to put enough money in not to nibble around the edges, but make a transformative difference. What we are going to propose tomorrow is that the federal government put $100 billion over next ten years— that's $10 billion a year— in to treating the opioid crisis in this country. And we want to make this money available to the states," Warren said. 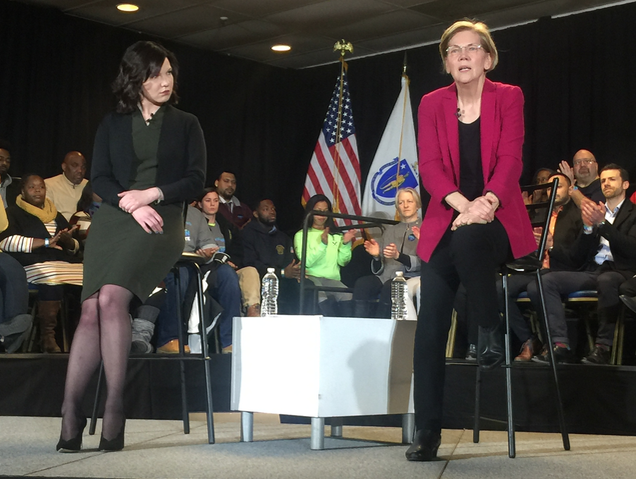 Above, Sen. Warren (right) and Jennifer Smith of the Reporter.

Warren will appear on the state primary ballot on Tuesday, Sept. 4, the day after Labor Day. The final election is set for Nov. 6. Warren holds a hefty lead over her three main Republican challengers, according to recent polls.

Smith asked Sen. Warren if she intended to serve the full six year term if re-elected.

"That's certainly my plan," she said.