Mfalme Kenyatta in his studio at the Erick Jean Center for the Arts in Four Corners. Photo by Earnest X.

Dorchester-based artist Mfalme Kenyatta has no qualms about assigning eyebrow-raising value to his own art. The painter/sculptor/fashion designer, who compared himself to Picasso and Basquiat in an interview with the Reporter, has priced some of his paintings at millions, even tens of millions of dollars on his website.

By way of explanation, Kenyatta offered an example of a painting he saw at a contemporary art museum — a canvas painted solid red — that sold for $30 million. Why shouldn’t he treat his own art the same way?

“I don’t really feel that anyone can tell you what something is worth,” he said. “Not an appraiser, not a curator. It’s like, I made it, I know how long it took, I know what type of paint this is, I know how long it’ll last...as an artist, that comes from us.”

Support local journalism. Subscribe to the Reporter today! It's just $30 for home delivery for the whole year!

It’s a bold stance, but Kenyatta believes the truth inherent in his artwork supports his confidence. He considers each of his paintings to be "one of one," trusting that their value comes from their uniqueness. “I look at it like every painting is like a piece of my soul. That’s how I approach it. And I’m always met with like, oh, you have to famous or dead to do that [with pricing]. But you know, fame doesn’t change your artwork.” 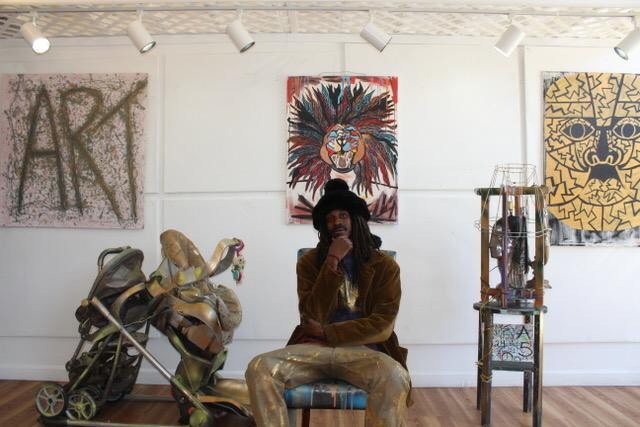 At the moment, Kenyatta is concerned less with fame and more with sparking a renaissance of black artists in his neighborhood. He works from his studio in the basement of the Erick Jean Center for the Arts in Four Corners, a space that is quickly becoming the new center for black art in Boston, according to Kenyatta. He describes the property, which is shared by the Afro-Caribbean Museum and the Dorchester Arts Collaborative, as “the heart” of the local creative black community.

“For black artists, there’s not really too many options. They just closed AAMARP,” he said, referring to Northeastern University’s African American Master Artist-in-Residence Program, which had been under fire since last summer when the university threatened to force the black arts collective to vacate its premises due to safety concerns in the warehouse that housed it. With safe spaces for black artists imperiled elsewhere in the city, Kenyatta sees his home base as a welcoming, if under-the-radar, sanctuary.

“Something important that people need to realize is that there’s not too many options for us. That’s why here we’ve really been trying to cultivate that culture.”

The artistic presence at the Four Corners hub is growing, notably in the form of the “Indigo Regime,” a contingent of roughly fifteen artists from the area who gather in the museum to work and host shows.

Kenyatta stressed the crucial role of the arts center in “making sure that there’s a platform for black artists, because there’s a lot of artists around here, and I feel like if it wasn’t for this space, we wouldn’t even know. Me, personally, before this opened, I used to just walk around, pretty much. I had the talent, but I didn’t have the platform. And when I started thinking about it, there’s probably a lot of people like me who have talent but no outlet for it.”

Thanks to his Four Corners outlet, Kenyatta has spent the last several years honing his craft. He will present his second solo show at the museum’s gallery on May 2 as part of ArtWeek, a statewide creative festival.

When he’s not painting, Kenyatta is often out scavenging along the sidewalks of Dorchester for scraps of metal and plastic that he then uses to create found-object sculptures. Lawnmowers, bicycle wheels, and tires are all candidates for artistic repurposing.

One of Kenyatta's found object sculptures.

“With the sculptures, sometimes it came from a place of lack,” he said. “You know, like not having. Sometimes I didn’t have materials to paint canvases or maybe didn’t have the particular paint or colors I wanted, so I just switched over to that.”

Another medium Kenyatta has crossed over to is clothing design. In that process, he usually begins by purchasing clothing wholesale. “If you buy clothes wholesale, it’s not really branded, you know what I mean? You can brand it yourself. I look at it like canvases. That’s really how I look at clothes, like a walking canvas.”

He often adorns his “walking canvases” with historical and religious symbolism, flicking splotches of paint at jackets and t-shirts until they become works he can call his own. 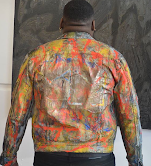 One of Kenyatta's "walking canvases."

Elsewhere, residents can spot Kenyatta’s brushstrokes at public art murals in Four Corners, Grove Hall, and on Dudley Street, as well as on a trio of painted mailboxes in the neighborhood.

Currently, artists of the Indigo Regime are exploring fundraising efforts in addition to their creative endeavors. Some crucial donors to the arts center recently pulled their funding, says Kenyatta. Those cuts mean a constant struggle to make ends meet for the nonprofit, but he dismissed any threat of closing as an impossibility.

Support local journalism. Subscribe to the Reporter today! It's just $30 for home delivery for the whole year!