The Walsh administration last week issued a report outlining how Boston intends to shore up coastal protections and re-think development along Dorchester’s waterfront in the coming years and decades as sea levels continue to rise due to climate change.

The 174-page document – “Coastal Resilience Solutions for Dorchester” – is a comprehensive summary of the Climate Ready Dorchester initiative. It also acts as a “roadmap for near- and long-term solutions to help make Dorchester more resilient for many years to come,” according to Mayor Walsh.

The report’s top objective is the creation of a series of “risk reduction solutions for coastal flooding and rising sea levels,” projected out to 2070. The outlined solutions – from elevated roadways and flood gates to other measures – make assumptions based on scientific models that project a dramatic rise in sea level as high as 9 inches in the next decade and up to 40 inches over the next 40 years.

The estimated cost of implementing the solutions ranges from $111 million to $215 million, depending on the choices made going forward by city and state officials.

There is a sense of urgency to some of the needed repairs and infrastructure. The report notes that storm events and high tides already are regularly inundating sections of the neighborhood.

By the 2030s, the report anticipates that enhanced impacts to Port Norfolk, Neponset Circle, and Morrissey Boulevard – sections that already experience consistent storm overflows – will see more and stronger calamities, with “approximately 409 buildings” at risk as “flood pathways” expand. By 2070, the report envisions higher risks further inland, in places like Adams Village, Clam Point, the Bayside section of Columbia Point, and Pope’s Hill.

Infrastructure along the coast— from roads and rails to the stormwater system— would be “overwhelmed” if left in place as they are today, to which the report outlines measures that can mitigate the risks.

Landscape berms, flood walls, elevated walkways and road systems, and tide gates could be employed, along with adapting existing buildings to raise entrances and utilities out of harm’s way. Another option: “strategic retreat,” defined in the study as “a phased process of removing or relocating existing buildings and preventing future development in vulnerable areas.”

The report also introduces a new concept —“The Dorchester Shoreway” — a term used to define the neighborhood’s 9.5 mile coastline that the authors envisions transforming from a series of distinct, “disconnected” spaces into “one coherent, linked destination for all Dorchester residents and other residents of Boston.”

The Shoreway’s eventual completion is aspirational. Several major projects itemized in the report have not yet been funded or fully planned out, including, among other things, a redesign to elevate and modernize Morrissey Boulevard, a state-controlled road system. Plans to move ahead on a rehab of Morrissey have been stalled in recent years.

Other projects named as critical:

• Connecting the Neponset Greenway to the Harborwalk with a “missing link” section between Tenean Beach and Victory Park.

• The transformation of the 60-acre Moakley Park into a resiliency centerpiece – also not yet fully funded and still in design phase.

One fact highlighted in the report speaks to the limits of city government’s powers and the necessity for a well-coordinated approach to make the climate plan viable: land ownership.

Of the 9.5 miles of shoreline that constitutes Dorchester’s waterfront, 7.2 miles are owned by the state, not Boston, which controls 0.3 miles of the coast. 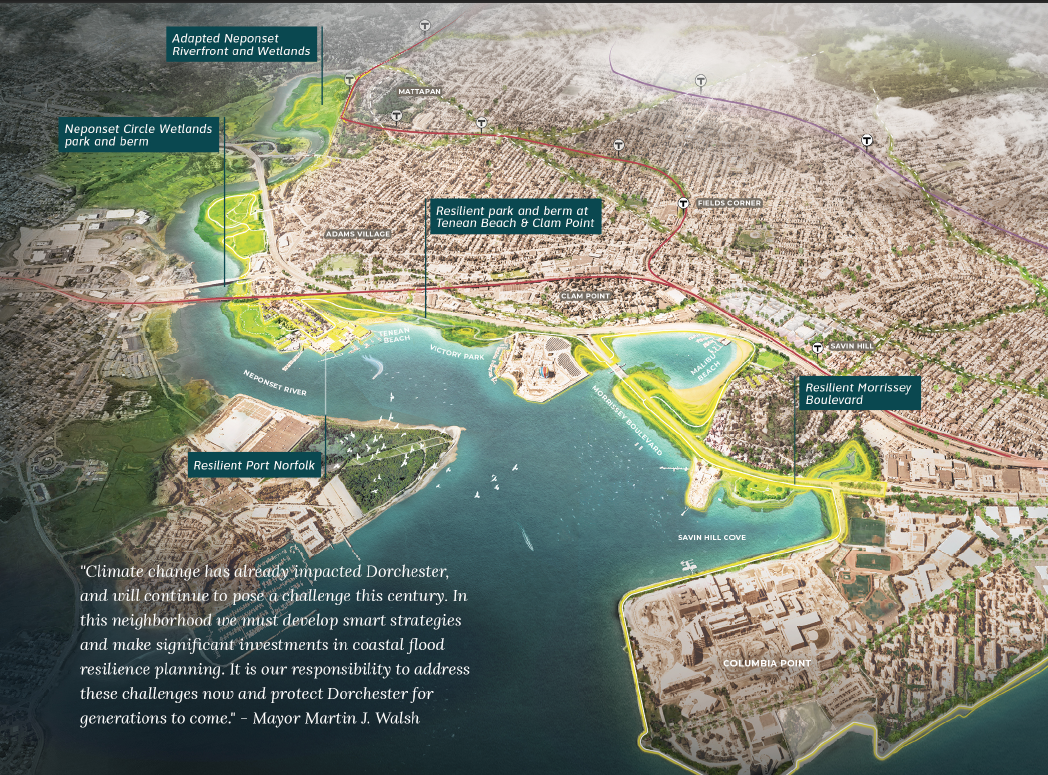 With respect to Morrissey-Columbia Point, the report leans heavily on redevelopment projects at Bayside (Dorchester Bay City) and Moakley Park to provide new infrastructure that would act as bulwarks against floods into the surrounding neighborhoods, saying:

“When completed, the flood pathways at Moakley Park and Bayside will be closed with a series of connected flood protection strategies.”

These would include a landscaped berm around Moakley; raising the elevation of the existing Harborwalk around the perimeter of Columbia Point; and raising curbs around McConnell Park in Savin Hill.

Along Morrissey Boulevard, planners call for the roadway itself to be elevated to as high as 16 feet. Tide gates and berms would also be constructed to regulate water levels in Patten’s Cove, the wetland between Columbia Point and Savin Hill. The cost for the various versions of the plan just for Morrissey and Columbia Point: between $55.6 million and $90.9 million.

The Tenean-Clam Point segment would have landscape berms and a waterfront boardwalk to connect the Greenway to Morrissey’s Harborwalk, along with a floodwall along the Red Line tracks and the raising of Conley Street to 12.5 feet. This phase, budget writers estimate, could cost between $16.6m and $39.2 million.

Port Norfolk, home to a mix of residents, businesses and public amenities, is already experiencing routine flooding and is highly vulnerable to worsening conditions. In addition to berms and flood walls, the report sees the raising of roads and even existing buildings to prevent their destruction as sea levels continue to rise. The estimated cost outlined for just Port Norfolk protections: $20.5 million- $65.7 million.

Near Neponset Circle, raising the Harborwalk along Pope John Paul II Park and adding new berms and wetlands will be needed, along with tide gates and a floodwall to block flow into Neponset and Adams Corner, the report says. It will cost between $10.8 million and $14 million for work on this segment.

The final stretch— between the dam in Lower Mills to Pope John Paul II Park— is the least costly to protect, at between $800,000 and $1 million to raise the Greenway trail, add a berm park near Granite Avenue , and adapt building levels for vulnerable homes near St. Brendan’s parish and Cedar Grove.

A timeline outlined in the report anticipates more “near-term” action on high-risk sections of Morrissey Boulevard before 2030. State agencies— the Dept. of Conservation and Recreation (DCR), the MBTA, Mass Dept. of Transportation and UMass — are key stakeholders. “This means,” the authors note, “that collaboration and coordination, particularly with the Commonwealth, will be essential to the successful implementation of coastal resiliency solutions.”