Matchado Baptilus and Bernardo Ortiz take a break after toiling on The Peaceable Kingdom Mural. Over the course of two years, 40 student-artists have joined together to create this masterpiece which opens the doors to paradise at Boston International High School Newcomers Academy.

A school on the top of one of those hills named the Boston International High School Newcomers Academy (BINcA) was set up in 2011. Before that it was the Frank V. Thompson Elementary School, built in 1922. Old maps of Ashmont Valley show that nothing was ever built on this hill except this 98-year-old school building.

Ashmont Valley had been farmland, a fine topography for cultivation by Puritan and Yankee farmers as well as the original inhabitants who had lived here for millennia. The native people had touched deep reserves of history as they stood where we stand, under the same sun and moon that shine down on us. The native people blended into nature and lived among animals in harmony with the land throughout all the seasons.

BINcA student-artists are plying those same ideas now as they paint a mural about nature “nature-ing.” The name of the mural is The Peaceable Kingdom. It represents a scene in which numerous animals are crowding an expansive landscape while living in total harmony.

The human form has no place in the design, but footprints will be added in the foreground at the very end. These footprints will represent the viewer and also guide him or her into the center of this picture of paradise.

Large scale collaborative art projects evolve slowly, much like gardens that need lots of time to spread out and fill in. Artists are the gardeners who do the watering, pull out the weeds, and dream about which seeds to plant next.

Working at their desks, students made drawings from photographs of animals. The finished drawings were then painted in full color. When satisfied, the students enlarged their drawing on the mural and painted the animal again. It went that way for every animal on the mural, which is why it has taken two years to complete. 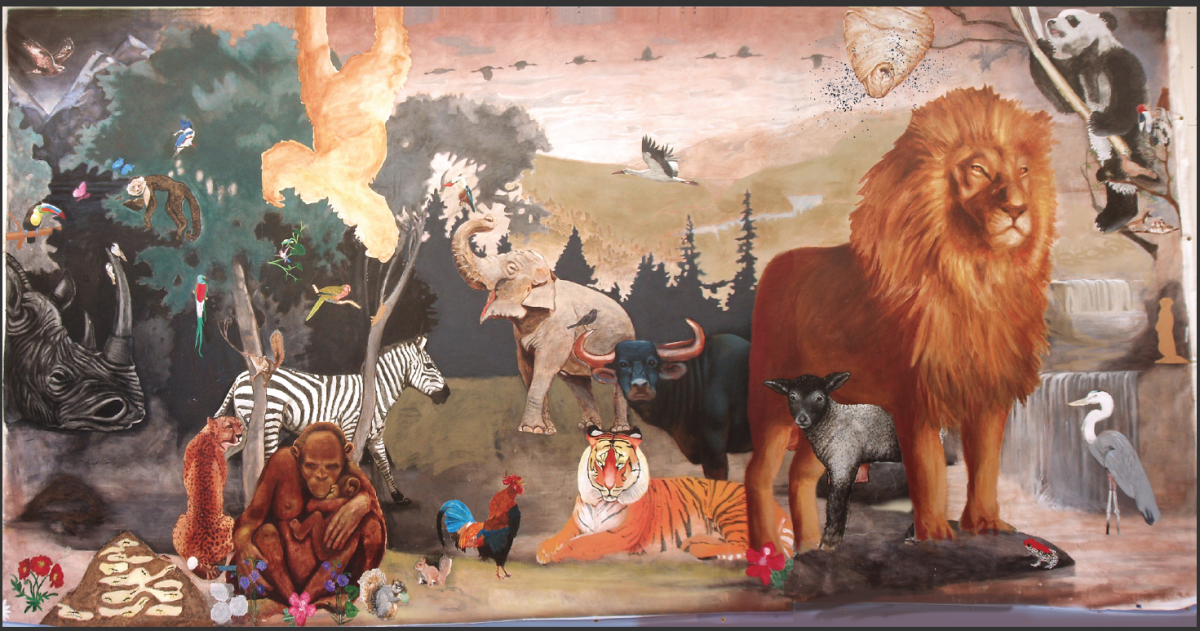 A big lion is the focal point of the mural, put there because it is the school mascot. A year later, a little lamb was added on the same spot. The striking contrast of scale between these two creatures catches the eye and suggests something that happens to reflect our current situation.

“In like a lion, out like a lamb” has to do with defrosting March weather and also with bright shining stars. Every March, the Leo constellation (lion) is followed by the Capricornus constellation (lamb). This March, COVID-19 swept across the world and stopped us in our tracks. Now we are ready to begin healing. The proverb brings to mind that the limitation of moving like a lion is only overcome by following the lamb. 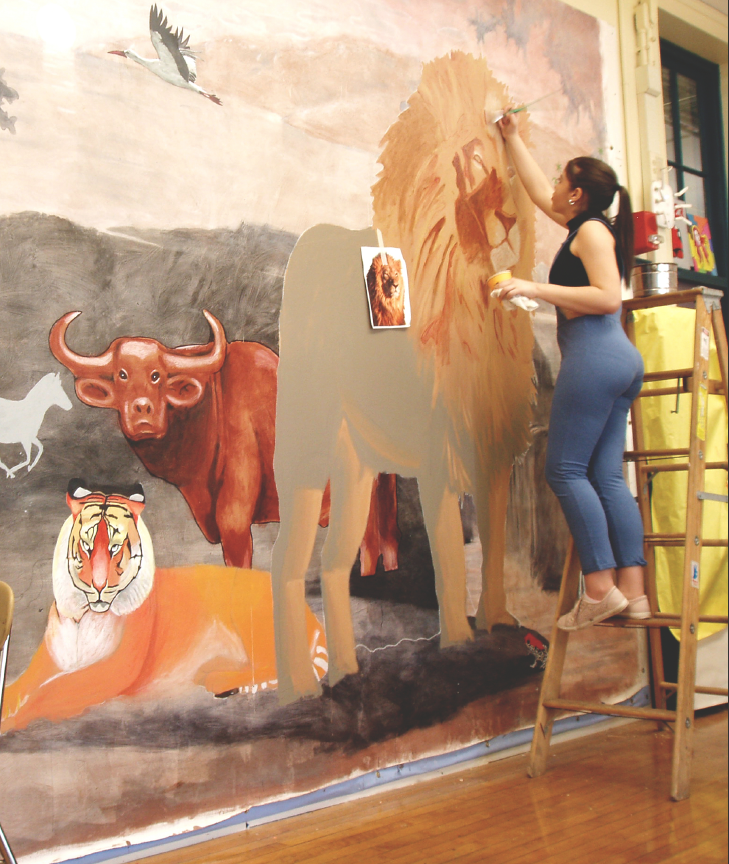 Above, Rachelle Tavares works on the mural.

Somebody smart once said, “Strength lies in differences, not in similarities.” Dorchester people have experienced close quarters with all kinds for so long that we have learned how to never stop trying to make things better. One of the most important things we do is working together to empower young people because they are our future.

BINcA is the only Boston public school with 100 percent immigrant students. The Peaceable Kingdom Mural Project has brought together a great and diverse team of young people to communicate with one voice in sending a message about integrity, equality, simplicity, community, stewardship of the Earth, and peace.

Working to paint this mural has given BINcA students an opportunity to help improve the quality of life in Dorchester. And now these same young people are ready for more. They are listening for a positive response, which will build their confidence and strengthen their resolve to step up and serve as role models in our community.

The mural has community support and is ready for installation in a public place. A proposal is currently under review by the Massachusetts Bay Transportation Authority Temporary Youth Mural Program. It was submitted by the Peaceable Kingdom Mural Committee and includes letters of endorsement from elected officials and local civic groups. The proposed location for the mural is the T’s Ashmont Station. 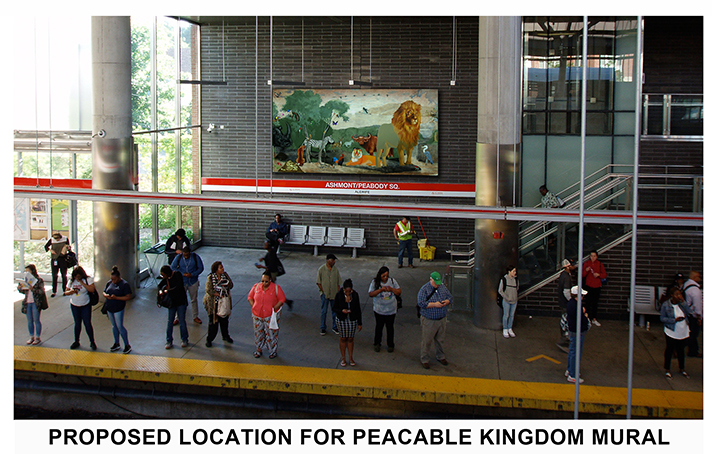 The mural could be installed above the platform for the inbound trains, where it would be seen and enjoyed by thousands of people who pass through the station every day. Imagine the reaction of student families, friends, and neighbors when they encounter this beautiful work of art. The impact that this would have is pure gold – the use of art to revitalize community and contribute positively to our sense of place. (It also would give one more good reason for riders to be thankful for the MBTA.)