(Updated, Fri., June 5, 4:30 p.m.)— Members of UMass Boston’s faculty union raised objections and demanded answers from university leadership this week after parts of the campus were used as staging areas and parking for State Police before a large rally and vigil in Dorchester on Tuesday.

The criticism prompted a response from UMass Boston's top administrator on Thursday that began: "I write to tell you that the state police presence on campus has ended."

The decision to bar state police from using the campus later drew a sharp rebuke from the State Police Association of Massachusetts, which called the ban "shameful."

Photos and video taken by a student showed scores of police officials in formation in the Bayside parking lot on Tuesday in space that is normally filled with UMB student and faculty vehicles during the school year. Other photos showed police vehicles parked beside the university’s West Garage and a line of MBTA buses parked near the university’s Campus Center. 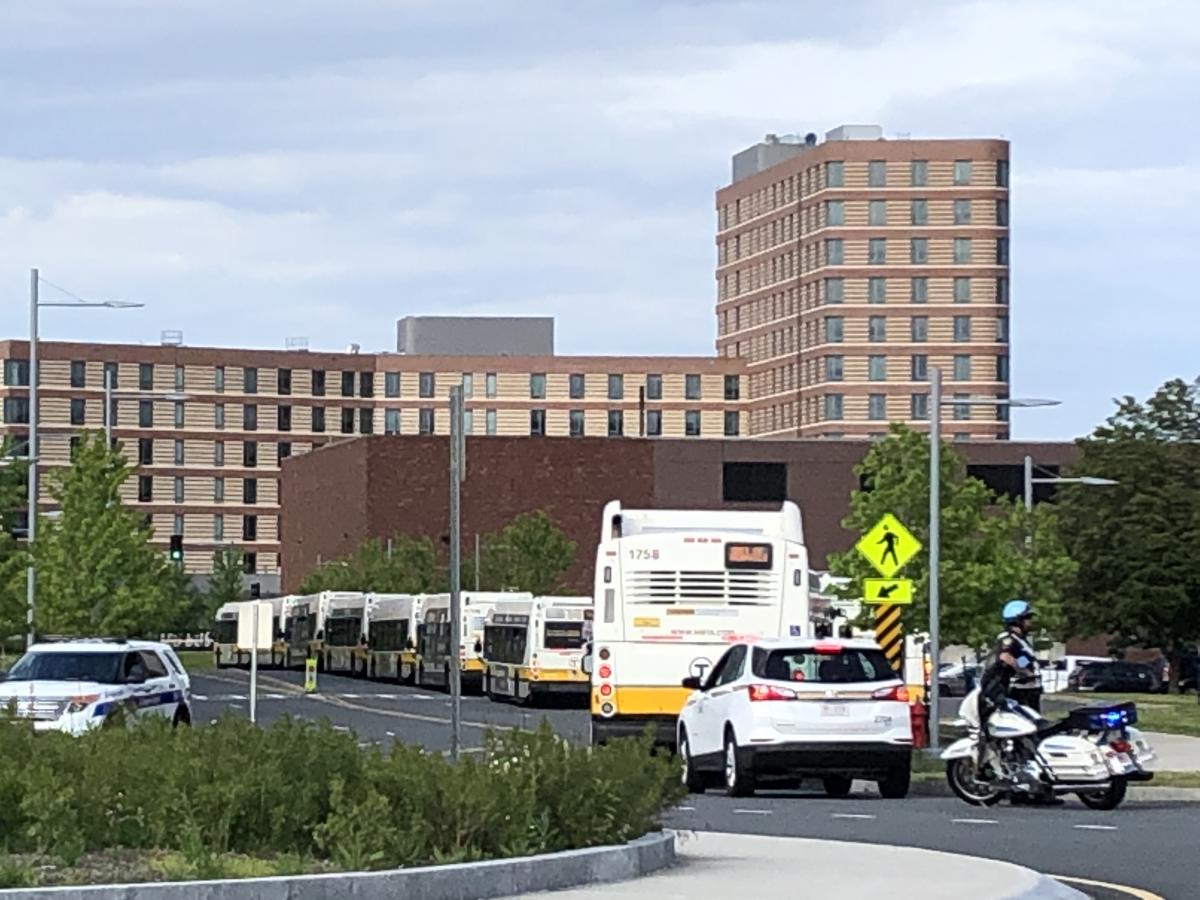 Heike Schotten, chair of the Faculty Council at UMB, told the Reporter the police presence provoked strong reactions from her colleagues, prompting them to email university administration for an explanation.

In a letter sent to the UMass Boston community on Thursday evening, interim chancellor Katherine Newman explained what happened and said: "This presence should not be understood by anyone as tantamount to endorsing police misconduct." Newman wrote that "the state police presence on campus has ended," and explained that the university has had a "long-running practice" allowing them to use campus grounds.

"The campus was tapped for access to parking space in accordance with a long-running practice among the commonwealth’s public safety agencies of providing mutual support," wrote Newman. "It has been similarly used in the past for events such as the Boston Marathon, the women’s march, sports victory parades, and President Barack Obama’s visit to Boston when the city was crowded and in need of overflow parking for police agencies. This presence should not be understood by anyone as tantamount to endorsing police misconduct."

“We’re a majority minority campus, we’re literally in Dorchester, we draw so heavily from communities of color for our students and our staff,” Melnick said. “Given our urban mission, which is to be a part of and a servant of the communities we’re embedded in, how can we participate in making it more possible for the police to train and stamp hard on these protests that are about people of color and black people being the object of police violence?” 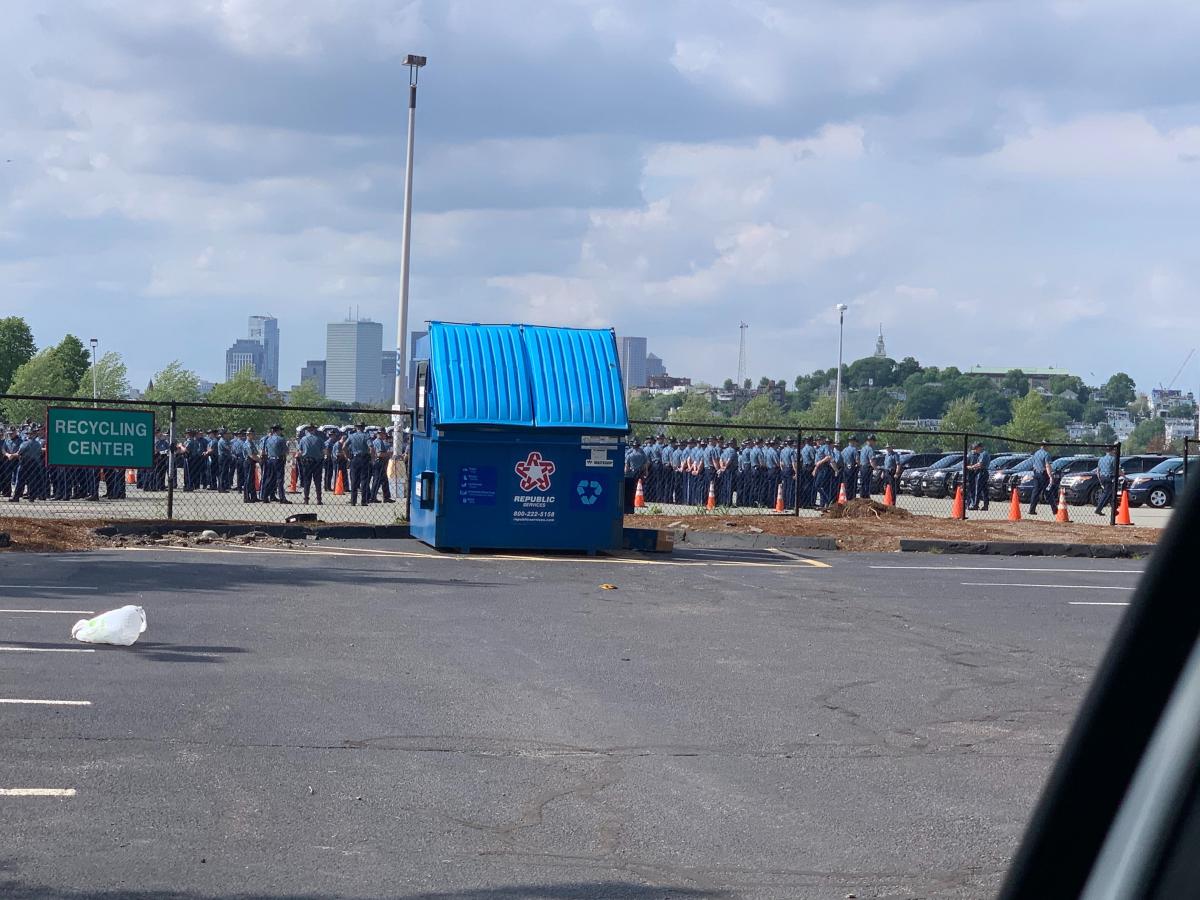 A photo appears to show Mass. state police and vehicles gathered in the Bayside lot.

In video footage posted to Twitter, state police officials could be seen practicing what appear to be riot control measures in the Bayside lot on Tuesday, hours before a planned peaceful protest in Franklin Park.

In her June 4 letter, Newman went on to acknowledge that "for people who have historically, systematically, and even routinely been victims of police misconduct, the presence of such an intimidating display of police power is unnerving. For that reason, it can also serve as an implied deterrent to the right to protest that is a foundation on which the nation was built."

Baynard wrote that he is implementing a "Police Community Advisory Board" consisting of students, faculty, and staff that will be "a vehicle to enhance the relationship and communications between our Department and the university community. We can use this group to discuss national topics and more importantly, we can use it to come together and affect change."

"This presence was not in response to any campus conditions and is not part of any long-term plan. We strongly support our students, faculty, and staff’s First Amendment right to free speech and the right to peacefully assemble," Baynard said.

On Friday afternoon, the State Police Association of Massachusetts issued a statement that said UMass Boston had "barred the use of its campus as a parking area for police, claiming that it is an intimidating display of police power and can serve as an implied deterrent to the right to protest."

The statement included a defense of the State Police, noting that: "We have stood with many peaceful gatherings of concerned citizens as they march to advocate for change to not only our justice system, but to how our nation as a whole dissimilarly treats its citizens. As to the events that were the catalyst for where we are today, let us be very clear: The State condemns the abuse of power by police officers. Our members joined the State Police to uphold the law and keep people safe. Overwhelmingly, these Sergeants and Troopers do so with courage, integrity and professionalism."

In the statement, the State Police Association called the UMass decision "shameful" and said it "overtly pander[s] to the false rhetoric and anti-police agenda of the few."

"More important, they fail to support our defense of the peaceful calls for change of the many. These actions place needless hurdles to the protection of life and property, and they put the public at large at risk," read the statement from the association. "Our members put their lives on the line every day to uphold the First Amendment and to ensure peace. We will continue to do so in these very troubling and challenging times."