Activist Monica Cannon-Grant talked to reporters in front in Nubian Square after the verdicts on Tuesday. “There are so many families that didn’t get the justice the Floyd family got,” she said. Jesse Costa/WBUR photo

As the guilty verdicts against former Minneapolis police officer Derek Chauvin for the murder of George Floyd came down Tuesday, activists, organizers and politicians in Boston celebrated it as a step toward justice — while messaging that there was more work to be done.

Acting Mayor Kim Janey, the first person of color to lead Boston, said though there is a relief in the verdict, Floyd and countless other victims of police violence are still dead.

“And the conditions that led to so many senseless killings still exist,” Janey said during a press conference Tuesday evening. “While I am truly grateful for a guilty verdict, I know that our work in our city — and in every other city across America — to advance racial justice continues.”

She noted her own lived experience, as the grandmother of teenage boys. And as a Black woman “who has felt the need to tread lightly in a world that criminalizes my Blackness.”

Suffolk County District Attorney Rachael Rollins joined Janey at the press conference. She said she was grateful for the jurors and the prosecutors, but especially for the police officers who testified against Chauvin.

Rollins said she is optimistic that society will “transform and reimagine how we create public safety.” She called on protesters in Boston to demonstrate peacefully. And she asked for empathy from police officers.

“For my brothers and sisters in law enforcement who may be called out because of demonstrations, I ask that you try and understand the immense pain and trauma, frustration and anguish some of us are feeling,” she said.

“Hopefully it opens the door toward more prosecutions,” said Brock Satter, a member of Mass. Action Against Police Brutality. The organization calls for the prosecution of police officers who kill people, and the reopening of past cases of police violence.

Satter called the verdict a victory for the broader protest movement against police brutality, and pointed toward the swift arrest of Kim Potter, the now former officer in suburban Minnesota charged with manslaughter last week after she shot and killed Daunte Wright during a traffic stop.

“There’s a sense that they don’t want to see those 30 million people out on the streets,” Satter said, referencing the mass movement sparked by the death of George Floyd last May.

[InWashington, Congresswoman Ayanna Pressley issued a statement saying, “Despite today’s guilty verdict, this system can never deliver true justice for George Floyd and his family. True justice would be George Floyd, alive today, at home with his fiancé, children, and siblings.

“The truth is that we never expected justice from this trial. We demanded accountability. Today, a jury delivered accountability and Chauvin will face consequences for his actions.

“To be clear, the legal system in America remains deeply unjust. No one should die the way George Floyd did. A person’s murder should not have to garner global attention to result in accountability.

“We can’t bring George Floyd back, but we can, and we must, legislate to deliver the critical resources our communities need to be freed from the endless loop of trauma we are experiencing daily.

“I will continue my work to end qualified immunity, the fundamentally unjust legal doctrine that has allowed so many who commit egregious acts of state-sanctioned violence to evade accountability.” 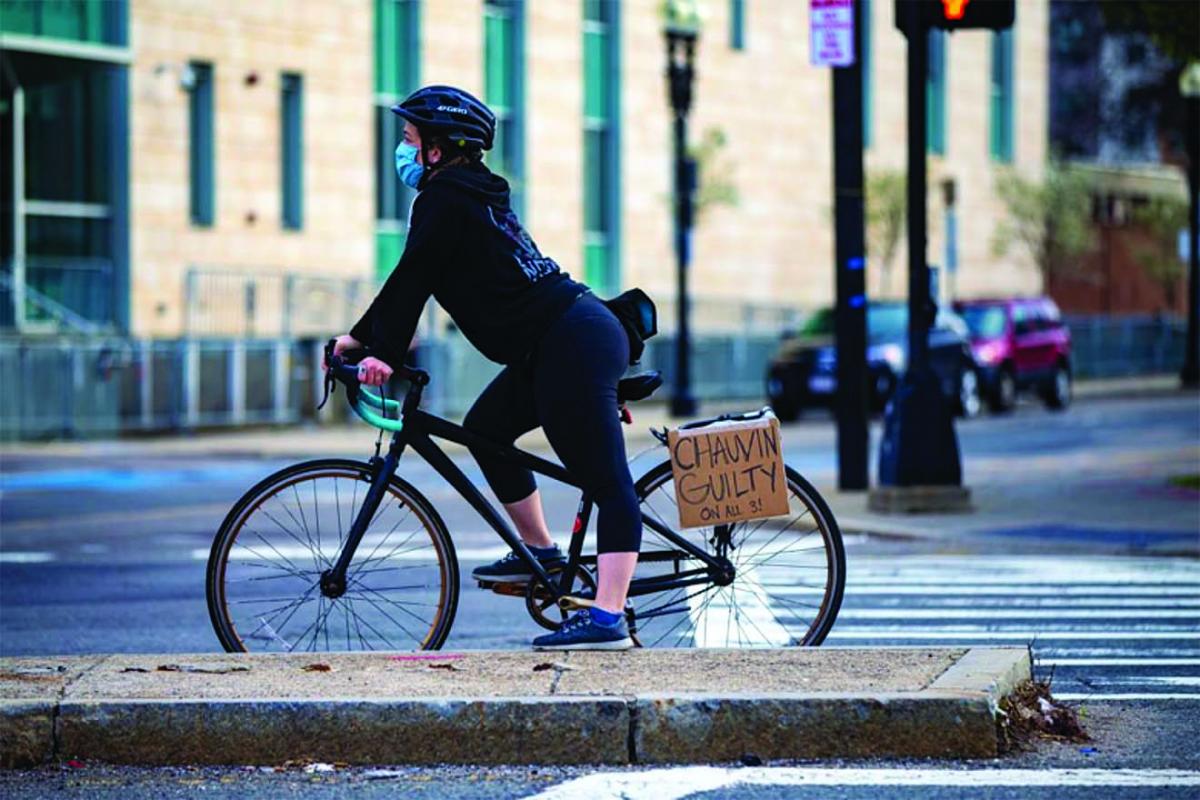 A cyclist stopped at a red light at Malcolm X. Boulevard in Nubian Square in Roxbury with a sign reading “CHAUVIN GUILTY ON ALL 3.”
Jesse Costa/WBUR photo

President Biden said the guilty verdict against former Minneapolis police officer Derek Chauvin “can be a moment of significant change” for the United States as it grapples with systemic racism.

“It was a murder in the full light of day, and it ripped the blinders off for the whole world to see [systemic racism],” Biden said from the White House, calling American racism “a stain on our nation’s soul.”

He urged Americans to confront the issues raised by Floyd’s murder. “’I can’t breathe.’ We can’t let those words die with him. We must not turn away, we can’t turn away,” he said.

Harris told the Floyd family, “This is a day of justice in America,” adding, “We really do believe that with your leadership and the president that we have in the White House that we’re going to make something good come out of this tragedy, OK?”]

In Boston’s Nubian Square, people shared news of the verdict. Michael Terry, of Roxbury, was on the bus when he heard the verdict. He said he felt happy that this trial didn’t end like others involving police — like the acquittal of the officers accused of beating Rodney King in 1992. But Terry said he›s also sad for Floyd›s family.

“Maybe that will make people change, the police will act a little more differently with people of color,” he said. “You don’t take people’s lives for a little foolish misdemeanor. A man’s life is gone.”

Kelli Ware, of Roxbury, said she was proud the jury made the right decision. She said she was yelling out her window that Chauvin was guilty.

“It’s just one step,” she said, noting that there are many others brutalized by police. “There are so many unnamed thousands. And so many here, living.”

The Rev. Willie Bodrick, pastor at Roxbury’s Twelfth Baptist Church, said the Chauvin verdict is what the community deserved.

“What we saw in George Floyd’s life being taken, it was problematic,” he said. “It was a travesty to our system. It was murder. And that’s the guilty verdict we received. And so I believe that we didn’t feel passed by in this moment.”

Bodrick said his church plans to hold a healing service Friday at 6 p.m.

In a statement, Gov. Charlie Baker, who had put the National Guard on watch before the verdicts were announced, said they showed that Chauvin was not above the law.

“But as the countless, tragic events that took place at the hands of law enforcement before and after George Floyd’s death make clear, there is much to do to correct, reform and reimagine the way law enforcement officers are trained, and how they and their departments are held accountable for their actions,” Baker said.

For Boston police detective Larry Ellison, the verdict didn’t bring relief exactly — but hope. Ellison, who is a board member and former president of the Massachusetts Association of Minority Law Enforcement Officers, wants to see lasting change in how police interact with the public.

“Is it momentary? Is there a lesson here for other police officers who act in this way — that accountability is going to be driving the day going forward?” he asked. “We are not to exact revenge, but justice on the public.”

The Boston branch of the NAACP said in a statement that the verdict signaled “hope that our country’s moral compass is not completely lost; hope that our nation can live up to its ideals and realize justice for Black lives in America.”

With reporting from WBUR’s Shannon Dooling.