Ricardo Arroyo, a Hyde Park city councillor whose district includes parts of Mattapan, is running for Suffolk County district attorney. The son of Felix D. Arroyo, the Suffolk County register of probate and himself a former city councillor, Ricardo is a former public defender who worked for the Committee for Public Counsel Services. He kicked off his campaign on Tuesday at the Birch Street Plaza in Roslindale.

Kevin Hayden, the former chairman of the state’s Sex Offender Registry Board, is serving as interim Suffolk DA. Gov. Baker appointed him after Rachael Rollins was named US attorney for Massachusetts. Hayden has indicated that he will bid for the permanent seat.

Arroyo was first elected to the District 5 seat on the 13-member City in 2019, beating his opponent by about 700 votes in a race to succeed Tim McCarthy. He won re-election last year, taking 75 percent of the vote against John White, a former laborer with Dorchester’s Local 223.

Arroyo’s district includes Hyde Park, Readville, Roslindale, and parts of Mattapan’s Ward 14 and Ward 18. He doesn’t have to give up his Council seat to run for the DA job, but if he wins, a special election will be held to replace him in District 5.

Arroyo has $89,000 in cash on hand in his campaign account, according to the latest numbers from the Office of Campaign and Political Finance.
His first meetings as a candidate, according to his campaign, will be with the Dorchester-based Louis D. Brown Peace Institute, which offers help to families of homicide victims, and the Gavin House, which provides addiction recovery services.

Chris Worrell, a staffer at the Boston Planning and Development Agency (BPDA), has started fundraising for his campaign.

Miranda, joined by fellow state Rep. Nika Elugardo, is running for the Second Suffolk Senate seat, which opened up after Sen. Sonia Chang-Diaz opted to run for governor.

The 36-year-old Worrell, the assistant director of diversity, equity, and inclusion at the BPDA who previously worked as director of constituent services for state Sen. Nick Collins of South Boston, reported raising $3,260 earlier this month in a filing with campaign finance regulators. He is the younger brother of Brian Worrell, who won a City Council seat in November representing Dorchester and Mattapan.

He could soon be joined in the race by Danielson Tavares, who has worked as the city of Boston’s chief diversity officer. The Bay State Banner reported that Tavares is expected to his entry soon.

He served as an aide to ex-state Rep. Carlos Henriquez, then joined the Walsh administration in City Hall where he was a special assistant to the mayor and deputy chief of operations before Marty Walsh promoted him to chief diversity officer.
Tavares immigrated from Cape Verde when he was a child. He went to Boston public schools and UMass Amherst.

The Democratic primary is in September, and if no Republican runs, that result will be determinative for the November election. 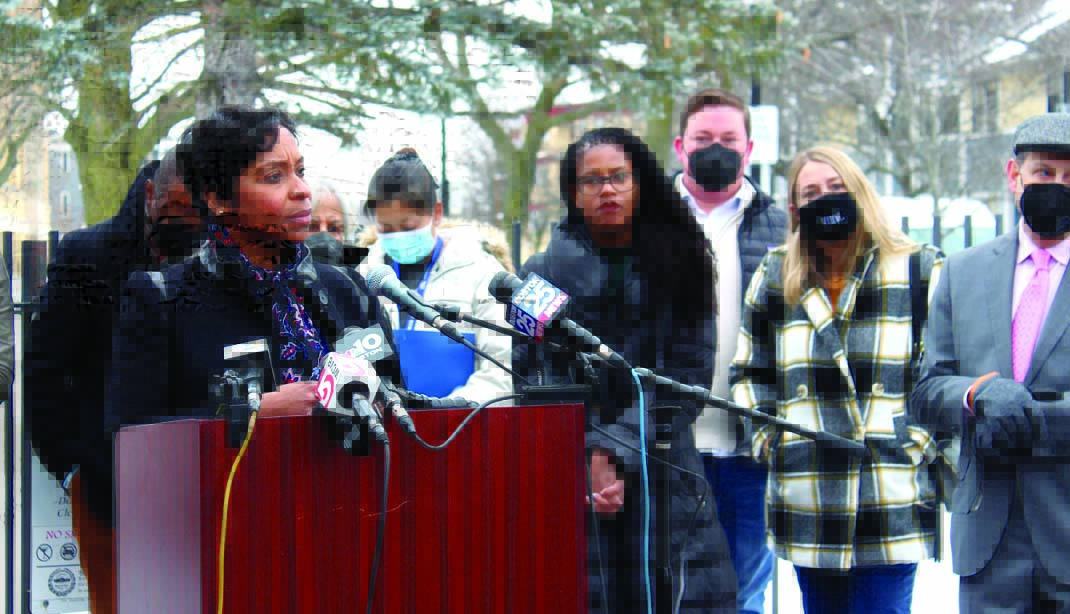 Campbell, who as District 4 councillor represented Dorchester and Mattapan for six years and placed third in the 2021 mayoral preliminary, kicked off her bid at Codman Square Park as Rep. Brandy Fluker-Oakley (D-Mattapan) and state Sen. Lydia Edwards (D-East Boston) stood behind her.

She then headed west to the Central Massachusetts Housing Alliance and the Boys and Girls of Club in Worcester, and the White Lion Brewery in Springfield.

“I’ve dedicated my life to fighting for greater equity and opportunity, and that’s what I’ll do as attorney general because the attorney general is not just the top law enforcement official of the commonwealth, she must be an advocate for fundamental change and progress,” Campbell said in a statement. “From Boston to Springfield, and Lawrence to the Cape & Islands, I will be an attorney general for justice and opportunity for all – no matter who you are, where you come from, or where you live.”

Campbell, a Boston Latin graduate who grew up in Roxbury, lives in Mattapan. She was eight months old when she lost her mother, who was going to visit her father in prison. She met her father when she was eight years old and he was released from prison. She later lost her twin brother Andre when he died in custody of the Department of Corrections as a pre-trial detainee.

A graduate of Princeton University and UCLA School of Law, she worked for Proskauer LLP and as general counsel for the Metropolitan Area Planning Commission, as well as serving as Gov. Deval Patrick’s deputy legal counsel.

In 2015, she knocked 30-year incumbent Charles Yancey out of the District 4 seat and became City Council president in 2018, the first Black woman to hold the gavel.

A statewide poll of 504 registered voters, conducted by MassINC Polling Group in January and released this week, showed Campbell with a lead in the race for attorney general that was thrown wide open after Maura Healey, the current AG, announced her run for governor.

Liss-Riordan launched her campaign earlier in January from the Ironworkers Local 7 hall in South Boston.
All of the candidates running are Democrats.

The fund for Mayor Michelle Wu’s inaugural is now up to $1.03 million, according to filings with campaign finance regulators.

It pulled in $142,000 in the latest filing, with a number of bold-faced names pitching in: New England Patriots owner Robert Kraft came up with $25,000, as did Delaware North, the company behind TD Garden, home of the Celtics and Bruins.

Other companies included MassBIO, the biotech industry trade group, Beth Israel Lahey Health, The Home Depot, and the political action committee for Dell Technologies. Developers, the Red Sox, and the Teamsters union have previously donated to the fund for the festivities.

The inaugural was originally set for January, but it has been postponed until the spring. A new date hasn’t been announced.

Healey swings by IBEW Local 103
Attorney General Maura Healey, days after picking up the endorsement of IBEW Local 103, visited the electrical workers’ union in Dorchester and took a tour of its training center.

As is customary with its endorsements, the union put Healey’s logo on its digital billboard that is visible from I-93.
The union, which says its membership includes 8,500 current members and 2,500 retirees, has previously endorsed Joe Kennedy III in his unsuccessful bid against US Sen. Ed Markey and Ayanna Pressley in her successful challenge of US Rep. Mike Capuano. In the most recent mayoral election, Local 103 backed Dorchester’s Annissa Essaibi George over Michelle Wu, who won the November contest.