Skip to main content
Lew Finfer, Special to the Reporter

Is there something in the water in Ward 17, perhaps the Neponset River that flows by it? The district, which includes Lower Mills, and parts of Codman Square and Mattapan, has been home to mayors (2), attorney generals (3), and a speaker of the Massachusetts House, among other elected officials.

Mayor John B. Hynes, who served through the 1950s, lived on Druid Street off Gallivan Blvd. When the city’s legendary four-term mayor, James Michael Curley (he was also governor in the mid-1930s and served four terms as a congressman) returned to the mayor’s office from his second stay in prison, this time for mail fraud, he said, “I have accomplished more in one day than has been done in the five months of my absence.”

He was referring to City Clerk Hynes, who had served as acting mayor while Curley was away. In 1949, Hynes, who took Curley’s public comment as an insult, ran for mayor against him and beat him, beginning his decade-long service as mayor. Francis Sweepstake” Kelly was the state’s 53rd lieutenant governor (1937- 1939) and the state’s attorney general from 1949 to 1953. He got his nickname “Sweepstakes” sponsoring legislation for a state lottery. Kelly’s home was on Morton Street, at the corner of Pleasant Hill Ave.

Edward J. McCormack Jr. also made his home on Morton Street, moving to Dorchester from South Boston in the middle of his political career.  He was the namesake son of Southie’s colorful “Knocko” McCormack and the nephew of US House Speaker John W. McCormack. He served as attorney general from 1959 to 1963.

In 1962, he ran for the Senate seat John F. Kennedy had vacated when he was elected president. With interim Sen. Benjamin Smith opting against running for a full term in 1962, Ted Kennedy, who would turn 30 that fall, entered the race against McCormack. Some campaign staffers circulated a pair of bumper stickers which read “I Back Jack,” and “But Teddy isn’t ready”

During a famous debate a South Boston High School, McCormack said, “The office of US Senator should be merited, not inherited,” adding that if his opponent’s name “was Edward Moore,” not Edward Moore Kennedy, “your candidacy would be a joke.”  But he lost as Ted’s last name was Kennedy.

In 1974, McCormack wrote a busing plan for desegregation in Boston with much less busing than other possible plans. But US Judge W. Arthur Garrity instead chose a plan with much more busing. And we all know of the divisions, heartaches, and racial violence that accompanied desegregation with busing.

Lower Mills native Joe Timilty made his home on Maryknoll Street during his terms as city councillor, state senator, and chair of the US Commission for Neighborhoods to which he was appointed by President Jimmy Carter. He narrowly lost contested races for mayor to incumbent Kevin White in 1975 and 1979.

Brian Donnelly, Tom Finneran (mentioned below), and future Mayor Thomas Menino were part of Timilty’s political organization during those years.Donnelly, of Clearwater Drive, was a state representative 1973-1978 and, from 1979 to 1993, a member of Congress where he was campaign manager in electing Tom Foley as US House Speaker. In 1993, President Clinton named him US ambassador to Trinidad and Tobago. When he came back to the state, he mounted an unsuccessful bid for governor.

Other Ward 17 notables:
• Tom Finneran of Countryside Drive was Massachusetts House Speaker from 1996-2004 and before that was House Ways and Means chair.

• Though long a resident of Savin Hill’s Ward 13, with his move to Butler Street in Lower Mills, Martin “Marty” Walsh, now lives in Ward 17. He was a state representative before he was being elected mayor of Boston (2014-2021), and is now US Secretary of Labor.

• Andrea Campbell of Groveland Street was a city councillor, mayoral candidate, and today is the Democratic nominee for attorney general. She is heavily favored to be elected to that office in November. 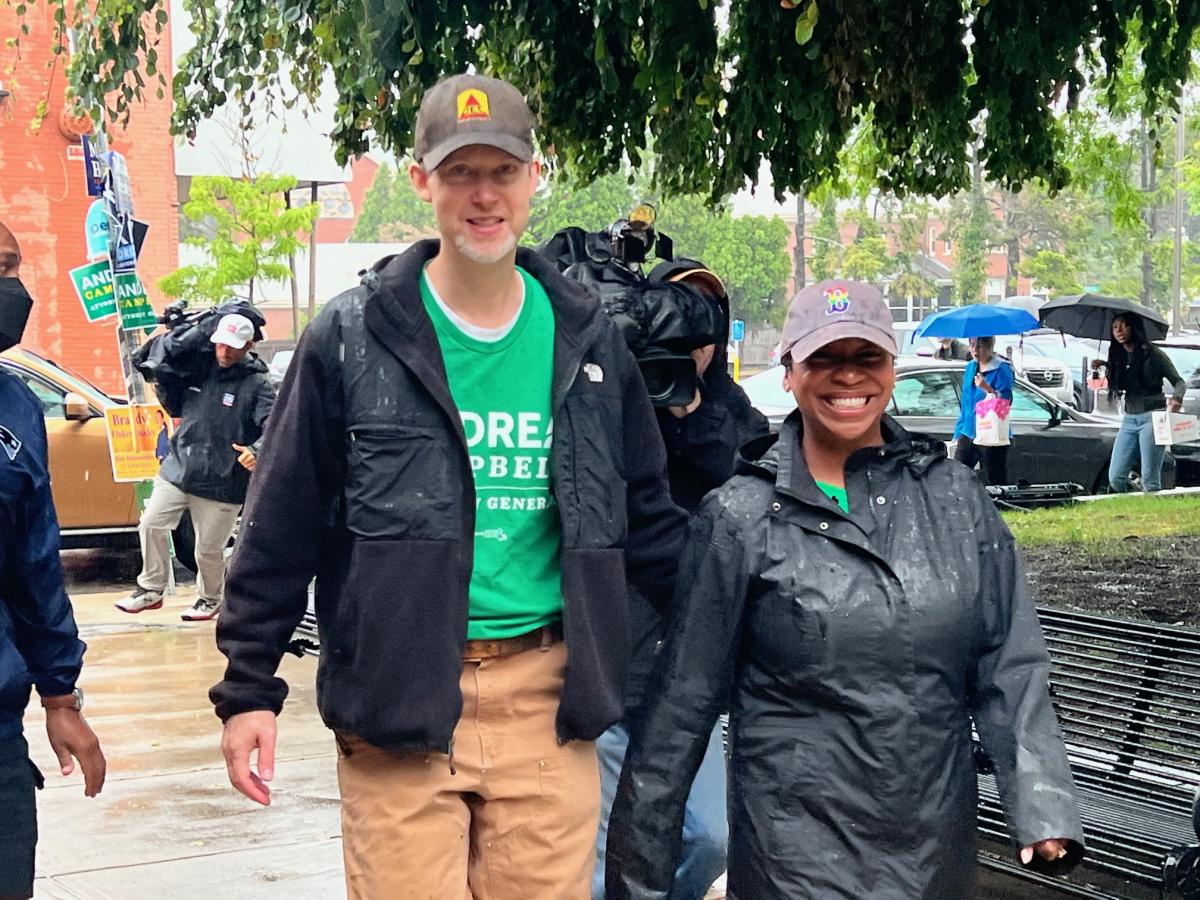 Above, Andrea Campbell, accompanied by her husband Matthew, arrived to vote at the Lower Mills Library in the Sept. 6 primary election.

Someone from Wards 13, 14, 16 in Dorchester should tell their stories like this too!!

Lew Finfer is a Dorchester resident. He received one write-in vote for Congress in the recent election and he didn’t vote for himself!