Skip to main content
Tommy McKenna, Special to the Reporter

A present-day scene for the McKennas of Train Street from the top of the stairs at #163: George, Tommy, Nancy, Jimmy, Stephen, Elaine, Marianne, Johnny, Carol, Patrice and Brian

In a few weeks’ time, probably late this month or in early July, a Suffolk County clerk working under the auspices of the Registry of Deeds will duly record a transaction between two consenting parties that will facilitate the sale of a property and parcel
of land from seller to buyer. It will be a clinical exercise in the transfer of real estate, as cold and informal as a trip to the Registry of Motor Vehicles.

That property is 163 Train St. What it will not record is the 58-and-a-half years that my family, all 13 of us at times, lived there, not including the occasional stray cat or dog that took refuge with us. My parents, George and Anne McKenna, had previously lived at 155 Train St., a beautiful two-family.

In November 1963, the folks decided to make the arduous trek and travel the 50 yards to the one-family house beside us when it went on the market. This was 163 Train St. and home to one of Dorchester’s most prominent families, the Finnegans, led by their patriarch, state Sen. Joseph Finnegan. 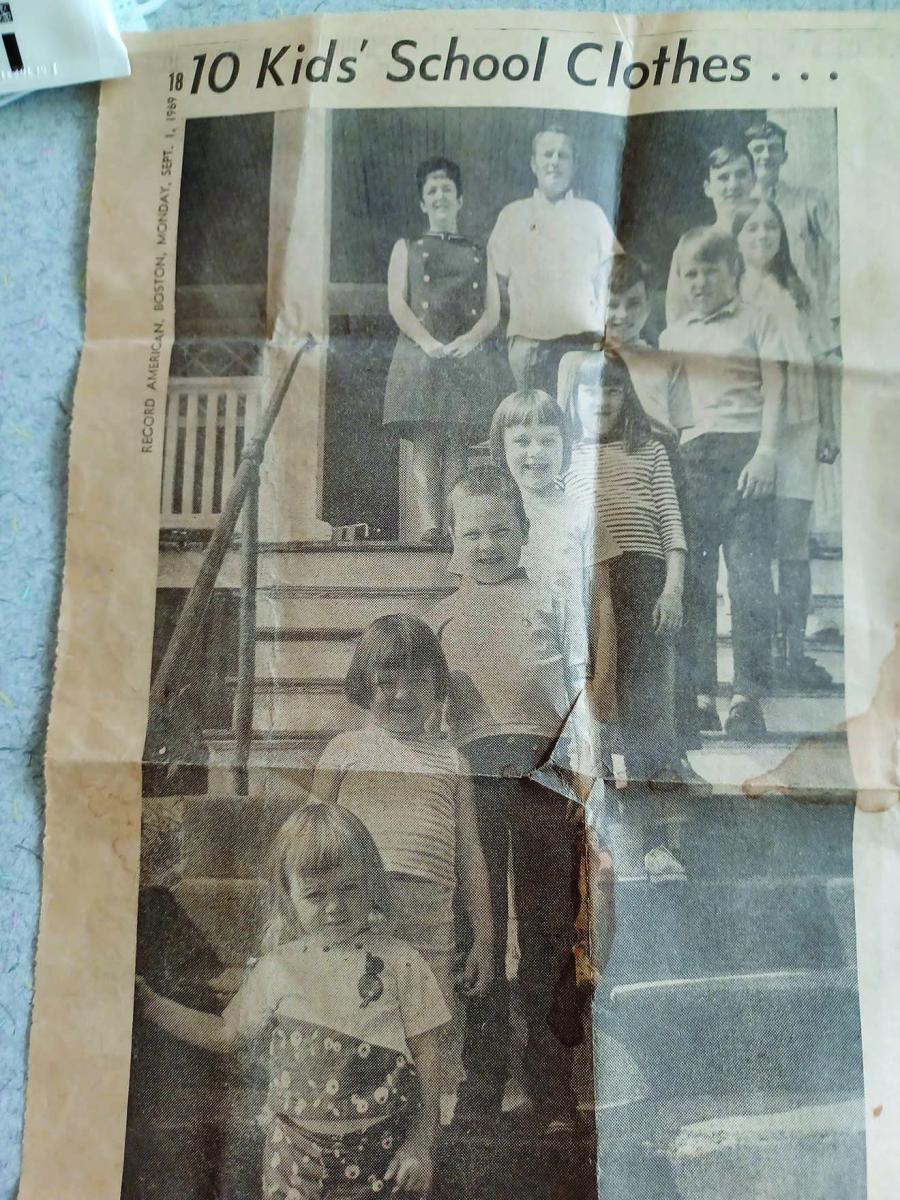 A clipping from the Boston Record American’s Sept. 1, 1969, edition.

It wasn’t a stretch for neighbors to refer to our new home as the Finnegan house for the next 30 years or so.

That didn’t bother us. On the contrary, I think my parents thought of it as elevating our status in the ‘hood somewhat. At least that’s how I felt about it. It was rumored that the senator had hosted Mayor James Michael Curley himself down in the home’s cellar for the occasional card game with their other political cronies.

It was a wonderful home, a rambling seven-room colonial with two enclosed sun porches – and one bathroom. I must admit, though, that about five years after we moved in, Dad and his best friend and co-worker knocked off a half-bath in our cellar over a few weekends and a few cases of Narragansett beer that sufficed in an emergency.

Growing up on Train Street in the ‘60s was truly a wonderful time. We enjoyed a sense of freedom that allowed us to stay out until the street lights came on and our boundaries were only limited to how far our little legs would carry us. Even the dogs roamed the streets as if they owned them. We were unburdened and untethered by any cell phones that would have given our parents instant access to us, and our GPS coordinates.

The poor kids today, chauffeured everywhere and shackled to their devices. They’re not on the streets and the neighborhood parks.

Train, Arbroth, Boutwell, Manor, Westglow, South and North Monroe streets teemed with friends and classmates we could run with. And 163 was the center of our universe. A place where for 58 years, the family celebrated birthdays, Christmases, Easters, Halloweens, weddings, births, deaths, proms, graduations, the Sacraments, new jobs, fighting over clothes, and a lot of Irish music, especially on Saturday afternoons.

163 Train St. was more than a house though. It was a place where we grew from childhood to adolescence to adulthood. It was a place where love was as plentiful as the cherries that we picked from our backyard trees in mid-July. We mowed our neighbors’ lawns in summer and shoveled their walks in winter, the proceeds from our labors usually spent on tonic and Drake’s Cakes.

Then we had acorn fights in the fall and snowball fights a few months after that.

We played baseball/whiffle ball in Keough’s back lot and made forts constructed of branches in Manor street backies. We celebrated Fourth of July bonfires down the Hemmy, (pre-p.c.) and ice skating down the Garvey at the Devine.

The great St. Ann’s school saw the eleven of us pass through its doors for the princely sum of ten dollars per kid per year, a steal for the solid, Catholic-based education it provided. God bless those Sisters of St. Joseph, teaching 40 kids per class, without any aides to help them in a pre-Prozac age.

We had it great. Another thing the Registry can’t record is the number of fantastic neighbors we had, the number of lifelong friends we made there, and a lifetime of memories to always cherish.

In 1969, I suppose a guy who knew a guy who knew a guy with ten kids approached my father about doing a Going Back to School feature in the Record American centerfold. The article centered on the cost of outfittingy a family of ten kids going back to school, and I imagine the piece would be considered “good copy” as many other families would be able to relate.

The newspaper sent out photographer Leo Tierney to 163 Train to take pictures for the picture story that ran on Sept. 1, 1969. Some 53 years later, we thought it would be a good time to re-create the photo to coincide with the sale of the house. We lined up by age, youngest up to oldest. Readers may note that in the more recent photo, there are eleven of us instead of ten. Our brother Brian, the family’s youngest, was born about a year after Leo Tierney took his picture.