Dorchester’s Pamela McGee plugs in her new Mustang EV car at the new Electrify America charging station in the parking lot of the Bank of America on Gallivan Boulevard. It takes about 30 minutes and $12 to charge her EV at the site. Seth Daniel photo

The world of Electric Vehicles (EVs) is a mysterious environment to many, but an increasingly certain future for all of us. City officials and a growing number of Boston residents are already living the life of noise-reduced rides and battery-charging stations.

When Dorchester’s Pamela McGee began looking for a new vehicle this year, she “just figured” an EV “would be something new and the way of the future. I was concerned that if I didn’t go electric, there would be no trade-in value for a gas vehicle in the next few years.”

McGee had no idea how charging or “filling up” would work, but after a month of driving her new EV, she said that charging has been inexpensive and convenient. Her biggest obstacle was finding one to buy. While she was looking for a traditional SUV model, none were available, but she came across a Ford Mustang SUV Mach-E GT in a showroom and jumped at the opportunity.

McGee and many Dorchester residents maybe unknowingly live near Electrify America’s first electric “gas station-like” experience in Boston, which is set in an underutilized corner of the Bank of America’s Gallivan Boulevard parking lot. 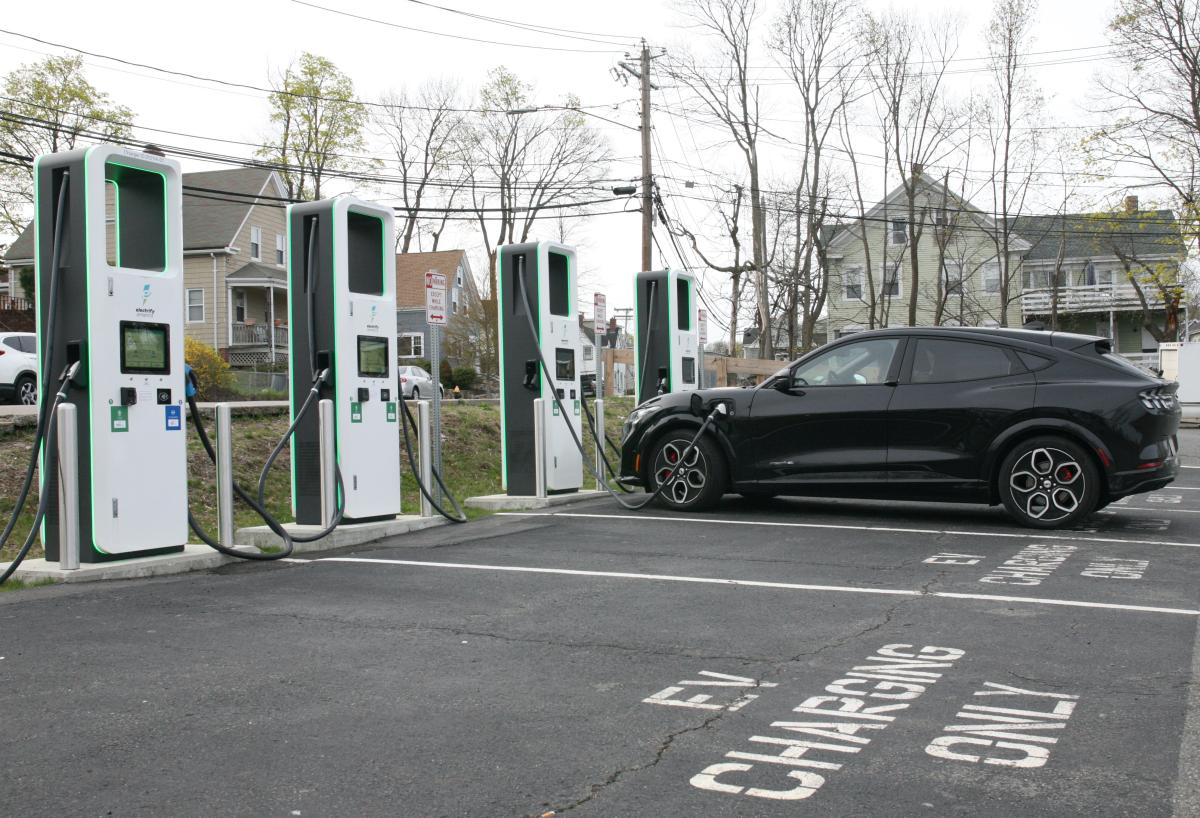 Last Monday, she stopped at the private Electrify America facility, which offers four fast-charging outlets. She said she uses the station frequently as one of several charging options. In about 30 minutes, and for around $12, she can get an 80 percent charge, she said.

“It’s far more convenient than I thought it would be,” she said. “I can come here to charge it fast, and other times I can just plug it in at work and head into the hospital for my shift. It’s charged when I leave. There are a lot of options and I like this station because it’s fast and I live very close by.” Normally, she said, she catches up on e-mails or makes phone calls while she waits – occasionally, she runs errands.

But most of the time, she charges at work where there’s a $1 fee to plug in. She said she also uses an adapter at her home overnight, but she isn’t as happy with the results.

A typical week of “fuel” can be either $1 at work, or around $12 at the fast charger. That, she noted, is in contrast to the price of gasoline down the boulevard at several gas stations where it’s over $4 per gallon. “It’s not like I don’t have any power in this thing; it’s like 480 horsepower,” she said with a laugh.

When it comes to charging EVs, most people with one have grown used to the city providing free electric chargers and other such infrastructure. That, of course, brings up issues of siting and equity into most conversations about the vehicles. According to Boston’s Chief of Streets Jascha Franklin-Hodge, the city is thinking about such things. However, the more complete answer is that the city hopes they may not have to do so in the future.

Franklin-Hodge said the city has “no doubt” that many EVs will be on the streets in the next few years, noting the strong advertising push during this year’s Super Bowl. “We are headed into an electric vehicle future very, very rapidly if for no other reason than the auto makers have plowed all of their [research and development) money into electric vehicles,” he said. “If the electric vehicles don’t come onto the market the way they think, they will honestly have nothing to sell you…The change probably happens slowly, and then it happens all at once. I think we’re probably close to that tipping point in the next year or two.”

So, while the city is “all in” on EVs, he said, officials have a different view of how things will shake out for residents.
“I think the challenge with EV is everyone is really thinking about this in the same way that we think about fueling up our cars with gas and the paradigm about where gas stations are located,” said Franklin-Hodge. “But how we will fuel our EVs will be fundamentally different.”

For the most part, he said, those looking down the road believe that those with access to garages, driveways, or work chargers will “fill up” their vehicles overnight or, like Pamela McGee, while at work. That will provide access for most of the charging public, he said. Most home chargers are sold as adapters for regular plug-ins and are of the slow-charge variety – taking seven or eight hours to fully charge a vehicle.

The trouble, however, comes in places like Dorchester or Mattapan where parking is on the street, and very often not in front of drivers’ homes.

Private firms, fast chargers
The city and many EV advocates see a future where private businesses and work chargers will provide for most people, and the city will fill in gaps with its chargers.

That future has already arrived at Electrify America’s Dorchester facility. As the technology has developed rapidly over the last six months, new EVs have come out with fast-charging capabilities – with 150kW or 350kW charge capabilities known as a “fast charge.” Electrify America officials said that for a paid fee at the “pump,” their 150kW chargers on Gallivan Boulevard can offer 7.5 miles of charge per minute, or about 150 miles in 20 minutes, meaning a driver could drop off the car for a charge while hitting nearby pharmacy or grabbing a cup of coffee.

Franklin-Hodge said the Dorchester location is a sign that private companies are finally starting to see charging as a good business, much in the same way that owning a gas station in the early 1900s was a good business.

“They have essentially created a gas station for electric cars in part of the parking lot that the bank didn’t use very often,” he said. “That becomes probably the best option for people who can’t charge at home or at work. That’s the model we see as coming to dominate the charging options for people who don’t have at-home or at-work charging capabilities…My hope is that long term, you will see this become enough of a business that the city won’t have to be the driver in getting charging stations in locations.”

Officials from Electrify America said the station, one of 800 it now has placed nationwide, was located there to be close to an urban center in a busy neighborhood next to a major highway.

“Electrify America uses a data-driven process to determine where to install charging stations - looking for convenient, easily accessible locations across a variety of businesses,” said spokesperson Gabby Jurkiewicz. “We know the Dorchester Bank of America location is in a high-traffic area near a major highway [I-93] and allows EV drivers to charge while completing everyday tasks like banking.”

And for city officials? “Right now, we see ourselves as the catalyzer for people to feel comfortable going with EVs,” Franklin-Hodge said. “We want people to look at a map and see there is a charging station around the corner from their house and feel like they can buy an electric vehicle. In the future, though, I think [charging services] will be a broad mix of public and private.”

The role of public charging
When it comes to city charging stations, though, some, like Meg Campbell of Jones Hill, wonder if the city is thinking enough about equity in locating chargers. She said she worries it might not be on their radar.

“A major consideration when purchasing an EV is your plan for charging the battery,” said Campbell. “Easy access and proximity to electric charging stations means the difference between purchasing an EV or not…If you live downtown, Jamaica Plain, Roslindale, South Boston, Brighton, or in the South End, you have good access to EV charging stations. If you live in West Roxbury, you likely have a driveway where you can install your own EV charger. But if you live in Dorchester, Roxbury, or Mattapan, you’re out of luck,” she said, noting that it’s unlikely your three-decker or older apartment building has access to on-site parking with an EV charging station.

Campbell said she hopes the city will consider implementing charging stations at public school parking lots to serve the school community during the day, and the general community in off-hours.

“Staff could charge cars while at work, and neighborhood residents could charge their electric vehicles after school hours and on weekends,” she said. “What if the city not only made this a priority, but also publicized the rapid timeline for installation? This idea is a perfect example of an initiative City Hall – not the School Department – should launch, implement, and maintain as integral to climate mitigation as rapidly moving to a fleet of electric school buses.”

Franklin-Hodge said there is a ton of thinking going on ought about this issue, even if it might not be heralded from the top of City Hall just yet. He said the city implemented an EV Readiness policy in 2020 requiring all new projects going through the Article 80 development process (mostly large projects with parking) to provide charger plugs at 25 percent of all parking spaces, and to equip the remaining 75 percent of spaces to be charger ready.

Because most large projects are in the downtown neighborhoods, the new policy can seem to skew availability on charging maps – though Franklin-Hodge said they haven’t forgotten about Dorchester, Mattapan, and other dense neighborhoods. While he doesn’t believe most EV owners will rely on the city chargers, he said they do see them as a way to fill gaps within charging deserts.

“One thing we’re looking to address first and foremost…will be locations where we have space. That means municipal parking lots,” he said. “The good news is most of those are in neighborhoods. They’re also in business districts…I think if you look at the map of city lots, they’re not on highways or big shopping centers. That means the city will try to step in and fill the gaps no matter what the neighborhood.”

The city has 13 charging locations with 66 plugs (many locations have multiple plugs). In Dorchester, the city has medium speed chargers in municipal lots on Hamlet Street in Uphams Corner, on River Street in Mattapan Square, and on Adams Street in Fields Corner. Later this year, 18 medium-speed charger plugs will be installed on Bowdoin Street and another set in Codman Square. Four fast-charging stations will be installed in the Hamlet Street lot next year.

Franklin-Hodge said he encourages anyone looking to replace a car to go with EVs. He said the city does push alternate transportation, but it doesn’t expect that drivers will go away.

“EVs are critical piece of the work we need to do to address climate change in Boston,” he said. “We want to reduce the driving that happens…but we know there are people who drive, will drive, and need to drive…We’re really all in on this from the city perspective in electrification of our own fleet, and for residents and businesses, too.”

City charging stations aren’t often as fast yet as private stations but are free of any fees. This charger is a medium-speed charger located in the municipal parking lot in Fields Corner. Several city-owned chargers are in Dorchester and Mattapan, with others coming within 12 months. City officials see their charging stations as a way to fill in the gaps for EVs, and not to be the main source for the charging public.Seth Daniel photo