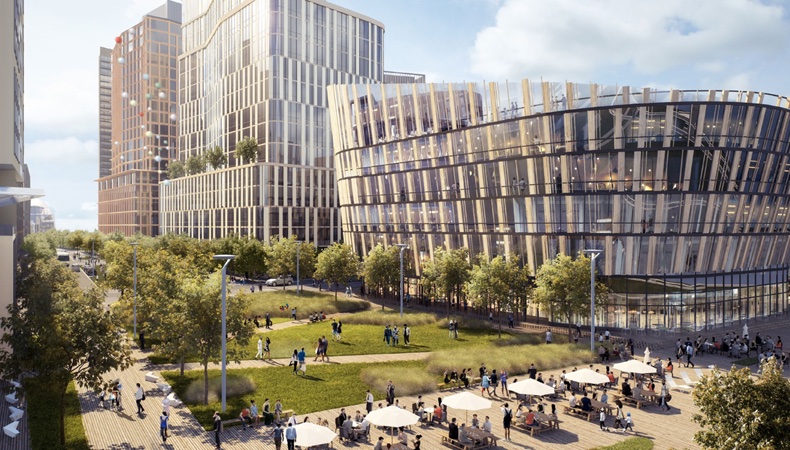 Above, a rendering of Dorchester Bay City.

In the early 1970s, large chunks of the Columbia Point peninsula remained a barren moonscape. Even as UMass Boston’s campus started to carve out its own fortress-like-foothold, the former landfill was seen as a decrepit no man’s land.

The John F. Kennedy Library, then still on the drawing boards, was bound for the banks of the Charles River on the Harvard University campus, where JFK had studied history before shipping off to war. The idea of building a federally funded monument to the slain president on this forlorn peninsula in Dorchester was laughable.

But, before the decade ended, there was President Jimmy Carter standing up at the dais, backdropped by IM Pei’s iconic white edifice, dedicating the JFK Library. In Dorchester.

How that happened has been told in the pages of the Reporter before and it has a good deal to do with the NIMBYism and short-sightedness of our friends in Cambridge. But it also happened because Dorchester people— seizing upon the Kennedy family’s Dot roots— made it their mission to sell Columbia Point as the location.

Fast forward fifty years. On Monday, according to The Boston Globe, a cadre of power brokers huddled up at the UMass Club in Boston to strategize on luring a new federal prize to the state: a biomedical research agency that the Biden administration calls the Advanced Research Projects Agency for Health. It’s essentially Biden’s answer to Kennedy’s Apollo mission. But instead of racing to the moon, Biden wants the $1 billion research agency to cure cancer and other chronic diseases.

Monday’s powwow, according to the Globe, included Gov. Baker, US Sen. Ed Markey, members of Congress, and leaders from business and academia, including Marty Meehan, the UMass president, who, the Globe says, has been charged with getting buy-in for the state’s pitch from other universities.

There’s no mention of it in the Globe story, but Columbia Point should once again be at the front of the minds of everyone who met on Monday. And if it isn’t, it needs to be.

At the moment, the city’s planning agency is in the final stretch of reviewing initial plans for Dorchester Bay City, the 34-acre development that includes some 20 acres of land leased from UMass. The deal will be a windfall worth hundreds of millions for the Dorchester campus, which needs the infusion to further improve its own campus.

In March, former UMass Boston Chancellor Katherine Newman co-authored an op-ed in the Reporter that made the case for Dorchester Bay City as a catalyst “for long-term racial and class integration of biotech.”

She’s right. This time, our neighborhood shouldn’t be an after-thought or a runner up in the race for a federal designation. If our leaders move jointly and judiciously, there’s a tremendous opportunity to bring this agency within Dorchester Bay City. Let’s make it happen.