The Bayside site is shown during demolition in 2016. Griffin Connolly image

The infusion of more than $200 million in funds generated by the lease of Bayside to a private development team will be a game-changer for the Dorchester campus that has struggled with creeping debt and a crumbling foundation, according to UMass Boston’s interim Chancellor Katherine Newman.

“I couldn’t be more excited. It’s a brand new day,” Neman told reporters gathered outside a board meeting where UMass trustees approved a tentative lease agreement with Accordia Partners. “This is the first day of the next iteration of UMass Boston.”

Related: Students react to the news on campus

UMass President Martin Meehan called the deal “the most significant positive development in fifty years for this campus.” Newman told reporters that funds yielded from the lease agreement will eliminate the campus’ need to borrow more money for a $155 million reconstruction project that fix the original substructure on the main campus. Governor Baker, she said, has already allocated $78 million for the substructure project. Some of the new monies from the Bayside lease will be directed to pay for the balance of that job, she said. 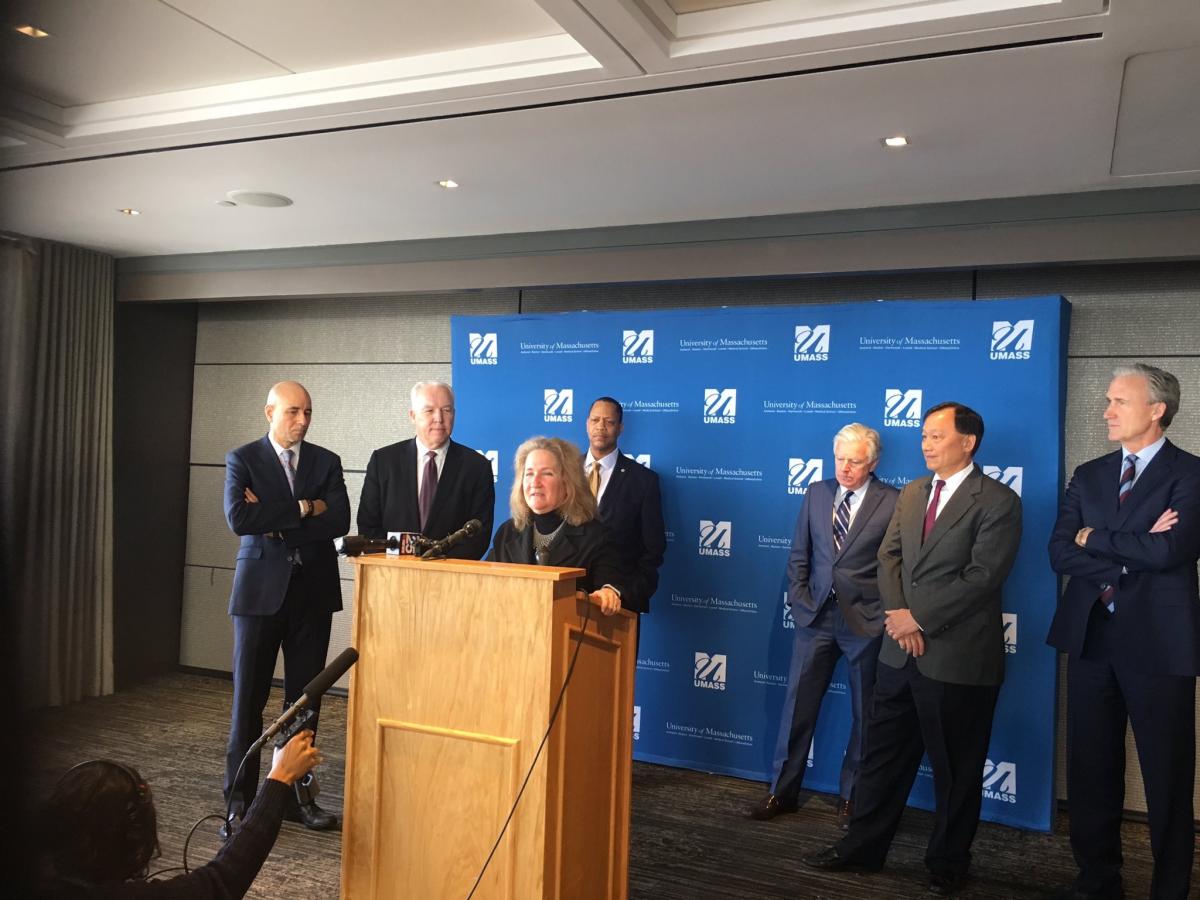 “We couldn’t talk about it until now,” Newman said, “but this will allow us to complete that substructure project that has been a monster and very debilitating. From my point of view, this is a whole new lease on life.”

“We have to wait for the process to end,” Newman added, noting the permitting for the Bayside lease and new construction there may need to happen first to unlock some funds. But she added: “We can look forward to the point in which these funds will help us.”

City Councillor Frank Baker, who also addressed media following the board vote, hailed the lease decision as good news for the university and the neighborhood he represents. Baker acknowledged that he and other residents had been concerned when UMass took ownership of the Bayside site in 2010, fearful that it would “be a parking lot for rest of our lives.”

The development team, Baker says, is committed to transforming the site into a vibrant mix of uses.

“The neighborhood will benefit from transportation and job pathways that are created,” said Baker. “This will bring Dorchester, UMass and the city of Boston into 21st Century.”

One element of the Accordia bid that lifted its prospects was a commitment to contribute $25 million to “infrastructure” improvements around the site. While there is no specificity yet on how those funds might be used or leveraged, Accordia partner Kirk Sykes indicated that it would be a “great start.”

“We view the $25 million as a down-payment on creating a public private partnership that will source other state funds,” says Sykes. “There’ll be a lot of focus in coming months.”

When asked by the Reporter if the Accordia team would seek to assemble other local stakeholders — including the new owners of the former Boston Globe site—into that effort, he said they would.

“We will have conversations with all of those developers and stakeholders,” Sykes said.

Councillor Baker added that state and city elected officials would need to play a role in coordinating such a collaborative effort to leverage additional state monies.

“If we don’t address Kosziusko Circle , JFK station, and Morrissey [Boulevard] we could potentially be stuck there on our side of the city if we get a whole lot of development,” Baker said.

Marty Meehan said the UMass officials have already been talking about the infrastructure needs with the Baker administration.

“We are confident that this major development will result in significant public investment in infrastructure as well,” said Meehan.

Sykes told reporters that he believed that the final lease agreement for the Bayside site should be completed within 60 days.